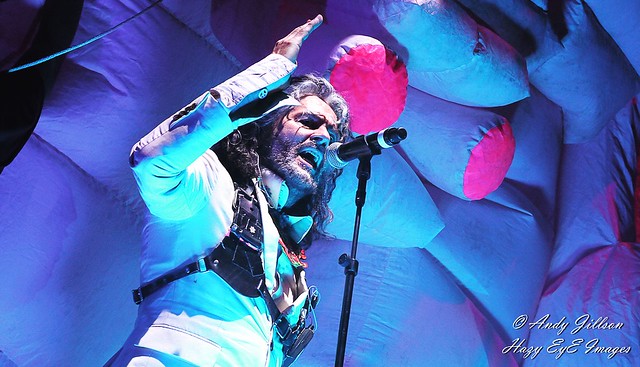 The Flaming Lips have embarked on a short psychedelic summer tour with The Claypool Lennon Delirium, and I was able to obtain a photo pass and attend their show at The Stone Pony Summer Stage in Asbury Park, New Jersey, recently. A long drive, but well worth it! This band never disappoints.

Yep, once again I was fortunate enough to see The Flaming Lips up close and personal while rocking out in the photo pit on July 28. I was also able to chat with them a bit after their always satisfying live performance. The fans were blown away and the band seemed to be in high spirits.

The Flaming Lips are out on tour in support of their most recent studio album, King’s Mouth: Music and Songs. The setlist from their show at The Stone Pony Summer Stage featured songs from the newest album, but also included songs off Transmissions from the Satellite Heart, The Soft Bulletin, Yoshimi Battles the Pink Robots, and Oczy Mlody.

Stream King’s Mouth: Music and Songs by The Flaming Lips on Spotify:

Multi-instrumentalist Steven Drozd is with out a doubt one of my all-time personal favorite musicians — not too mention one of the most talented musicians and a hell of a guy! His drumming fucking blew me away when I first listened to Transmissions from the Satellite Heart (around ‘93-‘94).

Drozd has the voice of an angel too, and can play keyboard and guitar just as well as he plays drums and sings. That’s not to say lead singer and guitar player Wayne Coyne and the other five members of The Flaming Lips don’t pull their weight. The band as a whole blend together beautifully and create a warm audio group hug with their live musical feel.

If you haven’t seen The Flaming Lips live, you have failed as a concert-goer. They are still one of the best live acts. Luckily for us, the band seem to always be on the musical hustle. The Lips play plenty of live shows and have a wealth of unique rock music for us all to relish in.

Hard to believe that after about 35 years since being conceived, the psychedelic love-bombers who are The Flaming Lips show no signs of slowing down and no signs of burnout. They’re humble musicians producing energetic uplifting American rock music. Not an easy feat by any measure. Y’all need to get your asses up and go see The Flaming Lips!

Enjoy a few of my favorite Flaming Lips’ music videos!

“Race for the Prize”

“The Sparrow Looks Up at the Machine”

Here are some more photos of The Flaming Lips performing live at The Stone Pony Summer Stage on July 28, 2019. All images copyright and courtesy of Andy Jillson.