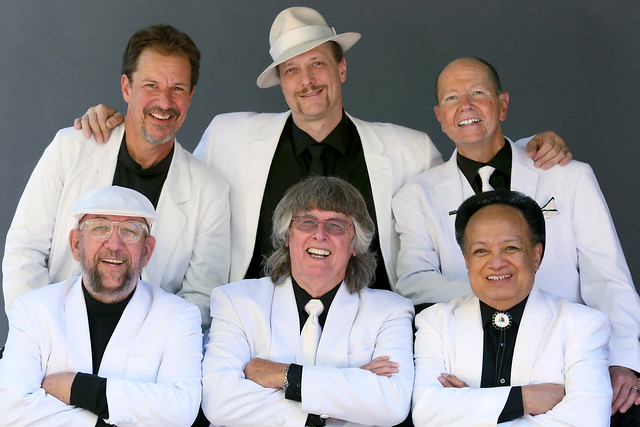 For 54 years, The Association has made and played hit pop. Their song “Never My Love” came in second on a 2000 survey of the most played songs on radio, TV, and film after the Beatles’ “Yesterday.” In an appearance at The Birchmere recently, bass player Del Ramos dedicated the song to our troops, veterans, and first responders, and to his 99-year-old mother, whose name, he said, is “Mom.”

On July 29, The Association opened its set with “Windy.” Keyboardist Jordan Cole, the newest and youngest member of the band, played the flute on the number. After “Just About the Same,” Jim Yester remarked that The Association was founded in 1965, and that many in the audience were of a similar age as the band. “I want to thank you for staying up this late to see the show,” he said.

Founding band member Terry Kirkman wrote “Everything That Touches You.” Jim said that Terry retired from music in 1984 to become a substance abuse counselor. The band, he quipped, prepared him well for that career.

In 1967, Jim told the audience, the band got to open the Monterey Pop Festival, and they got to watch great act after act. This was a real treat, as they really got to see other bands play. They opened the festival with “Enter the Young.”

When The Association got together, playing covers wasn’t acceptable. Bands were expected to do their own material, Jim explained. But that’s changed, and The Association enjoys playing some of their favorite tunes by other bands. Inviting the audience to sing along, they played a spirited rendition of “Walk Away Renee.”

When they finished playing “Never My Love,” Del recalled an episode long since passed. A girlfriend convinced him to go a celebrity costume Halloween party in what must’ve been sometime in the early ’70s; Del joined The Association in 1972. He spotted a plant from a distance, and the plant kept larger. The plant wrapped its arms around him and spoke words of encouragement, telling him to keep up his work with The Association. He recognized Mama Cass Elliot from The Mamas and The Papas. The Association played more shows with The Mamas and The Papas than any other band. Mama Cass passed away in 1974. In tribute, the band played “California Dreamin’.”

Stream Live, a live album, by The Association on Spotify:

Paul Holland, one of the band’s three guitarists, talked about 45 records — the ones with the big holes in the middle — and about singles. Singles, as he said, came with an A side, the promoted song, and a B side. B sides could be wonderful, and they could also be terrible. The B side of the single “Never My Love” was a baroque pop tune called “Requiem for the Masses.” The Association got lucky with this song, and it became very popular, especially with the soldiers in Vietnam. Doing his best (which could also be seen as his worst) Nixon impression, Paul mocked the reactionary president’s characteristically paranoid reaction.

Jim introduced the next song, “Six Man Band,” as “having a little math, because there are six of us.” For most songs, The Association had three guitars, bass, keys, and drums, but Jordan played guitar here. Recalling the song’s premiere on The Ed Sullivan Show, Jim imitated the show’s famous host.

After “Six Man Band,” The Association played a couple more of their tunes, “Learn How to Land” and “No Fair at All.” Jules Alexander, the band’s lead guitarist and vocal arranger and a principal songwriter, addressed the next song, “Dubuque Blues.” Curiously, he was in New York, and falling in love with the city, so he decided to write, of all things, a tribute to a small Iowa city.

Jim told the audience that, in the studio, a band hears a lot of demos. If something doesn’t catch the band’s attention in the first 15 seconds, it’s on to the next number. This can lead to missing some great songs. The Association passed on “Joy to the World” and “The Air That I Breathe.” Mocking himself as much as The Eagles, he briefly sang a bit of his Desperado parody, “Avocado.”

Some years ago on the road, one of the members of The Association was watching TV in his hotel when the ’80s film The Big Chill came on. The band gathered to watch it, not because they were particularly enthralled with the movie, but because the music  was great, and it was all music by their friends. In a tour de force, the band went through a series of covers, many of them influenced by the film, beginning with “I Heard It Through the Grapevine.” They mentioned that their favorite version was not Marvin Garye’s or Gladys Knight’s, but the rocking rendition by Creedence Clearwater Revival.

Without a pause, The Association moved right on to the Beach Boys’ “Wouldn’t It Be Nice.” Del sang lead on “My Girl,” and the drummer sang lead on “Bad Moon Rising.” Rolling on, next up was the Band’s “The Weight.” The audience clapped along to “Joy to the World,” and, as the extended medley wound down, some in the crowd rose to their feet.

The mirrorball descended for “Cherish.” Jules told the audience that Jim comes from a musical family; his father can be seen playing in a John Wayne film. Jim, an Alabama native, began playing Lynyrd Skynyrd’s tribute to his home state before being cut off. Someone in the audience shouted “Play Freebird!” eliciting laughter from both the band and their fans.

Jules told the audience that half the stations in the country refused to play their first big hit, “Along Comes Mary.” My companion for the evening remarked that the Bloodhound Gang covered this for the soundtrack to the classic stoner comedy Half-Baked. Jules joked that The Association were and still are a drug band, but now they take drugs for high blood pressure, erectile dysfunction, etc.

Formally, “Along Comes Mary” closed out The Association’s set. They didn’t go through all the hullabaloo of leaving the stage, and for an encore, they played “Goodbye Columbus,” written for the 1969 film adaptation of Philip Roth’s award-winning book.

These guys have a lot of great stories, have a well-honed stage presence, and they know how to please their audience. After all their decades on their road, they have it together. They know what they’re doing. They’re consummate pros with excellent material who put on a great show.