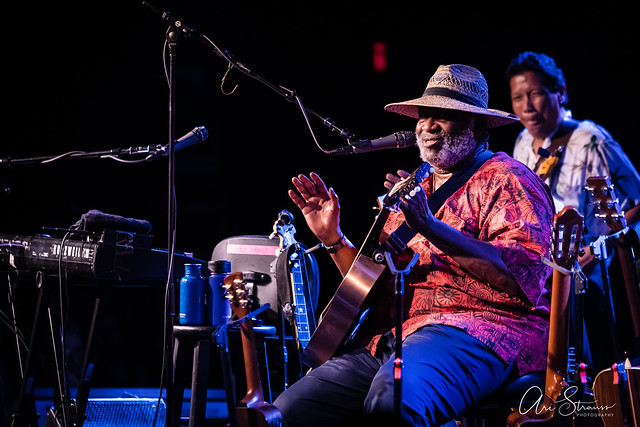 There is a moment in The Empire Strikes Back when Yoda transforms into a being of incredible, transcendent power. Something very similar happened when the Taj Mahal Quartet picked up their instruments and started to play at The Birchmere recently.

Taj Mahal is a legendary bluesman, and he is a virtuoso on the resonator and pedal steel guitars. For more than 50 years, Taj has mined tradition and pushed it forward to new horizons, using all the formidable gifts at his disposal.

Looking loose and comfortable on July 25 at The Birchmere, Taj opened the set with “Good Morning Miss Brown,” drawing applause for his mind-bending solo. I was hooked, so drawn in that I briefly forgot to track Taj’s songs, simply letting myself get carried along in the music. Later, someone mentioned that he played “Cakewalk” early in the set as well. A few songs into his set, Taj elicited even more applause from audience. He went through about four songs before he took a break about to talk to the credit, and before he really started bringing out his mischievous personality.

Before he played “Freight Train,” the Harlem-born musician brought up that he once lived in the DC/Virginia. “My lady was from North Carolina,” he told the audience. Introducing the next song, he mentioned that his legendary album, Giant Step, turns 50 this year. “I had at least 15 into the game,” he said, “before y’all caught up with me.” While Taj can be feisty and funny, he is also fiercely intelligent and formidable.

Stream Giant Step, the 1989 release of the album, by Taj Mahal on Spotify:

The audience clapped for the opening notes of “Fishin’ Blues,” one of Taj’s signature tunes. Taj had a laugh after that, playing the opening chords of “In-A-Gadda-Da-Vida.” An interviewer asked him what it was like when rock ’n’ roll came along. Taj said that he was 17 when rock music along, and he’d been listening to artists like Louis Jordan and Sister Rosetta Tharpe. “Rock and roll,” he said, pointing his finger, “was when they decided they could sell it to you!”

A woman in the audience shouted a requested for his song “Corinna.” Taj said he’d do it, but there was a “quid pro quo.” He said that, one day, he wanted to look over that woman’s shoulder when she shouted a request at Mick Jagger so he could he see how that went. He honored the request, though, and “Corinna” was a beautiful song. At the end, Taj made a few notes like a bird song.

Taj shared the story behind his preferred instrument, the resonator guitar, which goes back to the early days of recorded music. As he explained, acoustic guitars didn’t have enough volume to be heard on recordings that also included orchestral arrangements. Various solutions, like archtops, added, he said, “a little on the top,” but they didn’t completely fix the problem.

The Dopyera brothers, immigrants from Slovakia, invented the resonator guitar, which is much louder than a standard acoustic guitar. As seen in the photos, the resonator guitar has a metal rather than a wood body. Taj explained that the National String Instrument Company had a patent for nearly 100 years on the tri-cone style of resonator that he uses. (The more familiar name dobro, often associated with the resonator guitar, is actually the name of the single resonator cone guitar patented and manufactured by the Dobro Company.) That patent ran out about 10 years ago, allowing other manufacturers to build their own tri-cone resonator guitars.

Taj was quite happy to see National’s patent run out. Because of their exclusivity to National, the guitars were quite expensive. Like any guitar, they degrade with age and use, especially when they have to be checked and are subjected to the tender ministrations of, to quote Taj, the “bionic gorillas” working as airport baggage handlers. While he uses a rather sturdy case and estimates that you could drop it from “10,000 or 12,000 feet” without damaging the guitar inside, it still takes a beating over time.

“If daddy isn’t to do good, momma will let daddy know,” Taj teased. For the next song, he said, he was “gonna put some jerk on,” referring to the Caribbean flavors in “Wild About My Livin’.” A major part of Taj’s legacy has been incorporating world music — music from Africa, the Caribbean, and the South Patific — into the blues.

Taj said he’s been listening to stuff that’s “100, 600, or 700 years” old. He mentioned a friend, who went unnamed, who was the 71st generation in his familial line to play in his musical heritage. That friend, Taj said, recently passed away, and his son took up the tradition, becoming the 72nd generation to uphold the tradition.

Taking up the pedal steel guitar, Taj said he was going to play two instrumental numbers. He introduced the first as “Zanzibar.”

Prefacing the second instrumental, Taj addressed the women in the crowd, saying, “I do believe a change has come under my thumb.” Chuckling, he said, “Let’s try this again: ladies this is for you,” and began playing the instantly recognizable ’50s country waltz “Sleepwalk.” Taj’s rendition was, quite simply, remarkable. As often as this song gets played, I’ve never heard it any better. Taj bent his notes to a high whine unlike anything I’ve ever heard.

After “Sleepwalk,” Taj introduced the rest of the Quartet, then went into his song, “Checkin’ Up on My Baby.” Someone shouted a request for “Black Jack Davey.” In a high-pitched, mocking voice, Taj replied, “If you say so, sir,” and queued up the band.
Moving right along, he said the next song, “C.C. Rider,” is “where the blues intersected popular in a funny way, via a popular dance called the Stroll.” After “Lovin’ in My Baby’s Eyes,” Taj chided the audience, “I can’t have fun with you if you won’t be nice.”

For the penultimate number of his set, Taj played “Take a Giant Step.” He turned the last number into a sing-along, with the audience repeating the chorus: “Everybody is somebody, nobody is nobody, the wealthy or the pauper.” Taj had the audience clapping along, too.

Still going strong at 77, Taj Mahal is a force to be reckoned with. He is a true musical master, a phenomenal songwriter, a gifted singer, and a virtuoso guitarist. He commands a stage, and he can work an audience like only an old pro. Anyone who gets to see Taj Mahal is a lucky, lucky person.

Here are some pictures of Taj Mahal performing at The Birchmere on July 25, 2019. All photos copyright and courtesy of Ari Strauss. 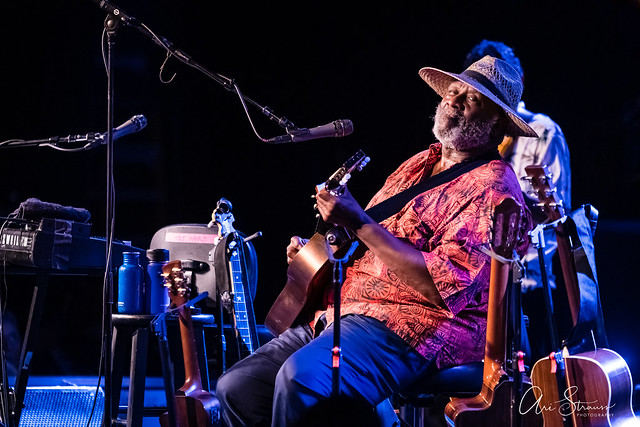 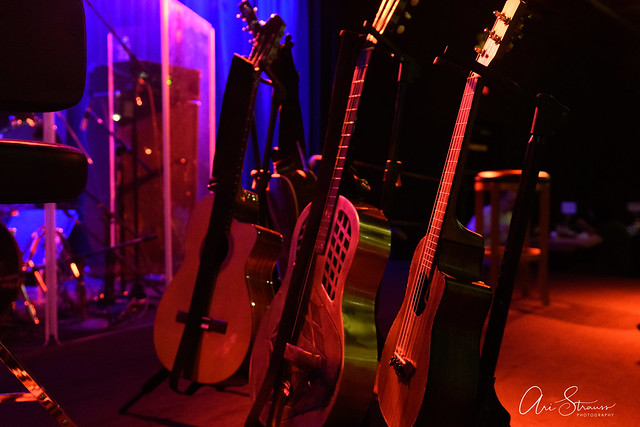 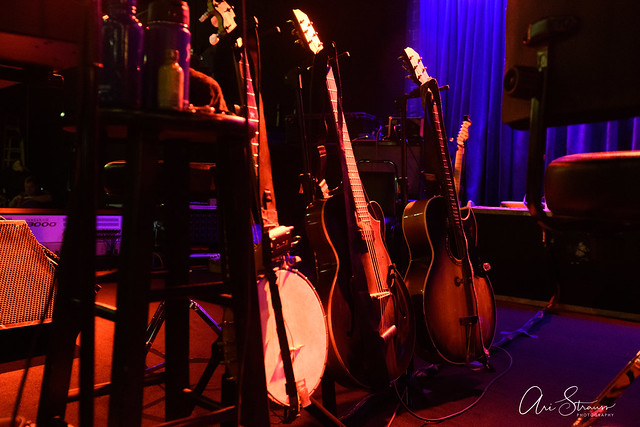 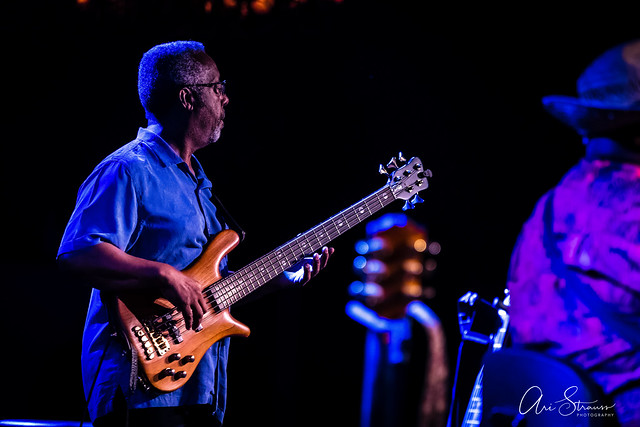 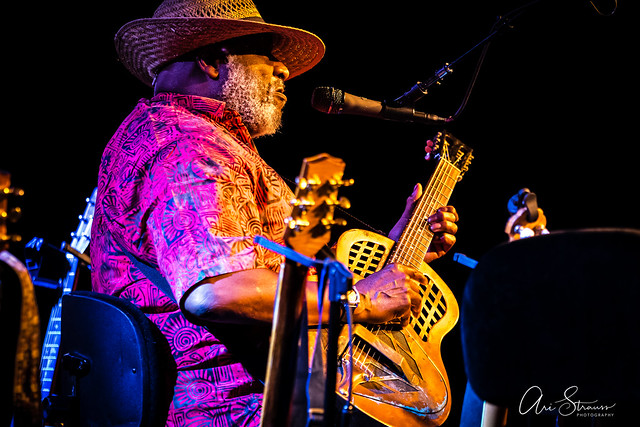 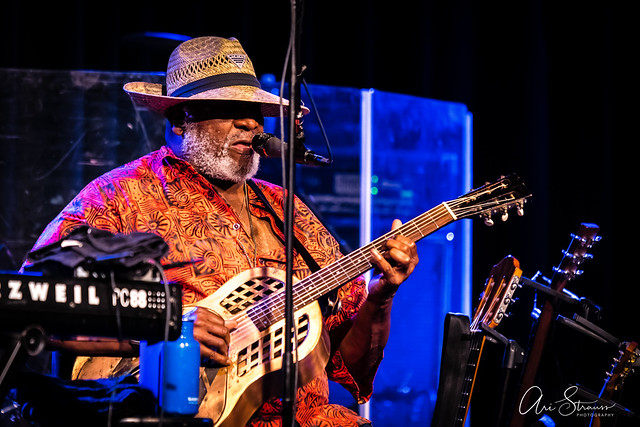 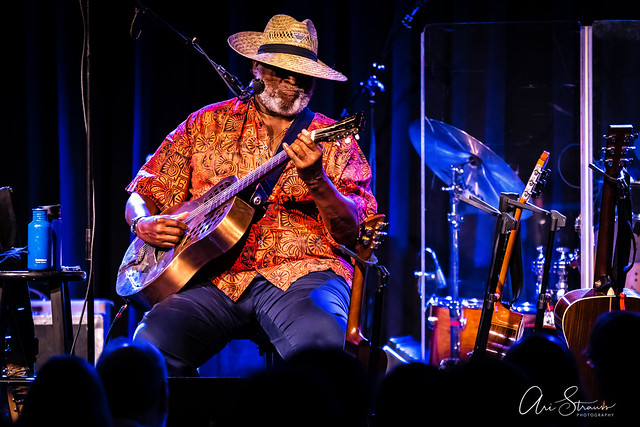 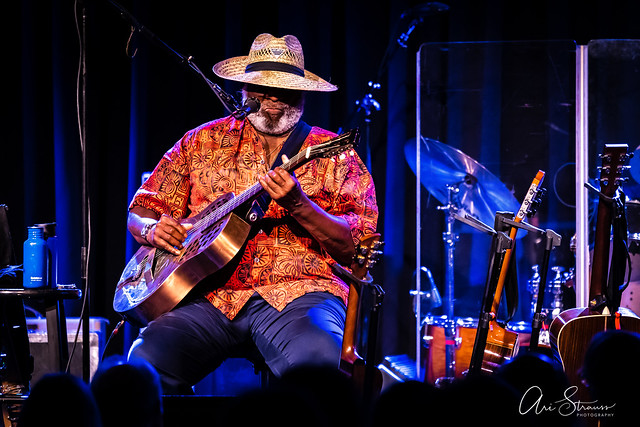 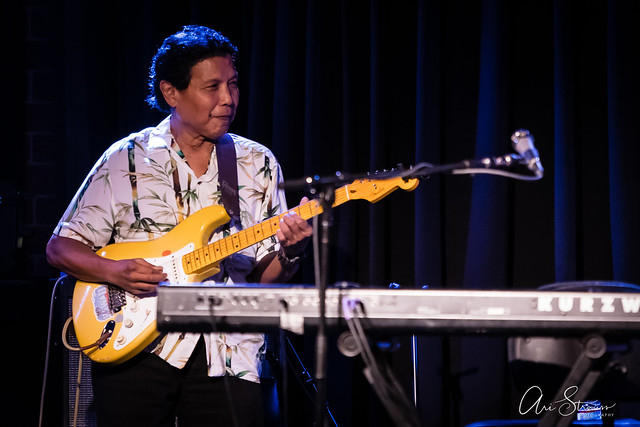 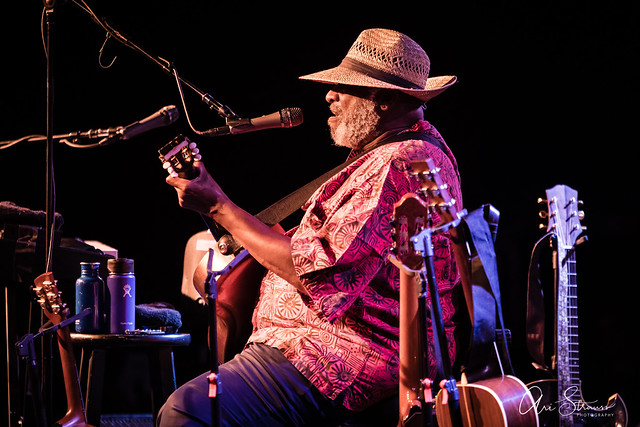 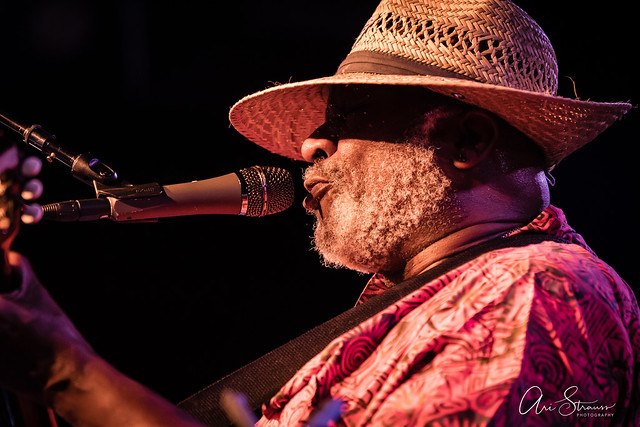 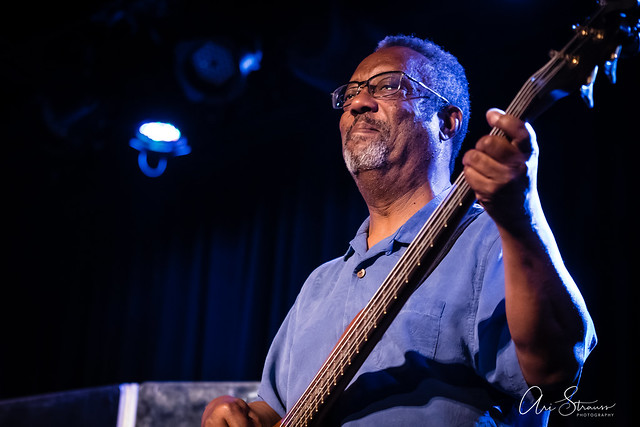 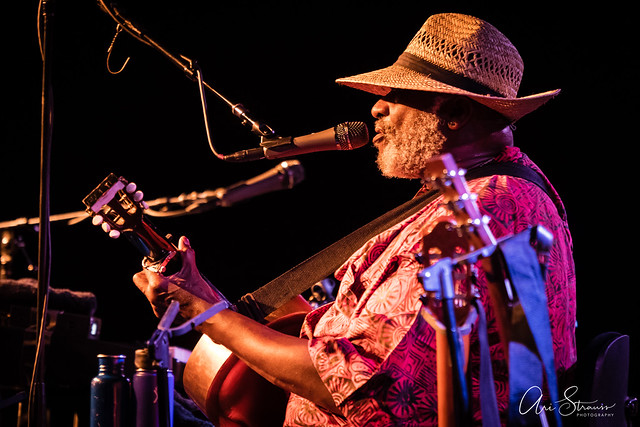 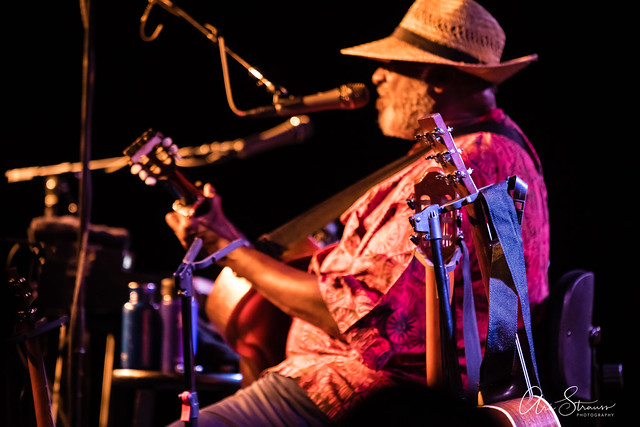 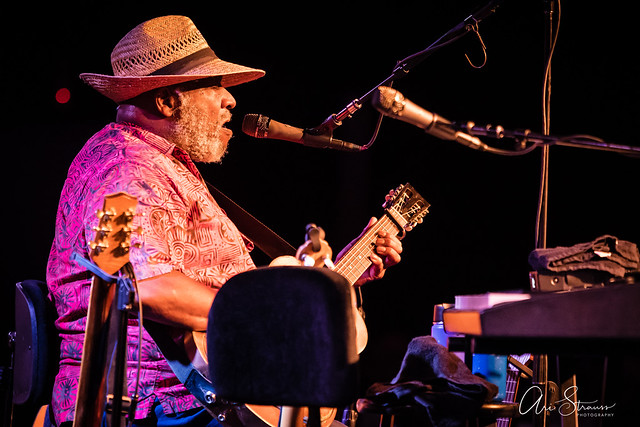 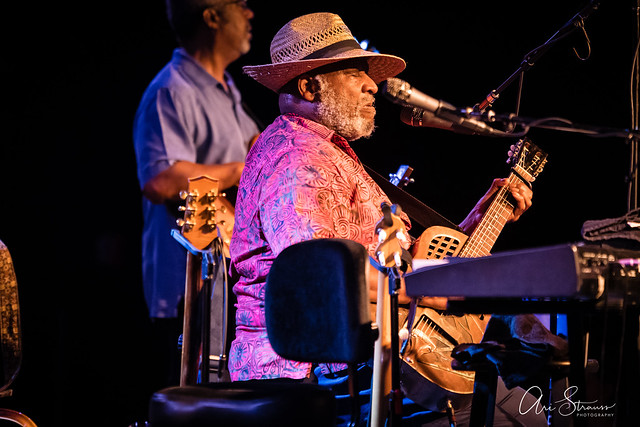 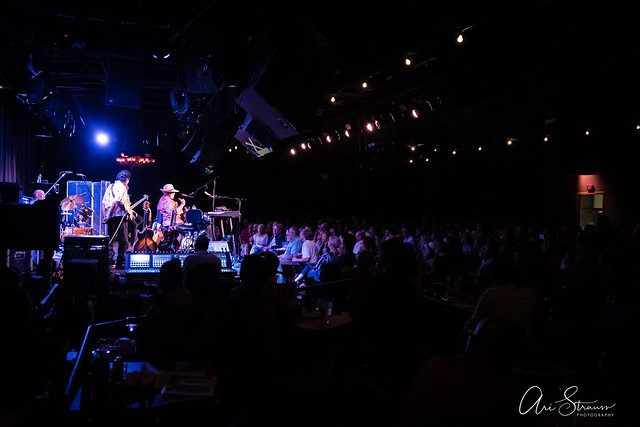 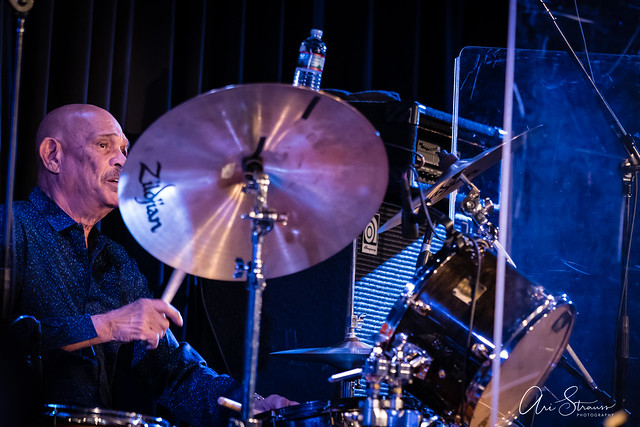 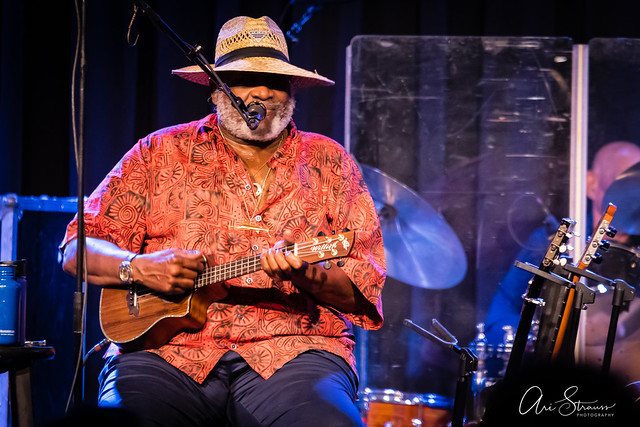