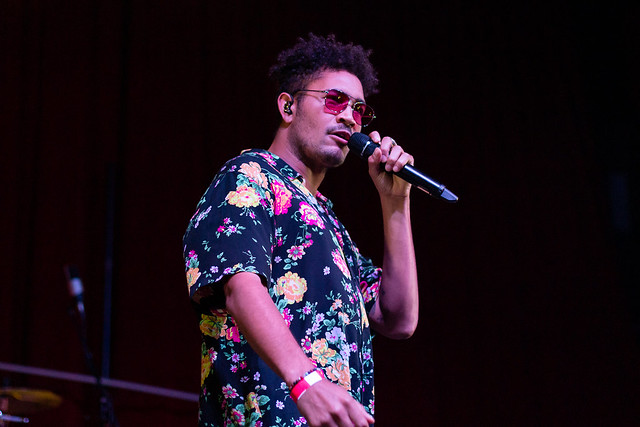 “How are you doing, general DC area?” Bryce Vine asked the crowd, a sea of positive shouts and cheers responding. Earlier that night, Bryce mentioned that a Silver Spring show being considered a DC tour stop was strange — and here he was performing at The Fillmore Silver Spring recently. The casual way that Bryce addressed the audience made the statement seem like a passing thought you would share with a friend. It was fitting for his laid back and easygoing persona characteristic of his Southern California origin.

If anyone in the audience wasn’t familiar with Bryce before the show on Aug. 1, they definitely knew him within a few minutes. The show began as Bryce walked on stage in a Hawaiian shirt, capris, and red-tinted sunglasses and performed “Love Is a Blessing” from his newly released debut album Carnival. Sang live, the lyrics felt like a welcoming address to the audience: “And every road that you gave me / The pave was the gift and I say / Hallelujah every day.” Bryce also talked about his success before performing 2014 EP Lazy Fair’s “My Holiday,” which was written when he was wishing for “nights like this” playing shows.

Not even six months ago, Bryce was touring the US playing in mostly sold out 500-capacity venues including Union Stage. And last week, he headlined at a packed 2000-capacity Fillmore Silver Spring with support from Ade (who referred to the crowd as not DC either but DMV, by the way). Backing him up in the band were DJ and trumpet player Lvcky Dave, drummer Al Cleveland III, and guitarist Alex Williams. Instrumental solos were dispersed throughout the show and were a sure highlight, happening at unexpected points and making the already danceable songs even more exciting. Bryce just wrapped up a short run of release shows for Carnival, and he will continue 2019 opening for Loud Luxury and Why Don’t We, then playing festivals.

Listen to “I’m Not Alright” by Loud Luxury and Bryce Vine on YouTube:

Bryce saved his two biggest hits for the second half of the show, playing “La La Land” and “Drew Barrymore” in succession. The two tracks don’t sound alike, but each’s popularity exemplifies the range of genres that he plays — the former is a traditional hip-hop/pop track and the latter leans into expressive, balladic pop. Bryce also played “Street Punks on a Freight Train” from 2016 EP Night Circus, a song that’s easy to picture being covered by any 2000s pop punk band.

I hoped Bryce would play my personal favorite off of Carnival, “San Junipero”, a nice reference to the Black Mirror episode, but he played every other non-interlude or outro track from the album except that one. Not hearing that song live was a mild disappointment, but waiting for a live recording of “San Junipero” to surface is more reason to continue keeping up with him.

Overall, the show didn’t have many pauses in between the music — Bryce kept his speeches concise. His newest single “I’m Not Alright,” a collaboration with Loud Luxury, was simply introduced, “Here’s a song I did with Loud Luxury.” But in a room full of fans who know his music, it was enough to hype up the crowd as the first few notes played. There was no gap before the encore, and the last few songs were preceded by Bryce saying “bye!” and pretending to walk off stage.

The concert actually concluded with the triumphant yet nostalgic ode to the ’90s, “Sour Patch Kids,” closing out with a final trumpet solo from Lvcky and a burst of multi-colored lights beaming from the stage.

If you ever find yourself in the mood to “waste your time in California” — as “La La Land” goes — while staying within the DMV, a Bryce Vine show is just the place.

Here are some pictures of Bryce Vine performing at The Fillmore Silver Spring on August 1, 2019. All photos copyright and courtesy of Angel Kim.