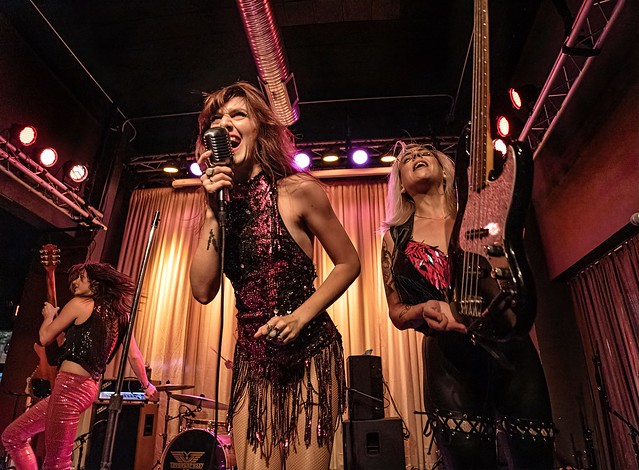 I think it’s fair to say I was a fan before I’d even seen them.  Through friends saying, “You have to see this band,” to amazing photos of their live shows, to (and most importantly) hearing that first song off their self-titled debut album, “Speed Queen,” I was hooked.  But I hadn’t witnessed the force that is Thunderpussy a recent show at the Metro Gallery in Baltimore.

Some bands you might be content to listen to on your turntable, but there are others that absolutely have to be witnessed to get the full effect.  Thunderpussy is like a multi-media experience.  Theatrical is a word that’s tossed around in articles, but vocalist Molly Sides, guitarist Whitney Petty, bassist Leah Julius, and drummer Lindsey Elias put their music where their mouth is and create some of the most fun rock and roll with a heavy mix of ’70s hard rock-inspired tunes sometimes reminiscent of The Runaways or early Suzi Quatro.

At the Metro Gallery on Aug. 11, the band started off the evening as Whitney appeared, picked up her guitar and a bow, and proceeded to set the tone as Leah and Lindsey took the stage to the opening lines of “Trust a Man.” And as Molly took the mic it was electric. And from there they turned the heat up, playing “Speed Queen” and “Never Know” as the band members played off each other, with high kicks and spins, and brought the music to the front of the stage — bringing the crowd closer.

Before the next song, Molly asked the crowd to turn to their neighbors and introduce themselves. “This song is about love and hope,” Molly said, asking the audience to stay in the moment without the distraction of cell phones or gadgets before launching into “The Cloud.”

Definitely one of the highlights included a spirited cover of Aerosmith’s “Sweet Emotion.” And I have to say that Molly Sides has to have one of the strongest voices around, cutting a straight line through the audience.

Thunderpussy is a band that has to be seen, putting on one of the best live shows I’ve seen this year. They continue their tour through the summer — catch them here.

Here are some photos of Thunderpussy performing at the Metro Gallery on Aug. 11, 2019. All photos copyright and courtesy of David LaMason.