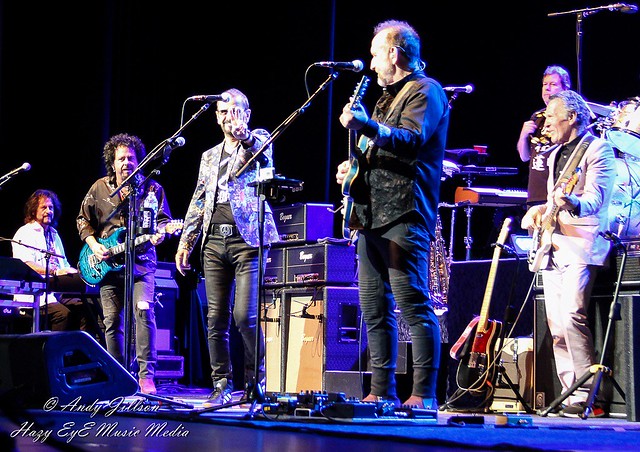 Ringo Starr and His All-Starr Band stopped to play a magical whirlwind of hits at Wolf Trap recenlty. I was once again fortunate enough to be there taking pictures and having my mind blown.

The former Beatles drummer and two-time Rock and Roll Hall of Fame inductee is out on the road with his All-Starr Band to celebrate the 30th anniversary of the concept.

Ringo Starr and His All-Starr Band took the stage promptly and played a memorable set of classics that included songs by The Beatles, Santana, Toto, Average White Band, Men At Work, and Plastic Ono Band.

The band played beautifully in Wolf Trap’s stunning open-air pavilion setting. The good vibes that night were overwhelming. The band played in front of a psychedelic background that was pleasing to the eye.

Ringo and company played a full two hours and didn’t waste a single second. Starr was goofy as always and took some time to joke with the audience and band members in between a couple songs.

For me, the best performances of the night were The Beatles songs “What Goes On,” “Yellow Submarine,” and “With A Little Help From My Friends.”

Other noteworthy songs Ringo Starr and His All-Starr Band performed included the Men At Work hits “Down Under,” “Who Can It Be Now,” and “Overkill”; and the Santana hits “Evil Ways,” “Black Magic Woman,” and “Oye Como Va.”

Listen to some of my favorite selections from The Beatles on YouTube!

“With A Little Help From My Friends”

This was a concert event well worth seeing. I have been obsessed with The Beatles since I was a teenager. Being in the presence of a living Beatle and all these other great musicians was a feeling that is difficult to describe.

The band appeared to be having a lot of fun and the audience members were up on their feet for most the show. Lots of ecstatic fans were swaying back and forth, and taking pictures and videos with their phones. There was drinking, smoking, dancing, singing, screaming, and a couple of drunken falls — a good time for all. Fun-filled and surreal! I’m still trying to wrap my mind around photographing Ringo Starr.

Here are some more photos of Ringo Starr and His All-Starr Band performing at Wolf Trap on Aug. 10, 2019. All images copyright and courtesy of Andy Jillson.