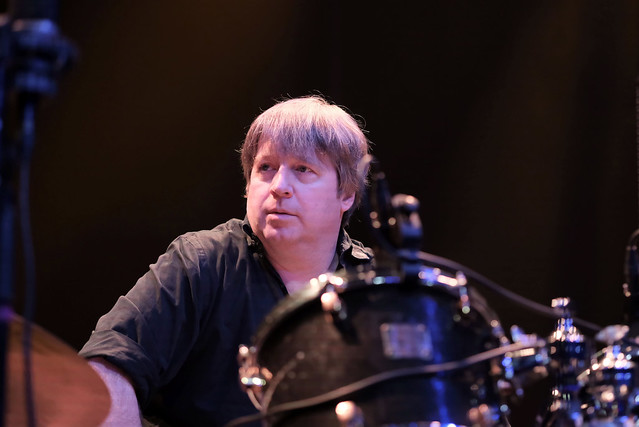 Prior to the panel discussion on Aug. 16, footage from Daydream Nation-era live shows in DC and Austin played, followed by the part of Charles Atlas’s documentary, Put Blood in the Music, featuring Sonic Youth. Footage was also shown of earlier concerts at the old 9:30 Club.

Steve discussed memories of performing in the former Soviet Union. While much bigger Western artists like Billy Joel and Paul McCartney had played there, Sonic Youth was one of the first indie bands to tour in Soviet-era Russia. The band’s concert in Moscow, he recalled, was something of a disaster. The band’s tour manage had to hold together the ramshackle drum kit that Steve was given for the show. All of the equipment was substandard or in poor condition.

Brendan Canty shared that, when Fugazi was approached about playing in the USSR, he asked Thurston Moore, the lead guitarist and, with his now ex-wife, Kim Gordon, one of the vocalists of Sonic Youth, whether they should go. Thurston told Brendan, “Absolutely not.”

While Fugazi rarely opened for other bands, they did open for Sonic Youth once in DC. As Brendan recalled, this took place at a former roller rink that is now a Harris Teeter.

Steve took questions from the audience. One attendee asked if Steve plans to write a memoir. Steve does not have any such plans, as he considers many of his stories to be exceedingly depressing. As an example, he told the audience about his experience working with legendary songwriter Townes Van Zandt. Steve had booked time in a studio to record with Townes, and when Townes showed up, he was in a wheelchair. He had fallen and broken his hip. Unfortunately, Townes was simply not up to recording, and Steve had to send him home. Only a few days later, Townes passed away.

Another 30 minutes of concert video footage aired after the panel. Steve met with fans to sign merch and take photos. I commented that Townes Van Zandt is quite different from what he is best known for — his work with Sonic Youth. Steve said, “I like all kinds of music.” Many of his other projects, such as playing on an early Cat Power album and with Sun Kil Moon, attend to his love of a broad range of musical genres.

Next up for Steve is a European tour with Mick Harvey, formerly of Nick Cave and The Bad Seeds and The Birthday Party. Keep tabs on Steve on his Facebook page.