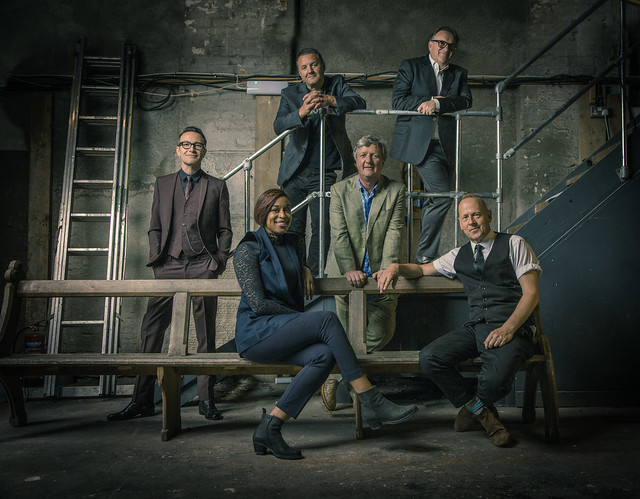 The pop masterminds of Squeeze sang the Difford and Tilbrook Songbook at The Kennedy Center recently, and a marvelous time was had by all at the sold-out show.

The Difford and Tilbrook Songbook Tour 2019, or in some quarters The Squeeze Songbook Tour 2019, delivered music craftsmen Chris Difford and Glenn Tilbrook and their bandmates to the concert hall at The John F. Kennedy Center for the Performing Arts on Aug. 17, as it has done across the United States this summer, for a thrilling account of the gentlemen’s greatest hits.

And hit these songs do with their irresistible hooks and clever wordplay. Squeeze paced through 22 of those songs, favoring selections from 1979’s Cool for Cats and 1981’s East Side Story — the band’s second and fourth albums respectively. Still, people at The Kennedy Center were on their feet early thanks to a one-two punch from Babylon and On, 1987’s terrific seventh Squeeze album, as the seven-piece band hit “Footprints” and especially “Hourglass” in the opening numbers.

Many people jumped to their feet for “Hourglass” and stayed there for the rest of the show, particularly as Chris and Glenn and company followed it with “Pulling Mussels (From the Shell),” perhaps to many the quintessential Squeeze song. Frontman Glenn Tilbrook reached deep and tapped into a well of emotion. Glenn’s formidable range fueled songs dramatic and humorous, as he furiously galloped nonstop on his guitar. The tireless singer was a joy to behold as he pounded a fist or a foot in time to the beat.

Well all of that excitement occurred only in the first four songs! Squeeze began to sprinkle in the aforementioned songs from East Side Story for a bit of love and tenderness — even if it goes awry in “Tempted,” which appeared two-thirds through the show. More my speed were the selections from the smashing Cool for Cats. Chris Difford belted out the title track in its familiar sing-song manner shortly after the halfway point of the show, and the entire audience again broke out into dancing.

Few songs highlight the capacity of Squeeze to employ words for effect as “Cool for Cats,” which visits a number of situations that collapse into calamity, including those of the song’s narrator as he attempts to navigate London nightlife as a single man. Folks partook in a similar joy in singing along with Chris, and the variations in pantomime by the crowd to illustrate the various interludes of the song were almost as endlessly entertaining as the number itself.

The current lineup of Squeeze include some players that have largely been there since Squeeze’s most recent reformation in 2007 — most notably drummer Simon Hanson and keyboardist Stephen Large. Simon appears as if born to play in Squeeze, and the gentleman punk delivered a furious kinetic energy to Squeeze staples like “Annie Get Your Gun,” “Goodbye Girl,” and “Take Me I’m Yours,” the latter of which began the three-song encore.

Dapper Stephen was light on the keys as he propelled breezy songs through the air into our ears — particularly numbers from Cradle to the Grave and The Knowledge, the last two Squeeze albums and records to which Stephen and Simon were key contributors. It may well be the Difford and Tilbrook Songbook, but Stephen added class and style to “Innonence in Paradise” and “Cradle to the Grave,” among other numbers.

Well, all of Squeeze proved again to be consummate professionals who put on a highly enjoyable show, and you’ll be missing out just as the narrator of “Black Coffee in Bed” yearns still for that love “now she’s gone.” Many Squeeze shows are sold out on this 2019 tour, but they remain in the United States for another month, appearing tonight, Aug. 22, at The Stone Pony in Asbury Park, New Jersey, and closing on Sept. 22 in Atlanta.

I’ve been thrilled to see them in DC for three out of the last four years, and I would love for this to be an annual event. Please keep the Squeeze songbook alive, Glenn and Chris, and we will see you again soon?