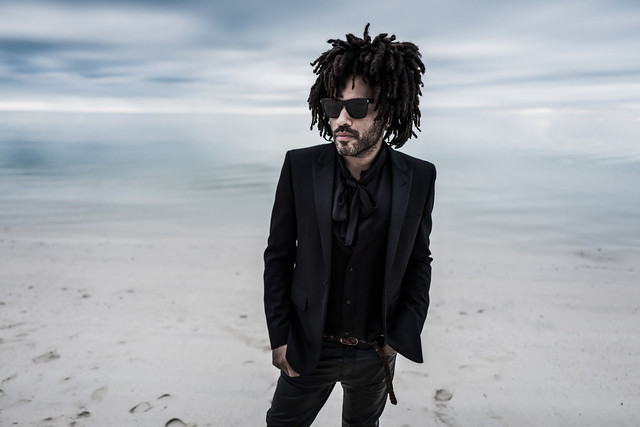 That set spanned his 30-year career from early tracks — as Lenny gyrated enthusiastically to “Freedom Train” and raised his audience up with “Mr. Cab Driver” and “Let Love Rule,” taken from his 1989 debut album of the same name — to current standout songs, such as “Low” and “Here to Love,” from his latest album, Raise Vibration.

The concert opened with his band playing a song from Raise Vibration, “We Can Get It All Together,” and Lenny suddenly appeared on a raised podium in the rear center of the stage formed by an arc of two tusk horns. He slung his guitar in hand, moving into “Fly Away” to rapturous applause.

Eventually, Lenny moved to the front of center stage to increased lighting and interaction with his band, practically blowing the roof off the pavilion. Folks were clearly enjoying the show as they picnicked, sang along, and danced to the sounds of Lenny singing one of his four Grammy Award-winning songs, “American Woman,” and leading into a wondrous cover of The Wailers’ “Get Up, Stand Up,” while parading around on stage with his horn section.

Throughout the entire concert, raise the vibration Lenny did with nearly everyone on their feet with the crowd pleaser of his Grammy-nominated hit of “Are you Gonna Go My Way.” He jumped off stage into the crowd, wading through the audience of thousands to “Let Love Rule” to finally closing out with “Again” from his self-titled 2000 album, Lenny. One thing he didn’t need to do was to raise the temperature on a hot August night! Lenny joked at one point “and I thought The Bahamas were warm!”

Lenny took some thoughtful moments between songs to address the audience in a loving and spiritual way. He discussed the current social and political climate challenges facing us today, acknowledging, “We have work to do to rebuild our love army — in a world that needs so much more love.”

“So regardless of what’s going on anywhere, we must represent ourselves,” Lenny added. “My mother used to say, don’t you worry about what anyone else is doing, you just do what you’re supposed to do.”

He continued reflections on the wisdom of his mother and also his grandmother with obvious affection:. “Those things that our grandmothers told us are so true and so right. We are blessed.”

Later, Lenny observed that he’s been away from his audiences a bit — and to rapturous applause, he committed to coming back and touring more often starting next year. This is one fan who can’t wait to see Mr. Kravitz live again! He a treasure and a master performer.

Lenny is at the start of his North American tour, and I can not recommend highly enough that you catch him in concert with his bandmates. Find tourdates for Lenny Kravitz on his website.

While enjoying a summer concert at Wolf Trap’s Filene Center, America’s only national park for the performing arts, is hard to top, seeing a show by Lenny Kravitz and his band just about anywhere will take you higher and raise your vibration!

We Can Get It All Together
Fly Away
Dig In
Bring It On
American Woman (The Guess Who cover)
Get Up, Stand Up (The Wailers cover)
Fields of Joy
Freedom Train
Who Really Are the Monsters?
Stillness of Heart
It Ain’t Over ‘Til It’s Over
Can’t Get You Off My Mind
Low
I Belong to You
Mr. Cab Driver
Bank Robber Man
Where Are We Runnin’?
Are You Gonna Go My Way
Love Revolution