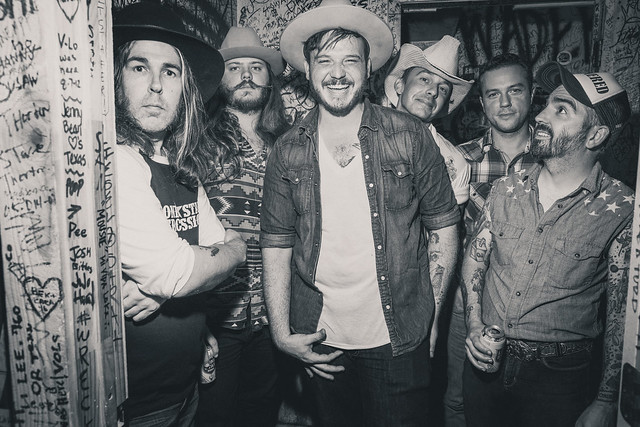 Dallas-based cowpunk band the Vandoliers headlined a festive evening of twangy performances that featured several musicians based in our local area. Max Jeffers of Baltimore rock group Western Star opened the show with a solo electric performance. I found myself sitting next to Max’s father, and we got to talking about his relationship with the Old 97s, who recorded their latest album at his ranch.

Matthew “Mule” McKinley performed in the third slot. Seated in a folding chair, he belted the blues while strumming his resonator guitar. Mule played one song in the style of John Prine, before covering Randy Newman’s “Short People.” Mule put his own spin on the number, changing “short” to “orange” and dedicating the song to the “man on Pennsylvania Avenue.”

Stream Forever by the Vandoliers on Spotify:

Continuing with material from their album Forever, which was released earlier this year on Bloodshot Records, the Vandoliers harkened to their Texas roots with “Tumbleweed.” Joshua co-wrote the next song, “Fallen Again,” with Rhett Miller of the Old 97s. John Pedigo co-wrote “Bluebonnet Highway,” as he did all of the songs on the band’s 2017 album, The Native.

Drawing again on The Native, the band played “Rolling Out,” followed by the seasonally appropriate “Endless Summer.” The ripping, energetic “Sixteen Years,” which tackles dedication, belongs to their latest set of songs, as does “The Grand Shoshone Rose,” one of their many songs reflecting the influence of Native American history and culture.

Moving on, the Vandoliers played the title cut of The Native, then the slower-paced ballad “Cigarettes in the Rain.” They took it back to their first album, Ameri-Kinda, playing “Wildflower,” and closed their set with “Bottom Dollar Boy.” Throughout their set, the Vandoliers appeared to be genuinely enjoying themselves, and Joshua commented a few times on how much fun was he having. The band let it all hang out, and by the time they finished playing, they were covered in sweat.

While the Vandoliers hail from Dallas, this concert experience reminded me of my time in Austin. There was an intimacy and sense of community at the show that reminded me of the gatherings of musicians, writers, and artists that I frequented in the summer of 2004.

The Pie Shop has a really nice, intimate atmosphere, and their menu is full of tasty treats. Relative to its size, the venue provides lots of space to sit down, which is always appreciated.