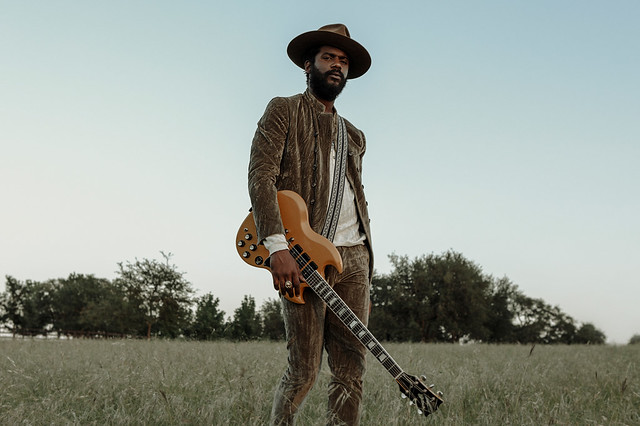 Genres are BS! The need to categorize was how blues became rhythm & blues and R&B was rebranded into rock ‘n’ roll — clever window dressing for marketers! Gary Clark Jr. would have none of it during a recent show at Merriweather Post Pavilion. The “guitar man” defied categorization as he traveled a continuum of American music that included blues, rock, and soul.

Fans, still hoarse from howling at the moon with the incomparable Nathaniel Rateliff & The Night Sweats, quickly got their second wind when Gary Clark Jr. began his set with “Bright Lights” on Aug. 25. *Warning: listening to this song at high levels will momentarily turn you into a badass.* The bluesy jaunt rocked on many levels as Gary’s gritty vocals gave way to a guitar solo that clawed at your soul.

The Austin, Texas native was a bad man on a six-string, but he was equally impressive behind the mic. Gary demonstrated his vocal range on “I Walk Alone,” “Feed the Babies,” and “Pearl Cadillac.” The third was a slow burn that recalled another guitar great with a distinct falsetto pitch. The song climbed to a crescendo as the drummer, in a Velvet Underground tee, brought the thunder and Gary ushered the lightning. It was a modern-day “Purple Rain.” “Pearl Cadillac” can be heard on Gary’s recently released album, This Land (2019)

Stream This Land by Gary Clark Jr. on Spotify:

Smoked filled the stage as Gary serenaded fans on “I Got My Eyes on You (Locked & Loaded).” At times the strobing lights made him appear two-dimensional. The slim silhouette, rocking a signature fedora, defiantly bellowed, “Who do you think you are?”

Gary traded what looked like an Epiphone Casino for a futuristic-looking flying V guitar on “You Saved Me.” Don’t quote me on the make, but do note that Gary is a guitar vandal regardless of what’s strapped over his shoulder. I mean that in the best possible way.

Every song on Gary’s setlist had a guitar solo that made fans close their eyes, wrinkle their brows, and euphorically rock. It was enough to make even the most demure in the crowd want to whip out their air guitar.

The Grammy-winning artist who is often compared to Eric Clapton, Stevie Ray Vaughan, and Jimi Hendrix ended the show with “Come Together.” The stinging cover of The Beatles song was a foot-stomping, head-nodding, hand-clapping send-off for fans that couldn’t get enough of Gary’s genre-bending anthems.

Legendary singer Etta James once said, “I wanna show that gospel, country, blues, rhythm and blues, jazz, rock ‘n’ roll are all just really one thing. Those are the American music and that is the American culture.” I’m unsure if she ever made that clear during her career, but Gary Clark Jr. certainly did on this night.

Other highlights from the show included Gary Clark Jr.’s performances of…

Gary Clark Jr. continues his tour next Wednesday (Sept. 4) in Morrison, Colorado, and through Oct. 12, when the tour wraps in his hometown, Austin. Make it a priority to visit his website and find a date near you.