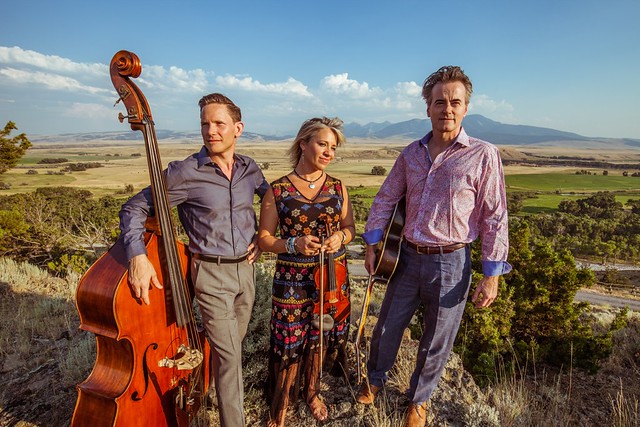 Earlier this year, The Hot Club of Cowtown released Crossing the Great Divide, a tribute to The Band, via Gold Strike. Next the band will release Wild Kingdom, a new studio album on Sept. 27! The hot jazz and Western swing trio have been touring relentlessly, and they visit City Winery for their next DC show on Thursday, Sept. 5.

Since 1998, the Western swing-gypsy jazz trio Hot Club of Cowtown has traveled the world bringing their own brand of magical musical chemistry to audiences far and wide. Along with Elana James, guitarist Whit Smith and bassist Jake Erwin are equal partners in this original marriage of gypsy-jazz-inspired by the music of Django Reinhardt — which accounts for the “Hot Club” portion of their name — with the hoedowns, traditional tunes, and Western swing-inspired music of Bob Wills and the Texas Playboys, represented in the “Cowtown” of their name.

“This music may be more prevalent now than fifteen years ago,” James said. “I don’t think as much of this was going on when we first got together — the seamless blending of Western swing tunes and hot jazz standards a la Django Reinhardt and Stephane Grapelli.”

While the merging of gypsy jazz with Western swing sounds natural when listening to Hot Club of Cowtown, in the beginning the fusion of the two styles seemed more unorthodox than it does now. “We just have always listened to old recordings and get inspired by that endless trove of astonishing performances. Mixing these genres together has always just been such a natural fit. Over the years other ‘hot club’ bands come and go but I guess generally we may be the most visible touring Western swing power trio out there.”

“As instrumentally and vocally tight as any band out there working in any genre today… three skilled musicians who can seemingly just tune up and play, something that’s becoming increasingly rare these days,” said American Songwriter of The Hot Club of Cowtown.