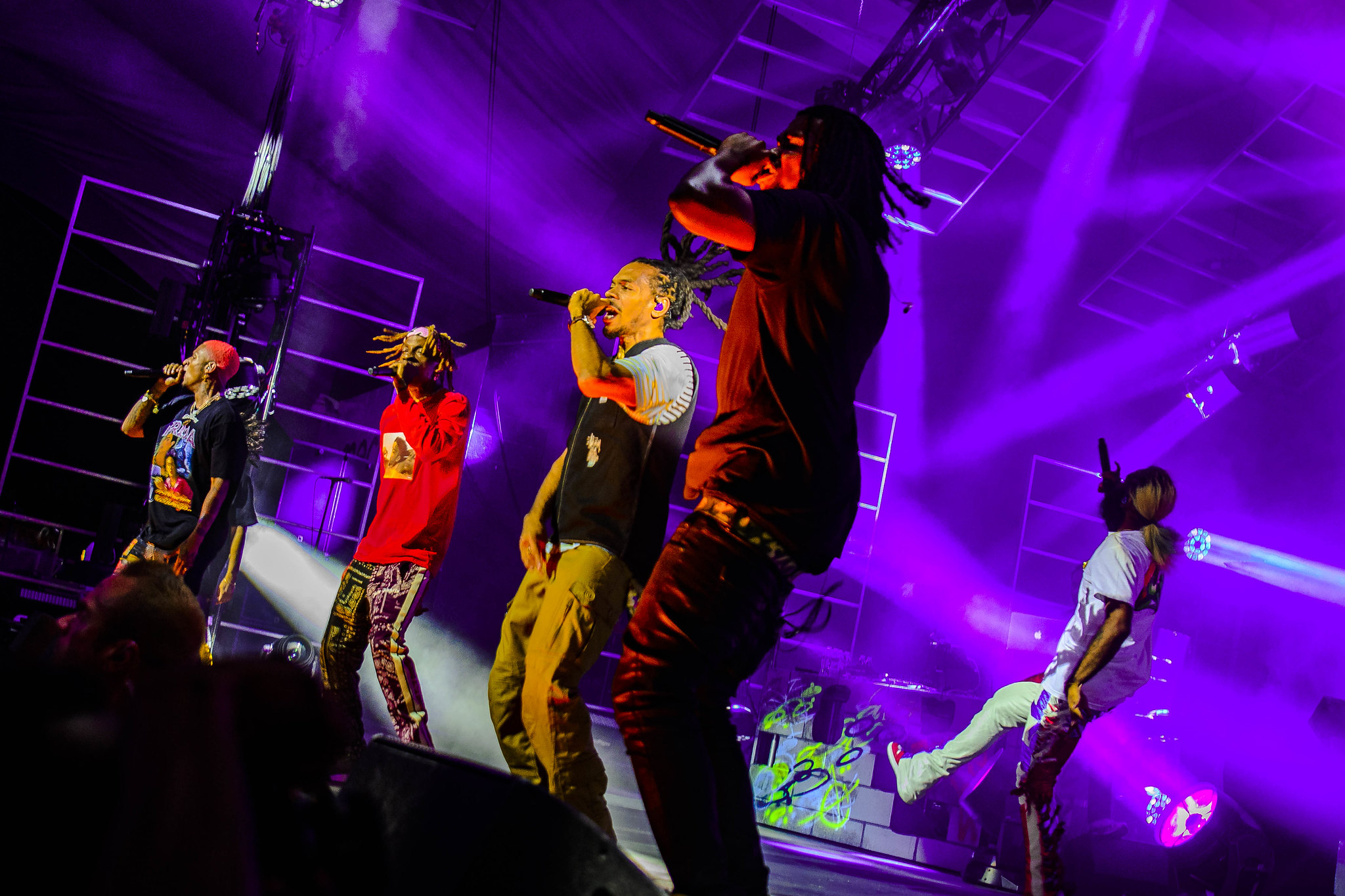 Beast Coasts’ Escape from New York Tour wrapped recently in Baltimore as tie-dye dipped fans plied into MECU Pavilion. The Beast Coast collective is a Voltron-style supergroup is made up by the members of three smaller groups all hailing from Flatbush Brooklyn: The Flatbush Zombies (Meechy Darko, Erick Arc Elliott & Jewice), The Underachievers (AK & Issa Gold), and Pro Era (Joey Bada$$, Nyck Caution, CJ Fly, Kirk Knight & Powers Pleasant). The 10-man army released their first project as a whole “Escape from New York” at the top of the summer and have been touring the country since.

On Aug. 25, CJ Fly opened the show performing songs from his last solo project “Flytrap,” such as “Harder,” “Idgaf,” and “Dope” before rolling into classics like “Tug-At-War” and “Ernee” from his 2013 debut album “Thee Way Eye See It.” CJ finished the set with a couple of unreleased songs including the title track from his upcoming album, “Rudeboy.”

Next up was Nyck Caution rocking shimmery Chris Jericho style outfit complete with the 24/7 Championship Belt. He, Jewice, and some of the crew have been wrestling for it all over the country. Caution climbed barricades and crowd surfed while performing songs like “Warning Signs,” “Off the Wall,” and “See You in Hell” before bringing out Kirk Knight to do “Dial Up” from their 2017 joint album “Nyck @ Knight.” While he was ending his set, Jewice ran on stage and hit Nyck with a ladder from behind knocking him down, from there a 24/7 title match broke out on stage. Caution was able to turn the tables and land a leg drop off the ladder to retain his title through then end of the tour.

Once they got the ladder off stage, Kirk Knight started out his set performing songs from his most recent album “It Is What It Is” such as “Duffle Bag” and Run it Back Freestyle, while showing off his singing chops performing “Downtime.” Kirk wrapped up his set hopping in the crowd to shake hands & talk to the people while his DJ played “Plain Jane,” A$AP Ferg’s triple platinum record produced by Kirk himself.

The Underachievers came out hard with records like “Stone Cold,” “Packs,” and “Deebo” from Lords of Flatbush 3, their latest installment in the series. They kept the mosh pit going with older bangers like “Chrysalis” and “Play That Way” before throwing it all the way back to their debut mixtape Indigoism with records like “Leopard Sheppard,” “Gold Soul Theory” and “The Mahdi.”

“Baltimore, DC area make some noise for yourselves man…you guys have great weed,” said Issa joking around with the crowd before the guys closed out their set with their first hit, the smokers anthem “Herb Shuttles.” We’ve been all over the country and let me tell you a lot places weed is TRASH. You ever been to Iowa? Garbage weed. You been to Nashville? Horrible weed, our DJ he’s from Nashville. That means he’s smoked trash weed his whole life until tour.”

Powers Pleasant did a quick DJ set, warming up the crowd one final time mixing in hard hitting tracks from his solo effort “Life is Beautiful” like “Please Forgive” along with turn up favorites like Sheck Wes’ “Mo Bamba” and XXXtentacion’s “Look at Me!”

Headlining the show, Joey Bada$$, Flatbush Zombies, and the whole Beast Coast took turns crushing the stage starting off with “Left Hand,” the first single off the Beast Coast album. Each member appearing from sides of the stage to do their verses one by one until the whole gang is finally onstage together by the end of the song.

Check out the video “Left Hand” by BEAST COAST on Youtube:

The stage clears as Joey Bada$$ took his first chance on stage performing “Paper Trails,” “Christ Conscious” and “No. 99” from his first album “B4.DA.$$” before turning it over to the Zombies. The stage goes black as the intro to “Headstone” begins and the crowd starts to chant along “Victory, Victory gold on my neck, Mr. T…” The lights come up as the guys jump off the rubble background as the song begins. All three acts traded off on stage, with the whole Coast coming together to perform track from the album like “Rubber Band,” “Distance,” and “Bones” and Zombies and Joey performing songs from different albums each time they came out. They eventually all stay onstage while hit songs like, “Palm Trees” and “Devastated” rang off.

The show wrapped up with everyone on stage as Joey performed the song that started it all, “Survival Tactics” featuring Capital Steez, the late founder of Pro Era who tragically passed away in 2014. The entire venue sang Steez’s verse word for word. Meech ended the show as they always do, “Can we spread our message, yes or no?” The crowd screeches “YES!” and he replies, “Open Your Fu***** Mind!” before they thanked everyone and left the stage. The audience chanted “BEAST COAST” over and over long after the guys had gone.

Listen to the album Escape From New York by BEAST COAST on Spotify:

Below are some more photos of Beast Coast at MECU Pavillion on Aug. 25, 2019. All photos copyright and courtesy of AJ Waugh (@Waufflez – wauffleznotwaffles.com).