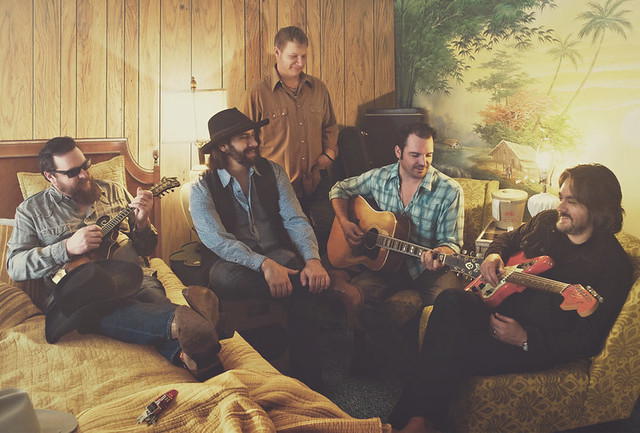 Willy Braun, rhythm guitarist and lead vocalist of Reckless Kelly, strummed his guitar to open the band’s show at the AMP by Strathmore recently. As he got going on “Thelma,” the story of a faded country star, his brother Cody joined on him on fiddle.

Since 1996, Willy and Cody have led the Austin alternative country-rock mainstay, pushing their strong sense of American roots music and family tradition in bold, exciting new directions. Their songs tell classic tales of love and loss and life on the road, catalog American tragedy, and plead the blues of everyday folk. With Reckless Kelly in the house at AMP on Sept. 14, the atmosphere was thick with dust from the red dirt of the Texas soil, a musical sandstorm that cuts straight to the heart.

With their third song of the night, Reckless Kelly paid tribute to Motown, name-checking several of its greats. Willy sang of a “sky full of shrapnel,” and pleaded, “take the hits, boys, take the hits.”

Declaring that “Misery loves company,” Willy sought someone to “Break My Heart Tonight.” In “Vancouver,” he chronicled the end of a relationship. In “Ragged as the Road,” he sang of “rollin’ faster than locomotive,” of being “Tougher than the edge of the Rockies, hotter than a smoking gun.”

Earlier this year, Reckless Kelly celebrated the 10th anniversary of the band’s seminal album Bulletproof with Bulletproof Live, a live recording of the album’s songs released via Yep Roc Records.

The Braun family tradition not only runs deep but spreads wide. Willy and Cody are third-generation musicians. Their grandfather, Mustie Braun, was a keyboardist, and he was a relative and neighbor of bandleader Lawrence Welk. Their father, Muzzie, performed with his brothers Gary and Billy. Willy and Cody’s brother Micky fronts the band Micky and the Motorcars; the two groups have appeared together. They like to throw one of Micky’s songs into their sets, and tonight it was “Nobody’s Girl.”

When it came to writing “The Champ,” Willy said, he didn’t he a lot of experience at being a champ. He did a lot of research on difference kinds of champs, and not just sports champs. His research led him to, of all things, the unique horseback battle tactics of the ancient Parthians. In a moment of light humor, Willy remarked that their tactics reminded him of a girlfriend he once dated.

After singing “Mirage,” Willy asked the audience to join him in act of imagination, to “transport this band and this whole place to Ireland” for “Seven Nights in Eire.” Robert Earl Keen, another major figure in Red Dirt music, co-wrote “God Forsaken Town,” about the tragedy that befell New Orleans in Katrina.

In “Passing Through,” Reckless Kelly combined a break-up story with a tale of life on the road. Next, they celebrated their “Moment in the Sun,” then changed gears to bemoan being “Lonely All the Time.” In the next-to-last-song of the set, they admitted that “It’s All Over.”

Reckless Kelly’s covers showed where their allegiances lie and put their unique stamp on the traditions they from. They played Son Volt’s “Windfall” (alt-country) and closed their set with Bob Seger’s “Get Out of Denver” (heartland rock) during their set. For their encore, they performed a twangy interpretation of the Richard Thompson folk ballad “’52 Vincent Black Lightning.”

The band brought it all home, and the audience to their feet, with a piece of folk-rock that remains, after five decades, perhaps the essential piece of American music: Bob Dylan’s “Like a Rolling Stone.”

Like those influences, you can’t keep a good band down, and Reckless Kelly will surely get you on your feet the next time you see them. Keep track of the band on its website.