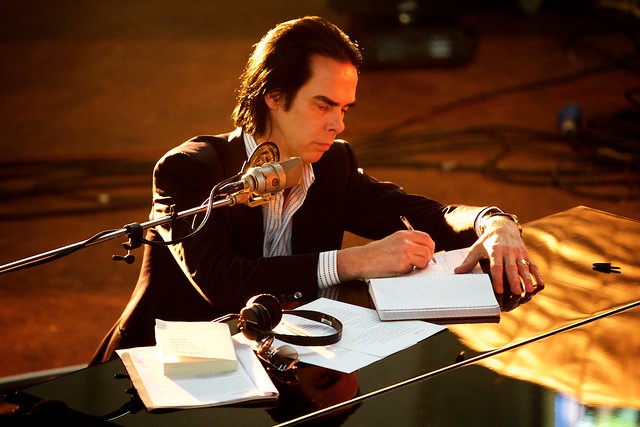 “Things really changed after the death of my child in that respect. I saw people in a different way. This is what happens. You think you know who you are, and then everything changes,” Nick Cave said at a sold-out show at the Lincoln Theatre recently.

It wasn’t an out of the blue acknowledgement from the gothic rock musician; rather, he was hosting an open forum of conversation and music where folks could ask him anything, and a member of the audience essentially asked him why he’s been compelled to connect with us in such a manner.

“We’re in it together,” Nick declared, in describing the renewed bond he feels with other people after the passing of his son Arthur after an accident in 2015.

The series of conversations, which Nick has conducted globally, springs from an online project, The Red Hand Files, where he’s answered about 16 questions over the last year. The conversations began as “an experiment to see what would happen,” Nick told the Lincoln Theatre, and “it’s become something to me very meaningful and a necessary part of my life.”

Over a lengthy evening on Sept. 20, Nick played 15 songs, often taking requests or following inspirations. To open the show, Nick sat at his piano and played “The Ship Song” from 1990’s The Good Son by Nick Cave and the Bad Seeds. He would eventually cover a lot of ground, including covers of “Avalanche” by Leonard Cohen and “Devil Town” by Daniel Johnston (a member of the audience said they saw Daniel in that very theatre on his last tour a few years ago).

In a question specifically grounded in DC, a member of the audience asked Nick about his relationship with Henry Rollins, who famously broke out of our city after heading Black Flag to become a Hollywood personality. “We were really good friends” at one time, Nick said. “We used to hang out.”

Members of their “weird little gang” would hang out and partake in drugs while Henry “did push-ups” because he didn’t do anything like that, Nick said. The two never discussed any artistic collaborations, Nick added. “We were great friends for a long time, but I haven’t seen him for a while. He’s a very beautiful guy.”

Reaching back to his very first band, Nick played “Shivers” after a discussion of the influence Rowland S. Howard had upon him. Calling the band, Boys Next Door, “a very average band,” Nick described how Rowland brought an incredible presence and a new level of songwriting to the band.

Discussing his songwriting inspirations, Nick confessed that he lived his life in such a way “as if God exists.” “But not from a moral point of view, but that there is something beyond myself that I’m reaching for all of the time, especially in my writing.” He also described the profound effect listening to Leonard Cohen had on him as a young lad, when he lived a carefree but unfulfilled life until he heard Cohen’s music, played to him in a shed by a friend, and it ignited a desire within him to be a musician.

Regarding his approach to songwriting, Nick said he approaches it with a sense of longing, and that longing is often grounded in an agnostic approach to the existence of God. “Atheism is very bad for the business of songwriting. It creates a weird glass ceiling,” Nick deadpanned in one of many lines that drew laughter from the crowd. Ultimately, however, Nick was not interested in the existence of God but rather the reach for something beyond oneself.

In response to questions about Murder Ballads, the lurid 1996 album by Nick Cave and the Bad Seeds, Nick explained he crafted the album specifically because he didn’t want to lose the song “O’Malley’s Bar,” which was recorded during the sessions for the previous album, Let Love In, but didn’t fit on it.

“We really loved that song but there was no space for it on Let Love In,” Nick said. So the band produced an entire record of murder ballads to give the song a home.

Further discussing Murder Ballads, Nick said he doesn’t relate to the characters in his songs or attempt to see their point of view — he simply wants to tell a good story. He also recalled approaching Warren Ellis to perform on Murder Ballads after being very impressed by a performance of his band the Dirty Three, momentarily having forgotten that Ellis previously contributed to Let Love In.

Stream Murder Ballads by Nick Cave and the Bad Seeds on Spotify:

Many people in the audience were there to celebrate their birthdays or wedding anniversaries, seizing the occasion to share a special moment with Nick Cave. Nick was very appreciative and patient with fervent admirers, often playing the straight man to crazed inquiries or odd declarations from the audience — which included such questions as “do you love me?” and “what are your favorite potatoes?”

The best moments were when Nick simply performed his most loved songs, including particularly “Jubilee Street” from 2013’s Push the Sky Away and “The Mercy Seat” from 1988’s Tender Prey early in the show, alone at his piano, “Into My Arms” from 1997’s The Boatman’s Call in the middle of the show, and “Brompton Oratory” (a song also from the Boatman’s Call in which he admitted his pride) and “Stagger Lee” from Murder Ballads toward the end of the show. Throughout it all, Nick was very composed and very much a gentleman, although he was fearless in allowing honest emotions shine through his stately composure. It was easy to see why so many people from so many walks of life love him so much.

However, Nick wasn’t entirely forthcoming in DC! He denied that a new Nick Cave and the Bad Seeds album was in the works, but then he revealed afterward online that the band would release Ghosteen, a 17th studio album, on Oct. 4 via their own Bad Seed Ltd. Preorder the album online, and make plans for a tour announcement undoubtedly to follow in the near future.

Catch Nick Cave in a show near you. Or participate in The Red Hand Files. Either way, you’ll feel closer to a very earnest earnest who will deeply appreciate your time and attention.