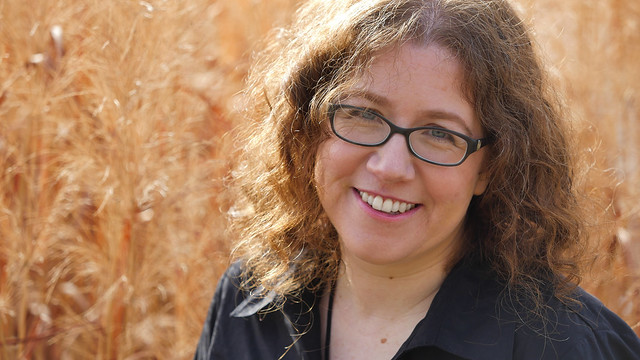 Sarah Pinsker’s Nebula and Sturgeon Award-winning short fiction has appeared in Asimov’s, F&SF, Uncanny, and Strange Horizons, as well as numerous other magazines, anthologies, year’s bests, podcasts, and translation markets. She is also a singer/songwriter who has toured nationally behind three albums on various independent labels. Her first literary collection, Sooner or Later Everything Falls into the Sea, was released in early 2019 by Small Beer Press.

A Song For a New Day is her first novel. Mark Engleson interviewed Sarah about the novel, her writing more broadly, her music, and the music industry. For more info about Sarah and her works, visit her website.

Mark Engleson: Could you discuss your trajectory as a musician and as a writer?

Sarah Pinsker: I’ve always done both, but the balance shifts. I stopped writing fiction in my twenties when I was making music. SONiA of disappear fear took me under her wing. She signed me to her label, produced my first album, took me on tour. I made three albums, two solo and one with my band. Then I started writing fiction again. My first pro story came out in 2012 I think, and I’ve sold about fifty since then, along with the collection and the novel. I have a fourth album done that I absolutely love and I hope I’ll be able to share soon. I’m not sure how to look at things in terms of trajectory. It’s more of a see-saw where fiction is holding music dangling up in the air right now.

ME: Who are you influences on the musical and on the literary side? I noticed in the book you mentioned Neil Young, and on one of your albums you covered Bruce Springsteen’s “I’m on Fire.”

SP: Bruce and Neil are both high on my music-side list, along with Patty Griffin, Toshi Reagon, Patty Larkin, Richard Shindell, Amy Ray, SONiA of disappear fear, Patti Smith. The commonality there is that they are all magnificent storytellers. Also a very high percentage of Patt(i/y)s.

On the literary side, early influences included Ursula Le Guin and Octavia Butler and Theodore Sturgeon and Kate Wilhelm and Gabriel Garcia Marquez and Karen Joy Fowler… so storytelling musicians and writers with musical prose.

SP: They’re both storytelling. It’s like how there are different poetic modes. You learn to discern what a story wants to be, and how much room it needs to be told. A story with multiple threads or complex backstory might need to be a novel. A story with a single image might actually want to be a song.

ME: While there are commonalities between music/songwriting and prose, the two skills aren’t entirely translatable. Some fantastic songwriters are disappointing prose writers, and very few have a strong talent for fiction. Who among songwriters do you admire the prose/fiction of?

SP: Patti Smith and Bruce Springsteen both write lyrical nonfiction. John Darnielle’s Wolf in White Van was really ambitious, and I’d read more of his fiction. Frank Portman’s King Dork was a great YA book. Charles de Lint is a wonderful musician and fiction writer. I’ve never gotten around to Josh Ritter’s novel, but he writes the kind of songs that make me think his fiction is probably good too. I read Rosanne Cash’s collection “Bodies of Water” ages ago and thought it was solid.

ME: A recent review at the Los Angeles Review of Books reminded me of the strong connections between popular music and fantastic/science-fiction literature. I’d like to get your thoughts on these connections.

SP: I hadn’t read that article, but I’ve read Jason Heller’s great book that’s referenced in the article, Strange Stars. SF and music have been wrapped up in each other forever. There are hundreds of great songs based on books. Fiction that does music well is a little rarer, but Elizabeth Hand and Tade Thompson and Lewis Shiner and LaShawn Wanak and Charles de Lint have all proven that it can be done. I love when it’s done well in either direction.

ME: A Song for a New Day takes up the perspectives of two characters at different ends of the music business. One is an artist, and one is essentially the future equivalent of an A&R agent. You do a really impressive job of balancing these two perspectives, and making them both sympathetic. What was it like, being an artist yourself, to write part of your story from a different side of the music business? Did this present any challenges to your own views about the industry?

SP: Luce, the musician, was definitely the easier character to write. Rosemary was trickier for a couple of reasons: not only that she is on the industry side of things, but also that she’s naïve and enthusiastic and totally accepting of a life that to me feels horrific. The challenge is in not letting my own horror at that idea come through, and instead grounding her in the knowledge that she believes this is the way things are and have to be. From her perspective, the industry side is just another job, and a good job for a music fan.

ME: Your novel celebrates how music stands at the center of vibrant communities. How do you view the relationship between music and community?

SP: It’s a symbiotic relationship. Part of the fun is in making friends with other bands, doing shows with each other, growing with each other and challenging each other, cross-pollinating audiences, making those audience members feel like they’re part of something, too.

SP: This might take more room than I’ve got here…in some ways it’s easier than ever for bands to get their music out, with Bandcamp and Youtube, etc. Easier to make connections with bands in other towns, maybe share shows. But it’s also harder to make money in a lot of ways. Streaming services pay fractions of pennies. People don’t buy as much music on physical media. Small clubs and DIY spaces get bought out and replaced. The world is larger and smaller all at once.

Every time I see an article about being another step closer to holograms of famous people doing shows, I get nervous. I do think people would happily pay to go see Prince or David Bowie play live again under those circumstances. Maybe those aren’t the same people who go see local bands play anyway, but is the Bowie hologram going to take a live band on tour as openers? I doubt it…

I get frustrated that people always say they don’t like live shows because they’re thinking about giant stadiums or festivals, when they might dig a small local show.

ME: Would you like to recommend some writers and/or musicians to readers?

SP: How much room do you have??? I always get petrified by this question because I don’t want to leave anyone out. Hmm. I’ve got books by Sam Miller and Annalee Newitz and Tade Thompson and A.C. Wise sitting by my bed right now. I recently blurbed Nino Cipri’s upcoming collection, which is amazing. I’ve only had a chance to give Brittany Howard’s new album one listen but I’m digging it. I haven’t heard the new album of women singing Tom Waits yet, but that’s high on my list. My friends Manners Manners are awesome. I’d better stop there. So much good stuff, so little time.