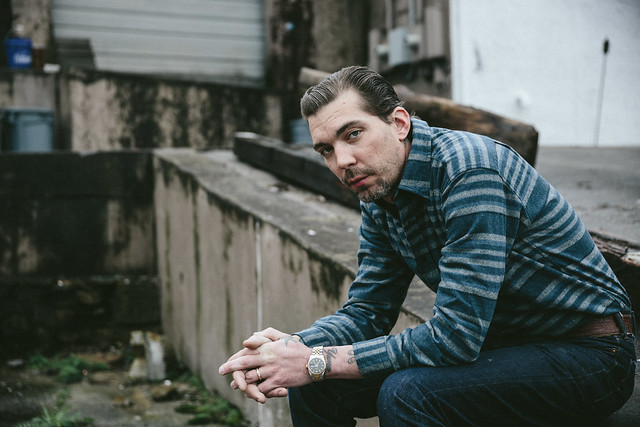 “How the fuck y’all doin’?” the inimitable Justin Townes Earle boisterously addressed the audience at The Birchmere at the beginning of his set recently. A fan shouted, “You look better!” at Justin, who sported a goatee and a new, shorter haircut. Sassily, Justin replied, “I know that, baby.”

On Oct. 2, Justin opened with his set with the title cut off his latest album, The Saint of Lost Causes, released in May via New West Records. Declaring “Ain’t got nothin’ to do with deserve,” the song took a grim view of life’s hardships. It included social comments in both symbolic language, such as “Between a wolf and a shepherd / Who do you think has killed more sheep?” and more directly, with the lines, “Be sure you lock up tight at night / ‘Cause you know poor folks ain’t got nothing to steal.”

Rather than political songs, Justin told the audience, “I write social songs.” He described politicians as aliens, and suggested that believing you could run the United States requires a certain degree of megalomania.

“Ahi Esta Mi Niña” clearly had a social message. It told the story of a man just released from Clinton Correctional Facility, located in the northeast corner of New York state. When he gets off the bus, the man encounters his 16-year-old daughter, who he only knows from pictures.

A former resident of New York City, Justin wrote “One More Night in Brooklyn” about “getting the fuck out of Brooklyn.” He moved to New York to live in “New York, not Brooklyn.” Justin recounted memories of north Jersey, as well, from his time in and around the Big Apple.

A talented songwriter, Justin left room for ambiguity in his songs. “Frightened of the Sound,” he said, could be about politics, creed, or sexual orientation, or it could just be about the weather. The title of “Flint City Shake It,” he declared, “speaks for itself.” He compared the title to “wearing a t-shirt that says, ‘I Like Beer.’” Someone from the audience interjected a snide comment, prompting Justin to explain, “I am deaf to certain tones, and you have a high-pitched voice.”

Stream The Saint of Lost Causes by Justin Townes Earle on Spotify:

My mother, who grew up in the ’50s, picked up on Justin’s retro style. There was a lot of rockabilly in Justin’s Americana. The songs mixed both acoustic and electric guitar with pedal steel, and on some of the songs, stand-up as opposed to electric bass.

Introducing “Move Over Mama,” Justin mentioned that he and his band have been on the road for a few weeks. On “Am I That Lonely?” Justin’s bass player wailed on “the closest thing I’ll ever have to a bass solo.” After this demonstration, Justin asked rhetorically, “Have you ever seen such a funky cracker from Ohio?”

After “Am I That Lonley?” Justin played “They Killed John Henry” solo. His steel guitar player returned to accompany him on “My Mama’s Eyes,” then the rest of the band came back to the stage.

Rounding out his set with “Talking to Myself” and “Ain’t Got No Money,” Justin and the band left the stage to a standing ovation. For the encore, the band returned first, then a shirtless Justin. Fleetwood Mac’s “Dreams” came as a bit of a surprise, but Justin finished the evening with “Movin’ On,” which was right on point.