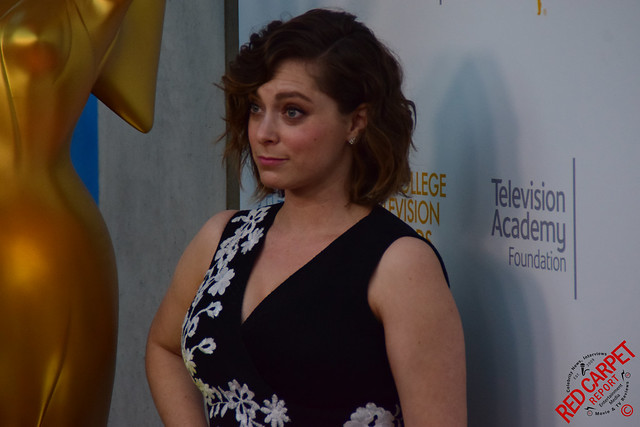 Rachel Bloom at the 37th College Television Awards on May 25, 2016. (Photo by Red Carpet Report)

Four months on and visibly pregnant, Rachel Bloom brought the What Am I Going to Do With My Life Now? Tour to the Anthem on recently.

The star of the recently concluded comedy Crazy Ex-Girlfriend joked about her pregnancy several times throughout the evening. She quipped that one day she had found “curdled milk” on her breasts, and she suggested that her husband will be jealous of her baby’s feeding. She declined to do her song “Heavy Boobs,” as it would be too painful. She also apologized in advance if she had to take a restroom break, and said that her opener would cover for her if necessary. (Later in the set, she told the audience that she didn’t have to pee anymore, and was somewhat afraid of why that was.)

Rachel’s set included both numbers from her show as well as expressing her desire to be a “hip-hop star,” Rachel rapped her way through her first song, which wasn’t from the TV show. Turning to tried and true material, she sang “Sex with a Stranger,” from the first season of the series. She pleaded to her potential lover, “Don’t be a murderer!” and “Don’t harvest my kidney.”

“Sexy French Depression,” in the style of a French torch song, comes from the first season of the show, too. In the series, she sang it when the object of her character Rebecca’s obsession moves in with his girlfriend. The segment was shot in black and white to create an “artsy” mood, like French cinema.

Returning to the subject of pregnancy, Rachel performed a song about circumcision, which explored the issue of male versus female circumcision. She told the audience that she’s expecting a girl, so circumcision isn’t a live issue for her.

The creators of Crazy Ex-Girlfriend have stated that, while there are romantic relationships in Crazy Ex-Girlfriend, it’s not really a romantic comedy. Rather, it’s a dramedy about mental health and recovery. The series has received praise for its compassionate exploration of sensitive issues like suicide (attempts). “A Diagnosis,” from the sixth episode of season three, “Josh Is Irrelevant,” was used in the series for Rachel to discuss Rebecca’s desire to get new insight into her personality and behavior. In the series, Rebecca is diagnosed with Borderline Personality Disorder.

The next thing to come up the concert was the internet viral video “Cake Farts,” the subject of a very strange, very funny song imagining how the video came to exist. “The Mathematics of Love Triangles,” another song from the TV series, juxtaposes Rebecca’s romantic situation with geometry.

Rachel’s opening act joined her onstage to serenade her with “The Miracle of Birth.” She rounded out her set with “Jazz Fever,” finishing with “You’ve Ruined Everything.” It was a great night for fans of the show.