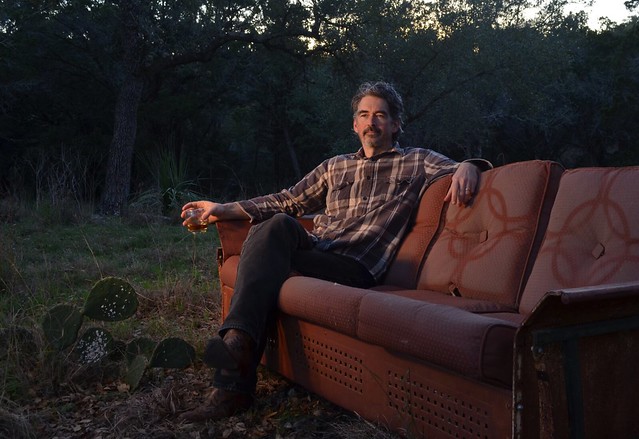 Austin singer-songwriter Slaid Cleaves played a delightful show to a packed house at Hill Country Live recently. He opened with “Horseshoe Lounge,” with his accompanist, Chojo Jacques, adding fiddle to the mix. Slaid told the crowd that he was born in DC, and that this was his fourth October show at Hill Country in DC.

On Oct. 14, Slaid followed “Horseshoe Lounge” with “Drinkin’ Days,” then introduced “Hickory, Walnut, and Pine,” which saw Chojo switch to the mandolin. A bluegrass group recently recorded the tune, and he expects “tens of dollars” in royalties.

The 1940 film Meet John Doe inspired “Drunken Barber’s Hand.” In the film, a hobo swats away the newspaper, saying, “I don’t need to read the paper. I know the world’s been shaved by a drunker barber.” The film is about what happens when newspapers are more focused on sales than reporting the news.

Throughout the concert, Slaid honored requests. He uses his website to allow fans to request songs. For Kim, Slaid played “Broke Down,” a song he wrote with fellow Maine native Rod Picott. Slaid described the song as his “hit,” which propelled him “from total obscurity to relative obscurity.”

Stream Ghost on the Car Radio by Slaid Cleaves on Spotify:

Slaid met Rod on the school bus when he was 8 years old. In high school, the two had a garage band called the Magic Rats. The pair also co-wrote “Welding Burns,” about Rod’s father, Dick, who worked at the navy yards, and whose garage they would practice in. They wrote “Black T-Shirt” about the tough types on the bus. Recalling his youth, Slaid talked about how parties took place in the gravel pit and his memories of drone boots, which were banned at school because they left black scuff marks on the floor. He remembered one guy who dropped out in junior that he saw 20 years later working the Ferris Wheel at the local fair.

After “Black T-Shirt,” Slaid covered David Olney’s song “Millionaire.” He complimented the “wonderful audience” for being “nice and quiet,” then introduced “Texas Love Song.” The song began as an effort to overcome writer’s block by seeing how many rhymes he could come up with for “Texas.” Calling Texas pride as “goofily large,” Slaid brought up graffiti in Brooklyn that reads “I hate this part of Texas.” With Chojo back on the fiddle, the pair got the audience clapping along on the jaunty number.

Slaid next played a pair of requests, first dedicating “Primer Gray” to Thomas, who drive 500 miles for the show. When he found out that Thomas had driven from Boston, Slaid asked, “Didn’t we just play Boston?” For Hillary, he played “Last of the V8s,” which was inspired by the movie Mad Max.

With “Cry,” from the album Everything You Love Will Be Taken Away, Slaid said he was “going for the feel good hit of the summer.” The song cribs the line “Every bond is a bond of a sorrow” from James Joyce.

A fan named Dan had asked that Slaid pick one of three songs to play at the show, none of which are songs that Slaid regularly plays. Committing to relearn one of the songs, Slaid chose “Voice of Midnight.”

The folk song “Breakfast in Hell” is based on a true story. Slaid was told that story by fellow musician Gurf Morlix on the very spot where it happened. He got the crowd to make the sounds of a chain gang, “Hoo, hah.”

Slaid played a song about Texas country musician Don Walser, then had Chojo do a fiddle number while he rested his voice. He played “So Good to Me” for the couple with the most recent anniversary, and rounded out his set with “One Good Year.” For his encore, he selected “Lydia.” As they played, Slaid and Chojo left the stage, walking through the audience.