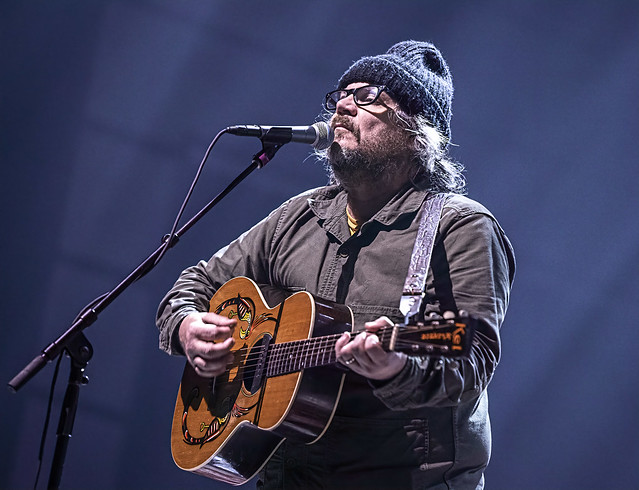 Wilco is one of those bands that continue to grow and evolve — which is part of why they continue to be an inspiration to other musicians and more importantly their fans. Although each album stands alone as a document of that particular point in time — they aren’t trying to redo what’s already been done — the great thing about watching a Wilco show is that you have that chance to hear some of those older songs alongside newer ones.

And even then things are never the same, as the performance like the band can evolve, too. I remember the first time I saw Wilco. It was back in 1997 or 1998 at a wedding hall, and each time since then it’s been different but each has been an amazing performance.

With Wilco’s newly released Ode to Joy, their 11th studio album, they follow that evolution, pulling on the strengths of not only songwriter Jeff Tweedy, but of Nels Cline (guitar), Glenn Kotche (drums), John Stirratt (bass/vocals), Pat Sansone (banjo/guitar/keys/vocals), and Mikael Jorgensen (keyboards/piano). Each member an accomplished master of their craft. Openers like “Bright Leaves” and “Before Us” slowly open an album that has quite a few surprises.

Experiments with sound make the album feel more open and intimate. You can hear the creaks of chairs on the beginning of “Hold Me Anyway” and it feels like you’re there in the same room. But that’s not to say it doesn’t fill your headphones. A good example being “Quiet Amplifier,” which layers one thing on another until before you know it there’s a burst of sound and you’re not quite sure how it happened but you’re glad it did. So, with that in mind, I was really eager to see how these songs would translate to a live setting.

Stream Ode to Joy by Wilco on Spotify:

Wilco took the stage and went on to play nearly 30 songs for close to three hours on Oct. 15 for a totally sold-out crowd at The Anthem. It was a seated show, but after a while those seats (although comfortable) became part of the scenery as for the songs like “Box Full of Letters” and “I’m the Man Who Loves You” had fans standing or leaving their seats to dance in the aisles.

After opening with the first two tracks on the new album — “Bright Leaves” and “Before Us” — which they’ve been opening shows with lately they went into “I Am Trying to Break Your Heart” and “War on War” from Yankee Hotel Foxtrot.

Before introducing the next song, Jeff joked, “Here’s another sad song from our album, Ode to Joy…  It’s not so sad if you don’t listen to the lyrics.” Of course it was one of my favorites from the new album, “One and a Half Stars.”

After a blistering (and I’m pretty sure blisters were involved) solo by Nels during “Handshake Drugs” everyone was clearly blown away — Jeff even joking that it was just the way he told him to play it. And the guitar work by Jeff, Nels, and Pat on “Impossible Germany” was perfect.

There are so many elements that Wilco pull together to make a great show. From the controlled frenzy of Glenn’s drumming on “Via Chicago” to Pat’s spot-on solo on “Box Full of Letters” even to Jeff’s dry wit as he played off the crowd. As a guy in the audience yelled out, Jeff replied, “The gentleman has advised us to keep on rocking. We appreciate the lobbying.”

Wilco went on to play one favorite after another, and time seemed to stand still. After an amazing “Misunderstood,” the band performed perennial favorites “California Stars,” “Red Eyed and Blue / I Got You (End of the Century,” and “Outtasite (Outta Mind).”

Bright Leaves
Before Us
I Am Trying to Break Your Heart
War on War
One and a Half Stars
If I Ever Was a Child
Handshake Drugs
At Least That’s What You Said
Hummingbird
White Wooden Cross
Via Chicago
Bull Black Nova
Random Name Generator
Reservations
We Were Lucky
Love Is Everywhere (Beware)
Impossible Germany
Forget the Flowers
Box Full of Letters
Everyone Hides
Jesus, Etc.
Theologians
I’m the Man Who Loves You
Hold Me Anyway
Misunderstood

Encore:
California Stars
Red-Eyed and Blue / I Got You (At the End of the Century)
Outtasite (Outta Mind)

Wilco are currently on their World Tour more dates can be found here. It’s definitely one not to miss!

Here are more photos of Wilco performing at The Anthem on Oct. 15, 2019. All photos copyright and courtesy of David LaMason.