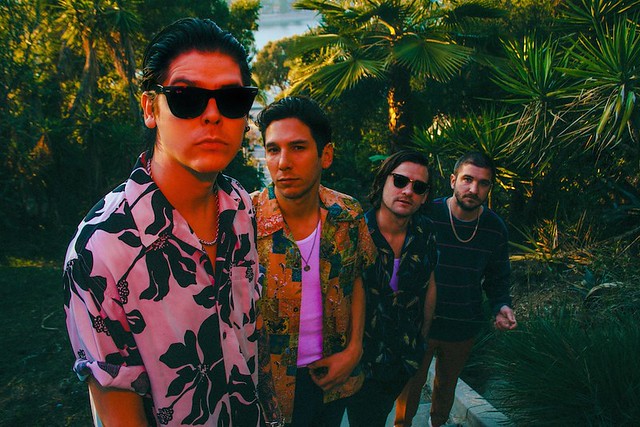 “This urgency, it just won’t quit”

Plague Vendor’s recent show at DC9 was an early one, and as I raced to catch my yellow line train I could feel a mounting sense of urgency, driven by the seeping, intoxicating thrill of seeing two Los Angeles-based bands who have earned a reputation for putting on wildly entertaining live shows.

As I ran toward the club on Oct. 11, I couldn’t believe my luck that I had made it in time to catch the first act of the night, a NYC-based, riff-heavy rock trio called Warpark. I hastily showed the bouncer my ID, making sure to give him a hearty fist bump as a token of my gratitude, and jumped three stairs at a time to get to the doors…. only to find them closed. Apparently, the dudes in Warpark had stolen a bottle of tequila from Plague Vendor and got kicked off the tour. Although I wouldn’t allow my exhilaration to be doused by ill-gotten tequila, it was quite the anti-climatic start to the evening.

About an hour, and a few Natty Bohs, later, No Parents kicked off their set. Sporting frosted tips, rambling oddly about Limp Bizkit, and encouraging us to the throw up horns, lead man Zoe trolled the audience, sewing confusion into a crowd mostly comprised of first time listeners. To further obfuscate, the band began their set with an uncharacteristically pop-sensible tune, “Middleground.” The uninitiated among us were confused, but those of us who had heard No Parents snuck knowing smiles at one another, steeling ourselves against what was soon to come.

Sure enough, when they exploded into their second song, “History”, the early ’00s pop punk illusion was completely destroyed, and the set began in earnest. While the band’s thematic content and stage antics harken back to the irreverent snottiness characteristic of your run-of-the-mill 90s skate punk band, musically they paint with a much wider brush. From the punk-fueled wall of sound featured in “You Got Snaked” to gang chant harmonies on “Die Hippie Die,” and clean, melody-driven guitar runs in “The Punisher,” No Parents used this opportunity to show off their eclectic musical chops. And based on the frenetic energy oozing from each individual band member, it would appear they’ve got a lot of gas left in the tank.

After a very well-received showing from No Parents, the audience was growing increasingly excited for the main event; indeed, most people had come to see Plague Vendor, Epitaph Records’ latest golden child, grace the stage. As soon as the lights dimmed, and we got our first glimpse of singer Brandon Blaine decked out in a fluorescent yellow Black Cat shirt and matching glow-in-the-dark kicks, something changed. There was a collective, almost-religious hush and, for the briefest of moments, the room was quiet enough to hear a pin drop.

Then, Plague Vendor ripped into their first tune of the night, “New Comedown”, which was the band’s leading single off the 2019 record By Night. By the time Plague Vendor were halfway into the first verse of their second song — a masterpiece rooted in a rock steady rhythm section and surf-inspired guitar runs called “Black Sap Scriptures” — Brandon’s Dracula-esque pull on the audience was already complete. So early in the set! People who had just heard these lyrics seconds ago were singing along as if their life desperately depended on it, while young dancers were lured on stage to become part of the show.

Stream By Night by Plague Vendor on Spotify:

Indeed, at one point halfway through the set, I found myself climbing onto one of the stage monitors, locking eyes with everyone and no one, and blindly leaping into the crowd. A sense of apprehension as I floated mid-air, contemplating the sonic bonfire enveloping me, fear as I realized I hadn’t determined a clear landing zone… and immense relief and gratitude as a multitude of arms kept me suspended above the floor, to give me a short tour of DC9’s modestly sized stage hall.

Plague Vendor fed off this seemingly symbiotic force as well, increasing their dynamics, tempos and energy as the night progressed. Each member in the band put their entire soul into each and every single song that they performed. Sharing his time between doing jumping splits on stage, dancing with his most ardent supporters or hanging from DC9’s low-hanging rafters, Brandon Blaine gets an A+ for frontman duties.

As I walked home, disheveled, sweaty and slightly confused, I was surprised to note that the urgency was still there. It just won’t quit.