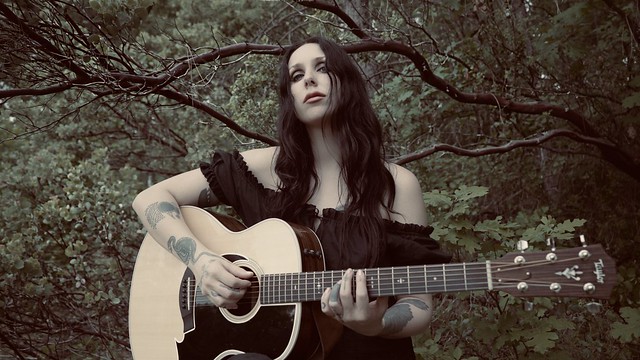 Chelsea Wolf recently released Birth of Violence, her sixth studio album, via Sargent House. She’s traveling on her American Darkness Tour, and she arrives at 9:30 Club on Sunday, Nov. 3.

Chelsea has always been a conduit for a powerful energy, and while she has demonstrated a capacity to channel that somber beauty into a variety of forms, her gift as a songwriter is never more apparent than when she strips her songs down to a few key elements. As a result, her solemn majesty and ominous elegance are more potent than ever on her new album.

Birth of Violence is a return to the reclusive nature of her earlier recordings where we see her withdraw into her own world of enigmatic and elusive autobiography. But the album also exists in the present; she examines navigating the world as a woman and addresses modern tragedies such as school shootings and the poisoning of the planet.

Watch the official video for “American Darkness” by Chelsea Wolfe on YouTube:

“Sounding like she’s been sequestered on a mountain top with nothing but books on witchcraft and a handful of Joni Mitchell records (reflecting her actual retreat into the woods to work on new material), the singer/songwriter flexes her emotional and musical growth on this gorgeous, introspective cut,” said Revolver of Chelsea’s new music.