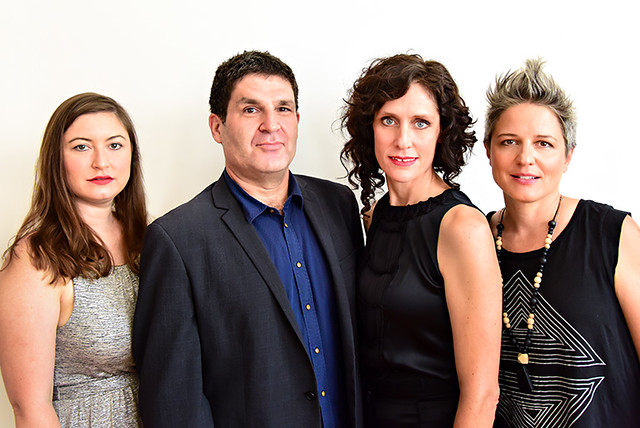 Jenny Scheinman is a highly accomplished violinist and fiddle player, as well as a singer. Her work straddles the worlds of jazz and roots music. In September, she appeared with Robbie Fulks at Jammin Java. On Sunday, she played with Alison Miller’s Parlor Game at the National Gallery of Art.

At the show, Mark Engleson of Parklife DC spoke with Jenny about the range of her work, her musical background growing up, and her influences. They also discussed the experience of being a Jewish artist in the roots music world.

Mark Engleson: What kind of music did you grow up listening to?

Jenny Scheinman: I listened to all sorts of stuff — jazz records, my dad’s a folk musician, so the folk canon. We had a lot of classical records as well. We had all sorts of music. I grew up in the country, so the music of my hometown was a lot of fiddle music and country music.

ME: Whereabouts did you grow up?

ME: And you went to Berkeley, right?

JS: I did. I went to a bunch of different colleges, but I did end up at Berkeley. UC-Berkeley, not Berklee School of Music.

ME: You’ve played with a lot of people. What are some of the more interesting gigs you’ve had?

JS: I’ve been in Bill Frisell’s band for about 20 years, that’s been kind of a main mentor. I toured with Bruce Coburn, that was really fulfilling. And Rodney Crowell. You can look at my discography; in the jazz world I’ve played with Brian Blade, Jason Moran, those are pretty amazing. I’ve been in Alison Miller’s band for many years. I’ve played with all sorts of people — New York jazz musicians as well as sort of a sprinkling of iconic country and songwriter artists — Madeline Camrus. I’ve worked with Lucinda Williams. Of course, Robbie [Fulks] has been fun.

ME: The violin and fiddle are the same instrument. Is there a lot of difference in technique?

ME: You’re also a singer. Did you grow up singing?

JS: I did. My family all sang, and my dad sang. I grew up singing a lot.

ME: It’s pretty clear that you come from a Jewish heritage; one of your records is called The Rabbi’s Lover.

JS: My mom is not Jewish. Technically, I’m not Jewish, but I grew up with a Jewish grandmother. We weren’t observant, but culturally Jewish. My grandmother grew up in Palestine.

ME: As you said, your dad was a folk musician. There are a lot of Jewish folk musicians. You find less in country. Did you encounter any friction, any resistance going into it?

JS: I didn’t. I was lucky. I was set up with really great gigs. I’ve heard funny stories. I’ve encountered more anti-Mexican racism in the country world than anti-Jewish. Traditionally, the Southern white culture is suspicious of Jews, I guess. I’ve heard some comments that were distasteful. But I didn’t really encounter any friction personally. I’ve worked with really progressive, mature artists.

It’s not like I was pounding the pavement as a young kid. I’ve mostly lived liberal places. I’ve lived in California and New York and spent a bunch of time in Nashville, but that was really later in my life.

The most close-minded young musician usually opens up later in life because they travel the world and they lose a lot of their bigotry. Something’s that’s their campaign promise or something to their fans.

I’ve led a fairly sheltered life in the music scene and I’ve in terms of who I’ve worked with, relatively speaking, and I’ve not been to the deeper, less worldly country scene which is filled with anti-Semitism, I guess.

ME: I’ve talked to one guy who’s done both blues and bluegrass, and he said was that what he experienced in bluegrass was that people would make indirect comments. They wouldn’t necessarily throw slurs at him, but when they knew he could hear, they would slip something into a conversation. There’s sort of a particularly Southern way of insulting people where it’s more indirect.

JS: Couched in Southern hospitality. I have kind of a funny story. I was with Robby once, in Portland, and he has a shirt that says “I Love Jews.” It was under his button-down shirt. A lot of my Jewish relatives were in the audience. For the encore, he barges on stage, dancing some ridiculous thing and rips off his outer shirt. And there’s the shirt that says “I Love Jews.” Of course, like Robby, it’s an intentionally comic statement, but you don’t know what to do with it. You kind of make up your own mind. Their faces were totally baffled and curious and wondering whether they should be offended, and to take it seriously, or what. We’ve joked about that moment many times, and he says, “It’s true. I love Jews!”

ME: Robbie seems like a very cool guy. Very smart. Should be more appreciated.

JS: He’s getting there.

ME: Maybe he’ll be like Bettye LaVette and have one of those fourth decade explosions.

ME: What kind of projects do you have coming up that you might want to talk about?

JS: This band is sort of my main focus right now, Parlor Game. It’s totally a joy. I can’t imagine replacing anybody with anybody I like better. It’s really my favorite musicians on the planet and we’re forming a real language that is new and intuitive. To hear them play my music is super fulfilling and it’s fun and it’s an adventure every night. It’s focused on the songs, but it’s also super interactive and improvisational and groovy and fucking great. This band is really, really great. I’m just basking in this band now and looking at a future with this band. I also have a record that I’m going to make eventually. I have some gigs coming up with Robbie. Various things, but this is kind of my focus now.

ME: How long have you been with Parlor Game?

ME: Have you played the National Gallery before?

JS: Yeah, I’ve played there before.

ME: What was your entree into the world of country/Americana?

ME: Bill Frissell is a legend in both the jazz and roots music worlds. What have you learned from working with him?

ME: What inspires your own writing?

JS: Everything I hear at random and by intention. I’m a very osmosis kind of artist.

ME: A large number of Jewish musicians go into folk. Why do you think that is?

ME: Thanks for taking to me!

JS: Thanks for chatting!

For more info on Jenny Scheinman’s music, visit her website.