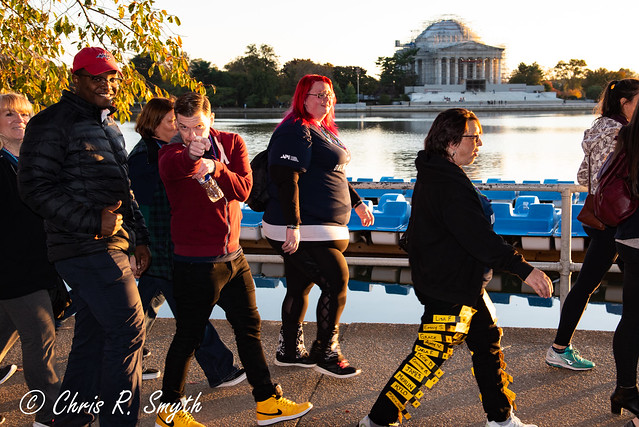 Brent Smith of Shinedown participates in the Out of the Darkness Walk on Nov. 2, 2019. (Photo by Chris Smyth)

An hour before sunset on Saturday, more than 2,500 people disembarked from the steps of the Lincoln Memorial for a long trek around the tidal basin. The walk was part of the American Foundation for Suicide Prevention’s Out of the Darkness Walk.

Leading the walk for the second straight year was Brent Smith, lead singer of Shinedown. Invited by radio station DC 101, and walking as part of their One More Light team, Brent took the time to talk with many of the participants, and to lend a compassionate ear to those who told him of the reasons why they were walking.

This march in the nation’s capital was just one of hundreds that take place across the country over the course of the year, all to help raise funds and awareness for suicide prevention. With the walk starting soon after the Nationals’ championship parade concluded, many of the walkers were sporting the curly W. It was clear that after spending an afternoon reveling, many spent that evening remembering.

During the walk, Brent Smith spoke with Chris Smyth of Parklife DC about his reasons for returning to participate again.

Watch the official music video for “Monsters” by Shinedown on YouTube:

Chris Smyth: Why are you out here walking for the second year in row?

Brent Smith: It’s the second year that I have been happy to come here to Washington, DC, and be a part of this extremely incredible organization to bring awareness to suicide prevention between the American Foundation for Suicide Prevention and also DC 101. I’ve been asked who are you walking for today? In a lot of ways, I’m walking to get the percentage, the number of suicides per year to go down. For that number to decrease. For that awareness to be brought into the forefront.

Being in the industry that I’m in, and being in the arts and performing, there are a lot of people in my life that I have lost along the way. Because either they didn’t have a person to talk to, or they felt that depression — or drug addiction or alcoholism had put them into a position where they didn’t feel like they could go on living. And a lot of those men and women that I lost, I miss them dearly. But at the end of the day, you have to look at the big picture here. This year, everybody that is out here, it’s probably three to four times larger than last year. I wouldn’t say that ‘it’s six of one, half a dozen of the other,’ but the reality is that is good and bad.

CS: So the ultimate goal is to not need these walks?

BS: I think that the walks are important. Because we are trying to get the number of suicides down to zero percent. And then we could actually come to these walks and celebrate the fact that that number is so low or nonexistent. Now, is that ever going to happen in our lifetime? No, because nothing is perfect.

But, I think that if we were to stop walking, it would get worse. And I think that everyone here is here for not necessarily closure but to make sure that their voice was heard, whether it’s for a family member, a friend, or someone they knew. Their story was heard. So hopefully, that story can save someone else. And I don’t think that’s ever not going to be important. It’s an emotional topic. It’s hard for people to talk about.

That’s one of the reasons we tell people the worst thing you can be is quiet. Don’t be quiet. Sometimes people feel like they are going to be embarrassed, or they’re ashamed. They feel like they are showing weakness by saying that they are depressed or that they don’t feel 100% like themselves. They feel like they are going to be judged. That might be the case in some scenarios. But what we don’t want people to do is live by the fact that only one or two people are going to feel that way. You have to talk about it, so that eventually someone does hear you and knows how to help you. If they can’t help you professionally, they work with you to put you in front of someone who can help you.

It’s the biggest thing in the world, and it sounds simple, but it’s not necessarily. But I think what everyone should take from these walks is the awareness. The awareness to not be quiet. That’s the biggest thing. It’s not always going to be easy to talk about these heavy subjects, but it’s imperative because it ultimately can save a lot of lives.

With donations still being counted, this year’s event surpassed last year’s total by raising more than $375,000 as of this writing. Donations to the DC event are being accepted until the end of the year, and can be made at the AFSP Out of the Darkness DC Walk web page.

Here are some pictures of the Out of the Darkness Community Walk with Brent Smith in DC on Nov. 2, 2019, courtesy of Chris Smyth. 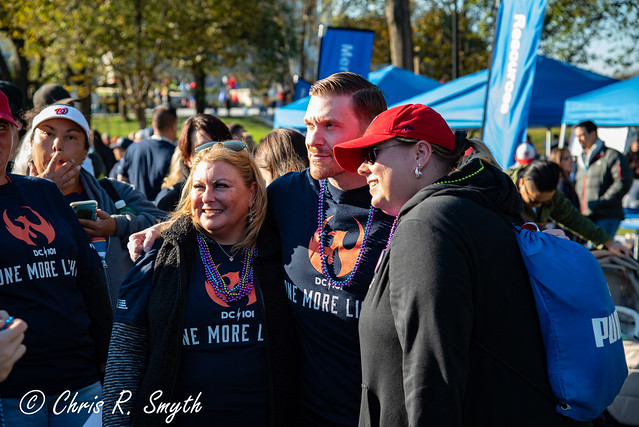 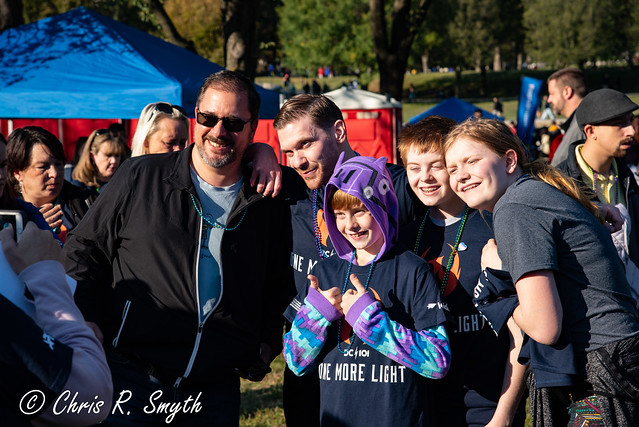 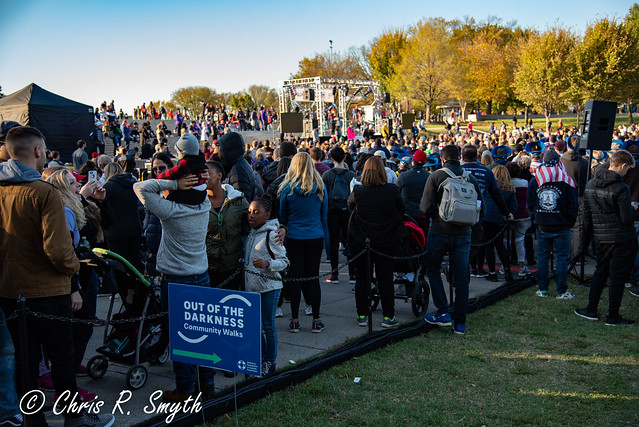 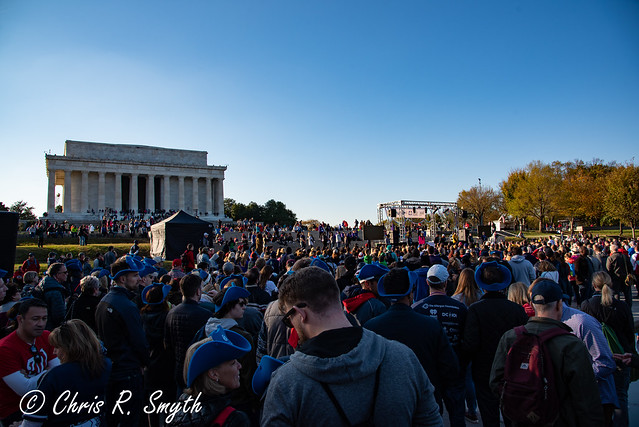 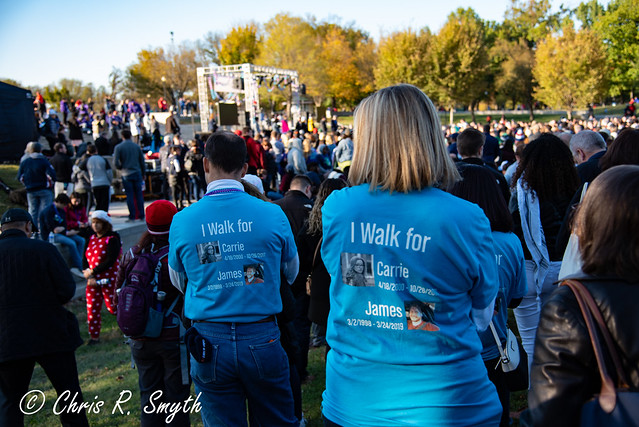 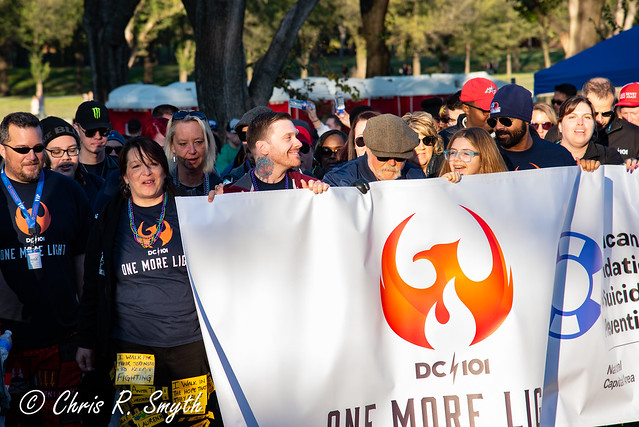 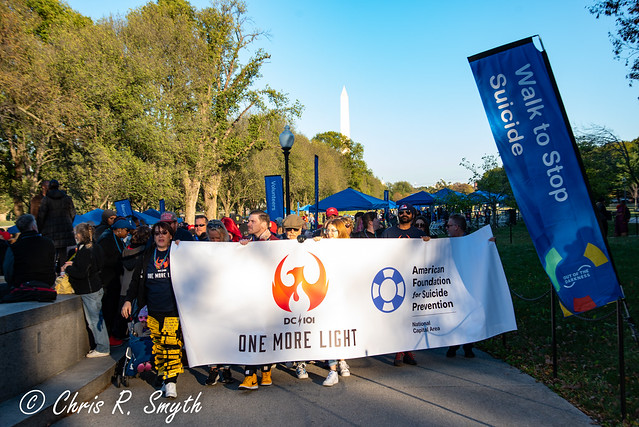 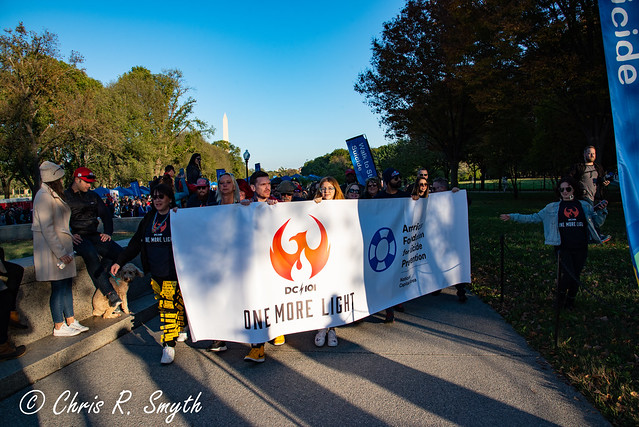 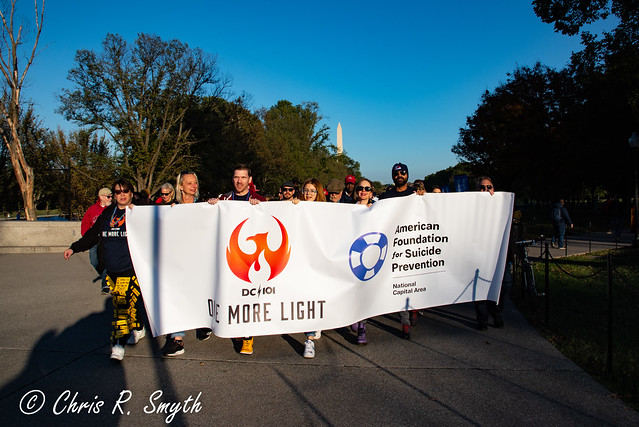 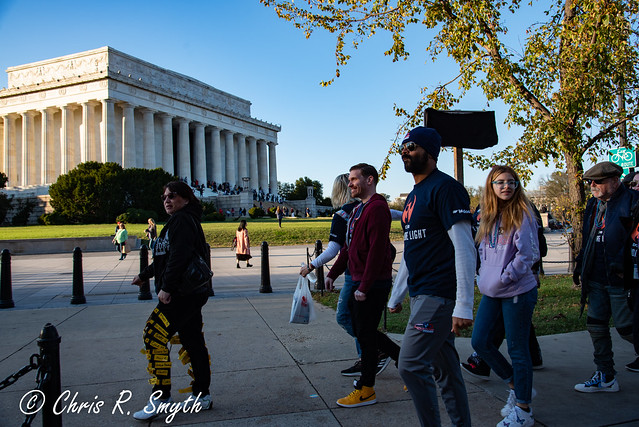 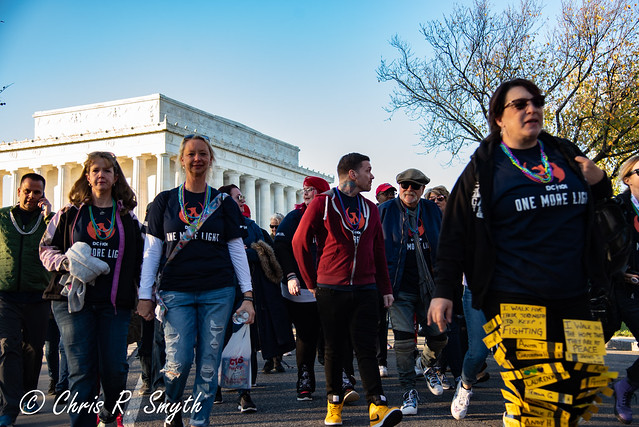 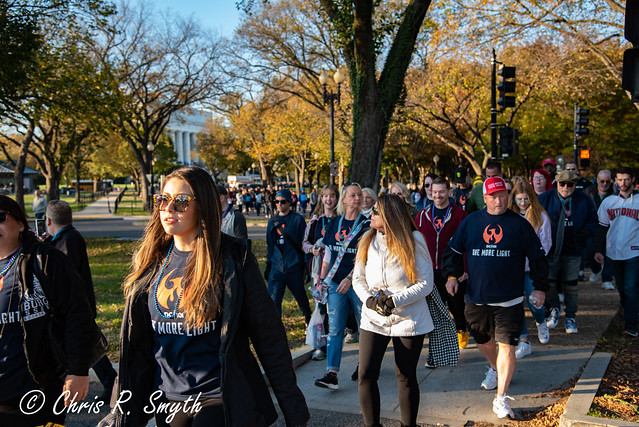 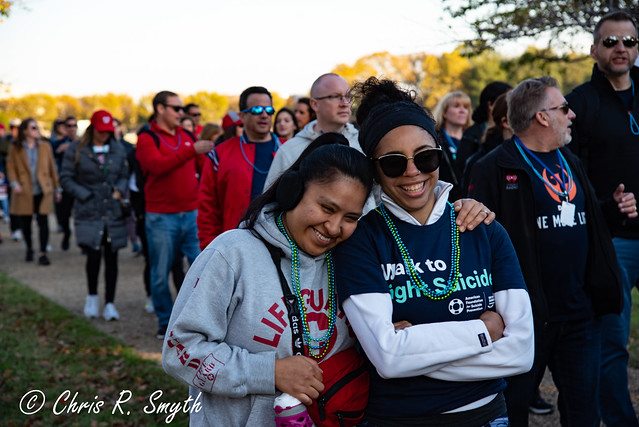 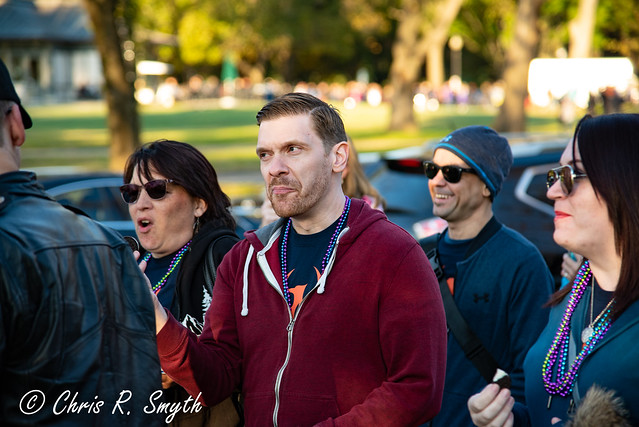 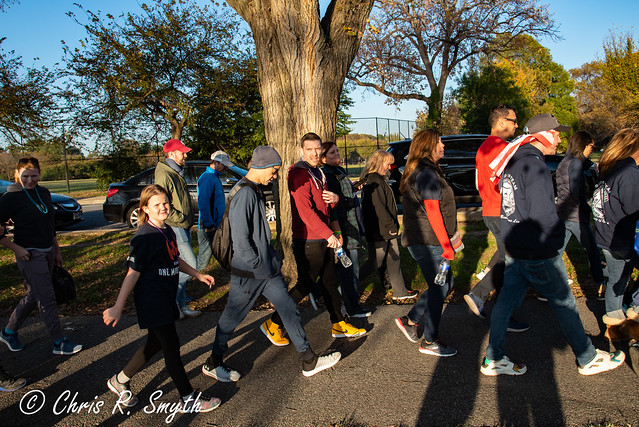 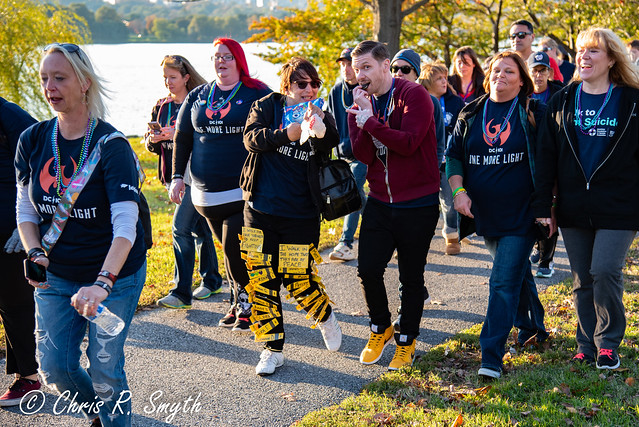 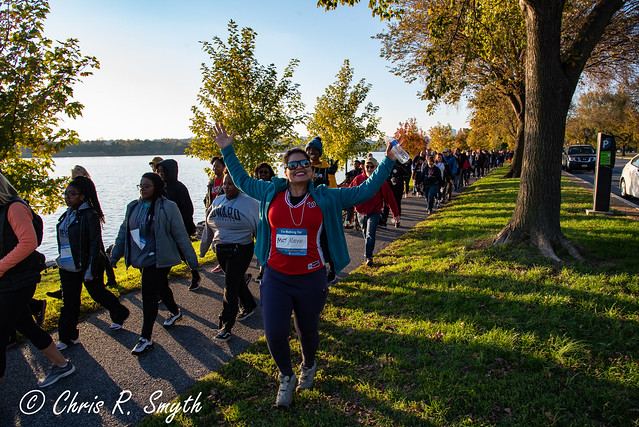 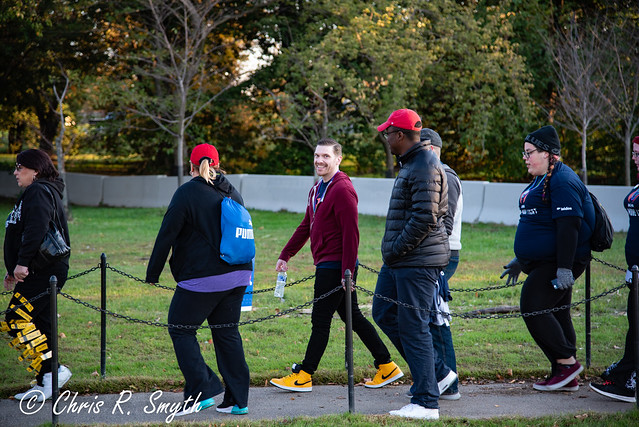 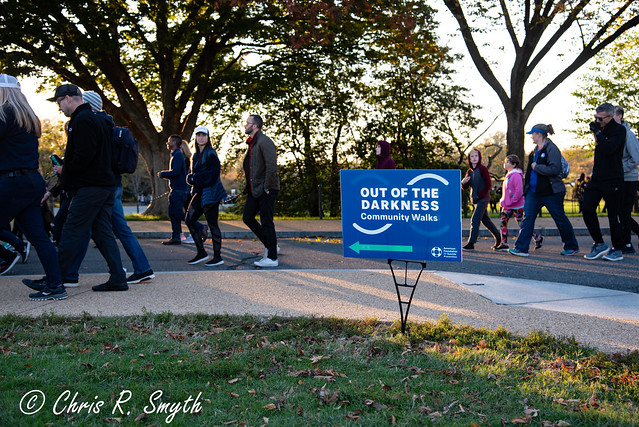 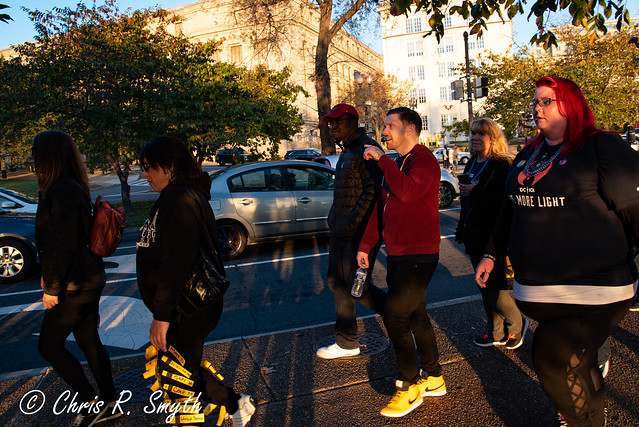 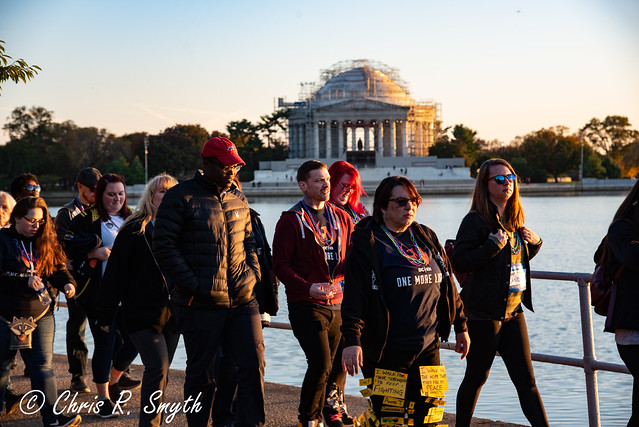 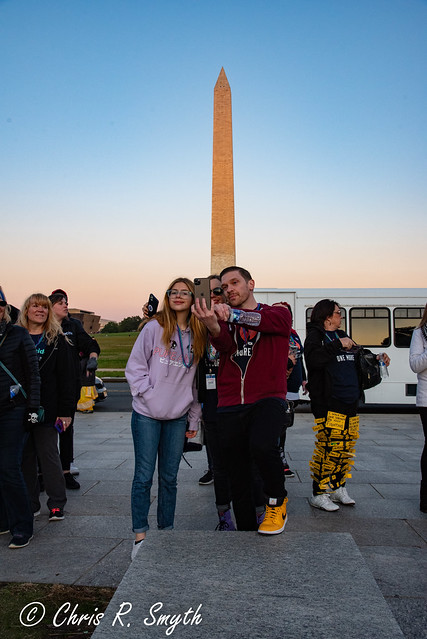 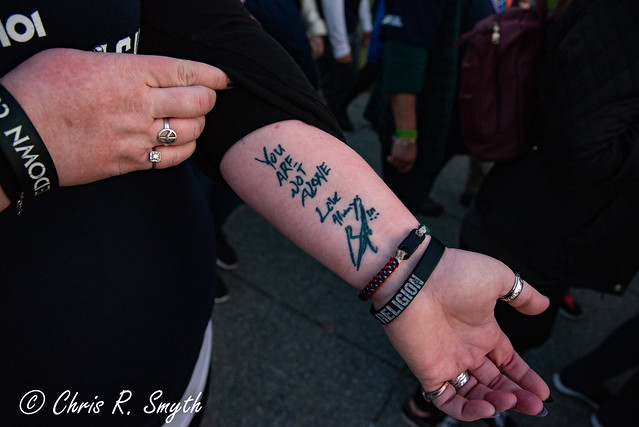 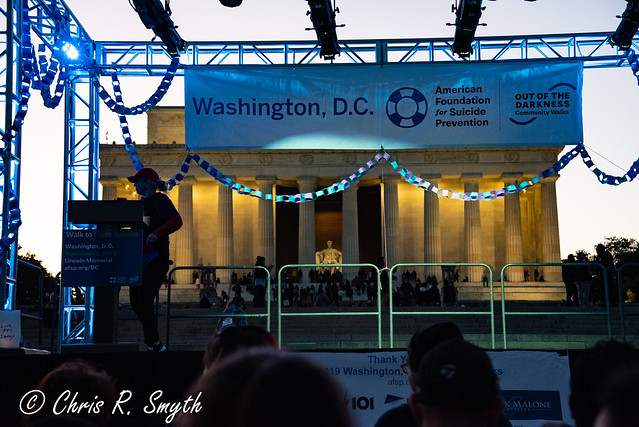 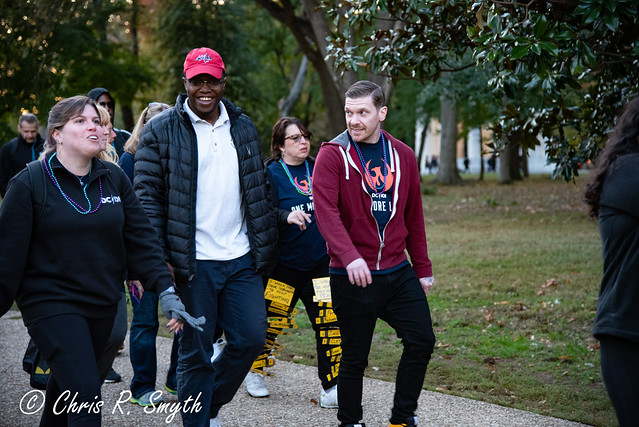