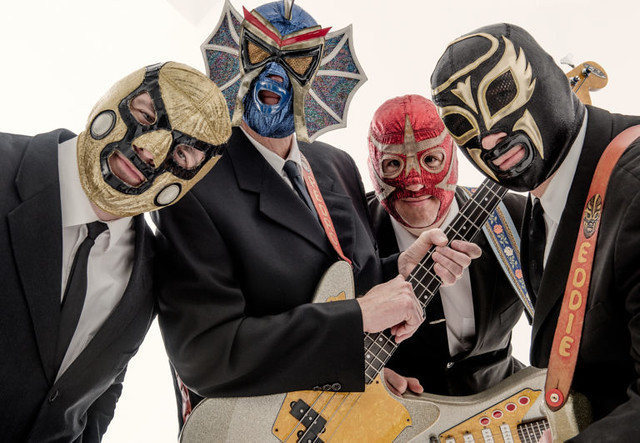 Asked about the humor in his music, Frank Zappa said that music is supposed to be entertaining. I imagine that the members of Los Straitjackets would say the same thing. Los Straitjackets, who played the Pearl Street Warehouse recently, lean all the way into their gimmick of luchadores-turned-instrumental rockers. Dressed in matching suits and Mexican wrestling masks, they address the audience only in Spanish.

You can’t sleep on Los Straitjackets as talented musicians, though. The band’s discography is consistently strong. This spring, we caught them touring as the backing band for legendary Brit songsmith Nick Lowe, who has his own quirky sense of humor. In 2017, the released an album of instrumental covers of his songs: What’s So Funny About Peace, Love and Los Straitjackets. On Nov. 2, they played “Cruel to Be Kind” at Pearl Street Warehouse.

Los Straitjackets carry the torch for the instrumental surf rock of the late ’50s and ’60s. They’re influenced by Dick Dale, and they name-checked The Ventures. That two members of the band hail from Southern California is an unsurprising coincidence. Founded in Nashville, they also have a bit of a rockabilly twang in their music. They’re definitely not a country band, though.

One of Los Straitjackets’ trademarks is their covers of iconic songs from pop culture. If you’ve ever wanted to hear what “My Heart Will Go On” sounds like in the style of surf rock, these are the guys. Even for someone who doesn’t especially like Celine Dion, the song has a catchy melody, and they trade on its familiarity — that song was everywhere in the mid-late ’90s.

A hearty cry of “¡Viva Les Paul! ¡Viva Batman!” prefaced the band’s rendition of the theme song from the campy ’60s TV show. The crowd jumped in with vocals, chanting the tune’s single word. While their interpretation of Celine Dion sounds quite different from the original, their cover of “Batman” has a more familiar feel. This is not so surprising, seeing as they’re pretty grounded in that decade.

Before playing the Addams Family theme song, Los Straitjackets showed the audience a small sign reading “More Cowbell,” a reference to the Saturday Night Live skit featuring Christopher Walken. They delivered on the cowbell, playing it where the finger clicks fall in the tune.

Eddie blazed through a solo on “Space Mosquito,” and then the drummer, who goes by Gringo Starr, pulled out a rubber chicken and squeaked it. From that point on, the rubber chicken was a recurring feature of the evening’s performance. If you don’t think that a man in a suit and a lucha libre mask squeaking a rubber chicken is fantastic, we are very different people.

For their encore, the drummer came out and did a little funky dance, and then the rest of the band joined him onstage. They busted out their connection to this area, “University Boulevard,” and closed with “Tequila.”

Los Straitjackets are a damn fine band, though I am skeptical about their strengths as luchadores.