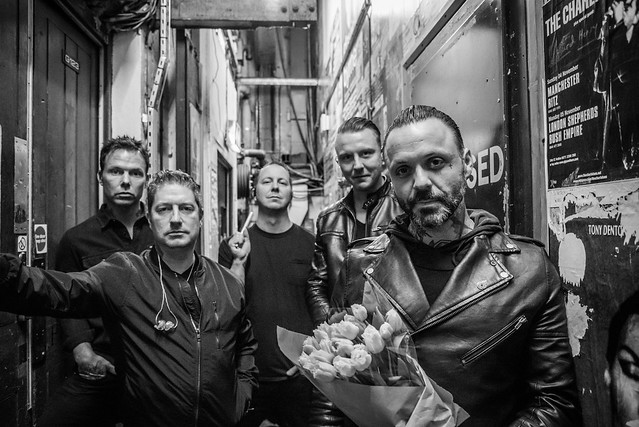 A must-see on the fall festival circuit? The upcoming music documentary Get Back Up, which centers on Justin Furstenfeld of Blue October and his struggle with addiction.

Meanwhile, catch Blue October, back and reinvigorated onstage, in performance at Baltimore Soundstage on Thursday, Nov. 14.

That’s exactly what Justin’s wife Sarah said to him, as seen in the powerful and riveting new trailer for Get Back Up. While the ultimatum is intended to be focused on his immediate family unit, this demand of finality can be seen as a universal plea that includes his band, management, and ultimately his fans, as witnessed in powerful and gripping feature-length film as directed by acclaimed Emmy-winning director Norry Niven (Dexter, Chasing Shakespeare, American Idol).

The trailer which gets released on YouTube today offers a snapshot of Blue October’s — and more centrally, Justin’s — struggles and near-immolation with depression, drug, and alcohol-abuse — and how it affects the orbit around him and his ultimate and hopeful redemption and triumph of the human spirit.

Watch the official film trailer for Get Back Up on YouTube:

Filmed over the span of nearly a decade through hundreds of shows worldwide, Get Back Up isn’t just the story of Blue October’s meteoric rise to the top of the charts and then its equally quick demise. The film also deals with Justin’s mental health issues and thoughts of suicide which leads to a more personal story documenting his struggles and how they fractured and damaged his loving family.

“I always knew my head and heart were different. My head was darker… and my heart was much, much bigger,” said Justin in the film’s trailer. With his self-flagellation and recovery splayed out in the documentary, what ultimately saves him is his newfound balance between head and heart.

Now that Justin is healthier, in mind and body, he and Blue October also have rebounded. The band’s music has witnessed a resurgence with the release of their ninth album, I Hope You’re Happy, which debuted at #7 on Billboard’s Album Chart and #2 on its Alternative Album Chart. Known for their previous platinum singles like “Into the Ocean,” “Hate Me,” and “Calling You,” the new album, which embraces Justin’s new lease on life, enjoyed immediate success with its first two singles “I Hope You’re Happy” and “Daylight,” both of which charted high on US Alternative Airplay Chart.