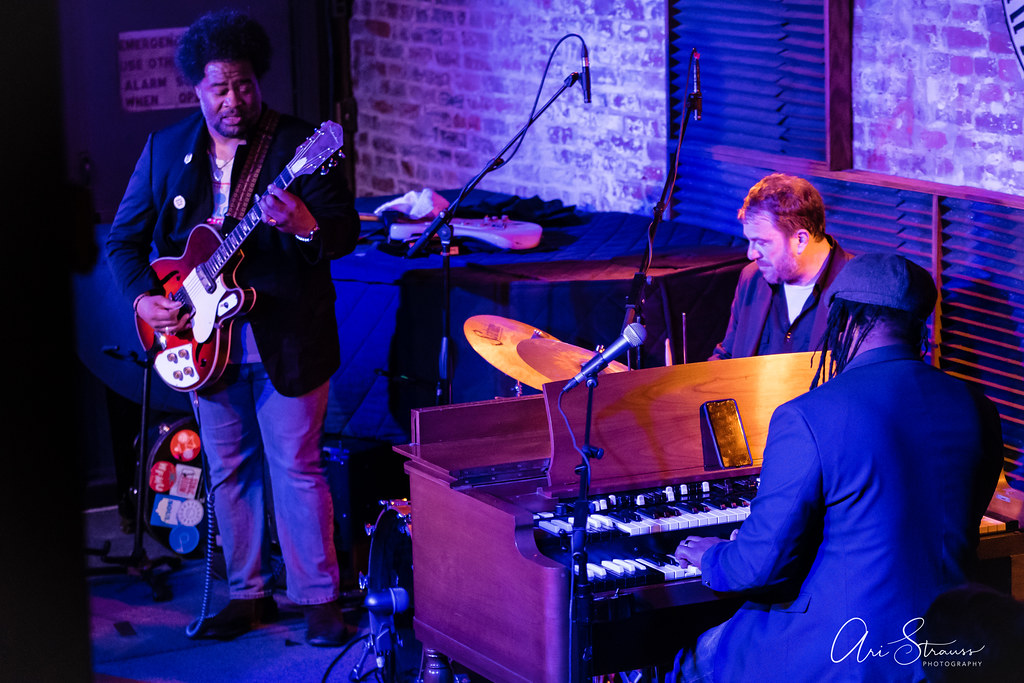 A friend from college told me, “If you get the chance to see Delvon Lamarr Organ Trio play live, do it! You’ll thank me later.”

When I saw the Seattle-based instrumental soul-jazz trio was coming to DC to play at legendary Blues Alley, I heeding my friend’s advice and made plans to be there. The historic Georgetown jazz supper club typically hosts two performances nightly, 8pm and 10pm; I attended the trio’s early show on Nov. 6 and can sum up my experience in one word: Outstanding!

Delvon Lamarr Organ Trio (also know as “DLO-3”) formed in 2015 and has two album credits to date. Their debut album, Close but No Cigar, was released independently in 2016 and was re-released in 2018 by Colemine Records, and Ohio-based funk & soul record label. The album reached No. 1 on Bilboard’s Contemporary Jazz Albums chart and No. 3 on the Jazz Albums chart.

Listen to Close but No Cigar by Delvon Lamarr Organ Trio on spotify.

The Delvon Lamarr Organ Trio currently consists of Delvon Lamarr on the Hammond B-3 organ, Jimmy James on guitar, and Doug Port on drums. Their soul-jazz groove is reminiscent of sound from the Stax Records era. Indeed, the track, “Little Booker T” on Close but No Cigar” nods to soul Hammond B-3 master Booker T. Jones, leader of Stax Records legendary house band, Booker T and the MGs.

Anyone who has seen DLO-3 perform live will surely fall in love with their groove. There’s a loose setlist, but each performance is a unique improvisational jam session. The band doesn’t have formal rehearsals or writing sessions — there’s no time to when you’re constantly on the road — they do it all on the stage. When I talked to Delvon after the show, he told me, “After eight months of touring and playing on stage, we have enough new material for more than one album, maybe enough now for two.”

The show opened up with “Say It’s Alright,” a number which Delvon announced will be on their next album, due out early next year. They immediately moved into “Memphis,” a tune written in 1970 by Big John Patton. Next came another new song, “Girly Face,” which will also be on the next album. Delvon said he wrote it recently for his 14-year old daughter whom he calls his “little girly.”

Guitarist Jimmy James, who played a vintage Silvertone guitar for most of the set, picked up a white Strat for “South Leo Street Stomp” and played the hell out of it, at one point holding it up to his face to, I assume, strum the strings with his teeth. Midsong, he was in the midst of a masterful solo when he broke his G-string. Ain’t no thing — he calmly unwound what remained of the string from its tuner knob, dropped it to the floor, and kept on going with five strings.

Delvon and Jimmy’s repertoires and history of music are very similar so the two are simpatico on stage. In a 2018 interview with Old Rookie, a Seattle-based entertainment review blog, Delvon said, “We’ll be playing a song, one of our own tunes, and he’ll quote a song and I’m just like, “got it” and ill change the whole thing. That’s what I love about playing the organ, when you carry the bass, you can mold the song into whatever it is you want it to be. When we do our live shows, we don’t know what’s going to happen. Whatever Jimmy was listening to earlier in the day, he may play that on stage, and I try to catch that. It happens so fluently that most people think we rehearse it that way. We have never rehearsed any of that stuff. We don’t even talk about it. It just happens. That’s what I love about these guys. They listen and we all communicate really well.”

You can see it in the way Delvon and Jimmy have eyes constantly trained on each other during a performance. They are looking for where the other one wants to take the groove next.

At one point midway into the show, Jimmy seemed to be fiddling around on his guitar waiting for Delvon to count off the next song and suddenly he broke out into the opening riff of “Whole Lotta Love” by Led Zeppelin. Delvon and quickly caught on and they dove headfirst into the song with Delvon working out the vocal melody on the organ.

Midway through, Jimmy’s eyes grow wide and he looks at Delvon and as quickly as it all began, Jimmy switched things up yet again and broke into “People Get Ready” by The Impressions. After a while it was Delvon’s turn to switch things up. Playing off something Jimmy did on the guitar, he starts hammering out the melody of “Everybody Wants to Rule the World” on the organ. They improved something from the ’70s, then went back in time to the ’60s, and then jumped ahead to the ’80s, all in the course of about three minutes.

From there, they jumped right into “Move on Up” a Curtis Mayfield cover and the first track from their live album, Delvon Lamarr Organ Trio, Live at KEXP.” The album was recorded live in 2017 at Little London Plane during the Upstream Music Festival in Seattle. This track is the first exposure I had to DLO-3 and I was hooked as soon as the organ kicked in. You can watch the live recording on YouTube.

The band finished their set with “Top Goin’ Down Bottom Goin’ Up” (which coincidentially is the last track off the live album). Halfway through the song, the guys broke out into what I call a “cover improv-o-thon.” They transitioned into a cover song for 30 seconds or so, then come back to a couple phrases of the original song, then quickly jump into another cover song, over and over again.

I lost track of all the songs they spontaneously jumped into, but the list included “Real Slim Shady” by Eminem, “Crazy” by CeeLo Green, “Come Together” by the Beatles, “My Girl” by the Temptations, “Jump” by Van Halen, “Just a Friend” by Biz Markie, and “Eye of the Tiger” by Survivor. The audience really got into it and sang along for a lot of the covers.

The Delvon Lamarr Organ Trio has spent the better part of eight months on the road, touring in the United States and Europe. The DC shows and a pair of gigs in NY and NJ are the last dates on the current run.

When the band gets back to Seattle, they have plans to immediately go into the studio and cut a new album which they hope to release in the early spring of 2020. Then, after the first of the year they head back on the road to tour with Lettuce. Check out DLO3’s website for information on upcoming tour dates and album releases.

I’d be remiss if I didn’t say a little about the venue. Blues Alley is the nation’s oldest continuing jazz supper club. Founded in 1965, the intimate music venue tucked away in a Georgetown alley off Wisconsin Ave. has showcased jazz legends such as Dizzy Gillespie, Sarah Vaughan, Nancy Wilson, Grover Washington Jr., Ramsey Lewis, Charlie Byrd, Maynard Ferguson, and Eva Cassidy in its storied history.

The club, which is situated in an 18th century red brick carriage house, specializes in authentic Creole cuisine, steak and seafood dishes. Pairing its Tasty food with excellent music, Blues Alley offers patrons a unique ambiance, reminiscent of the jazz clubs of the 1920’s and 30’s. It is among the treasures of the DC music scene.

I’ll close with the same advice my college friend gave to me: If you get the chance to see Delvon Lamarr Organ Trio play live, do it! You can thank me later.

Here are some more photos of the Delvon Lamarr Organ Trio performing at Blues Alley on Nov. 6, 2019. All images are from the 8PM show and are copyrighted and courtesy of Ari Strauss. 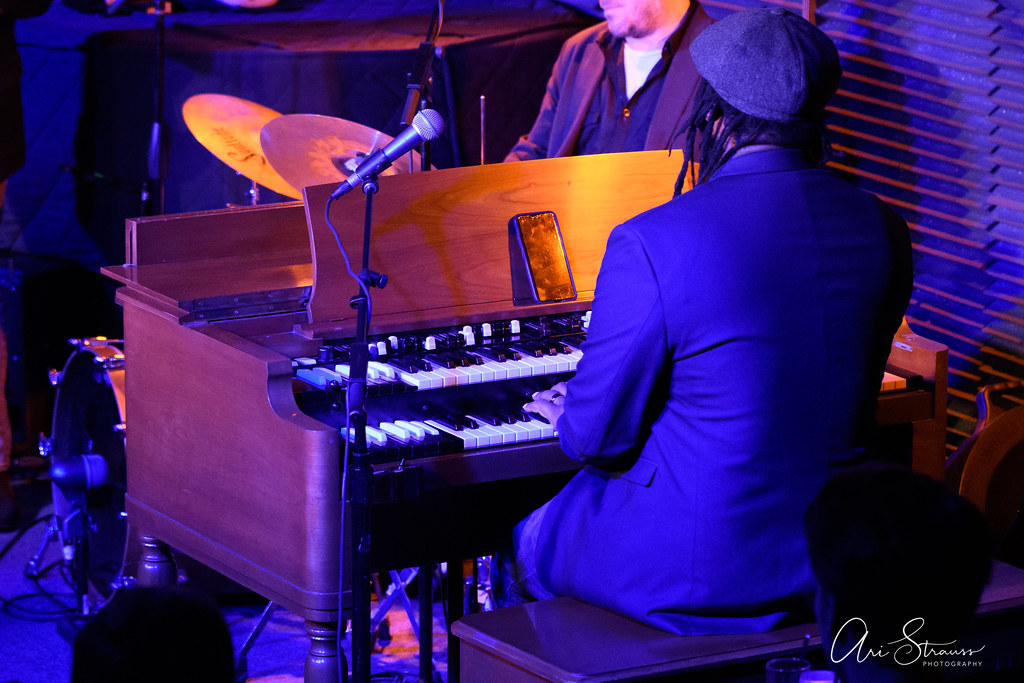 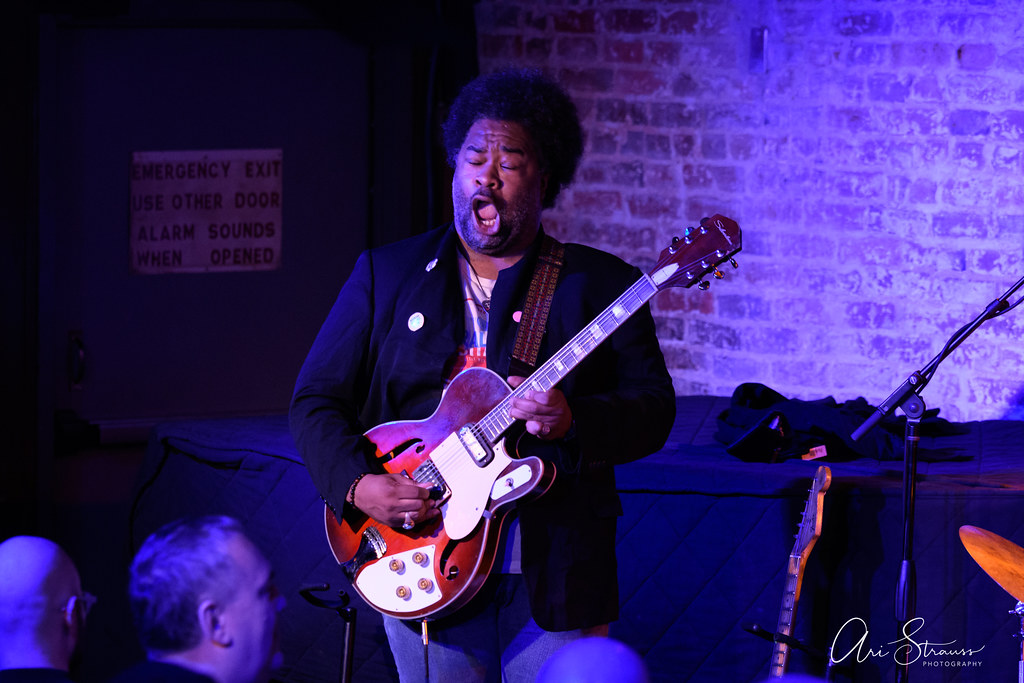 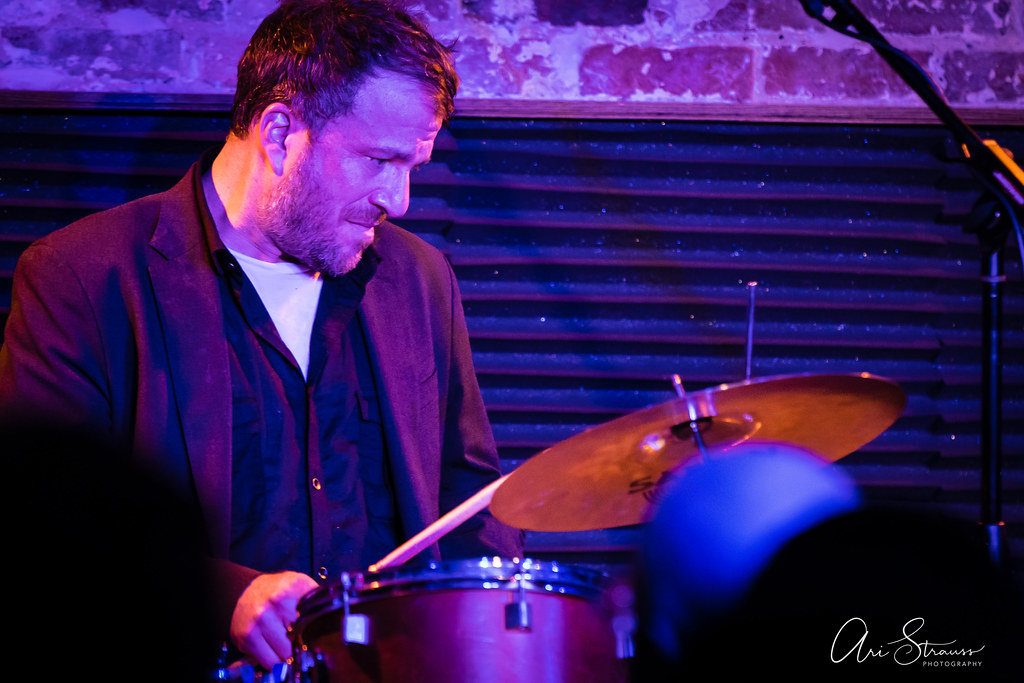 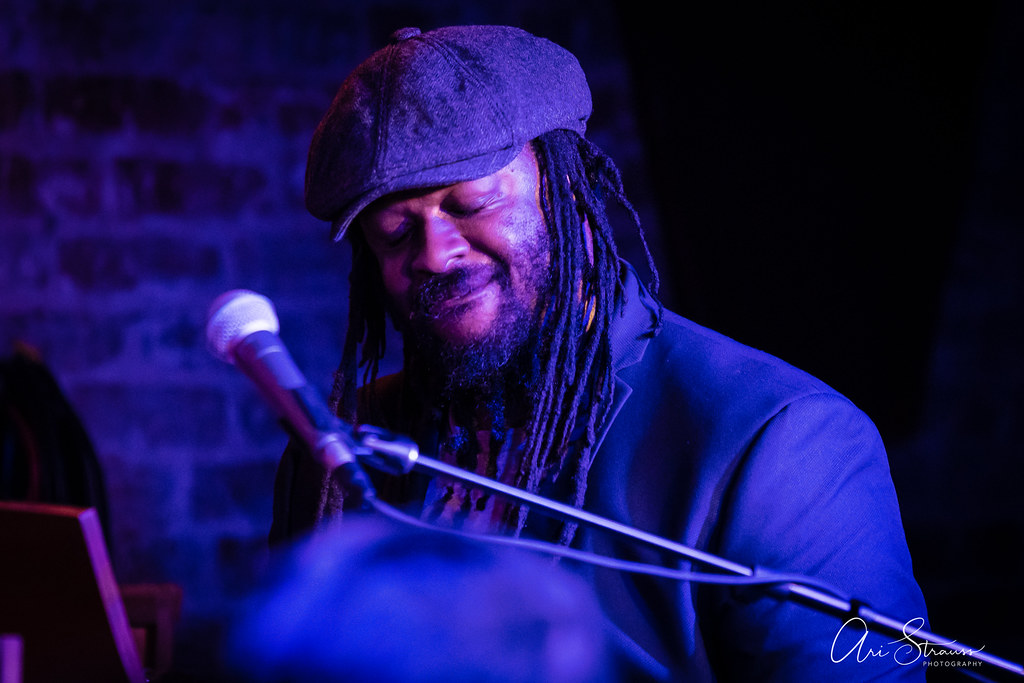 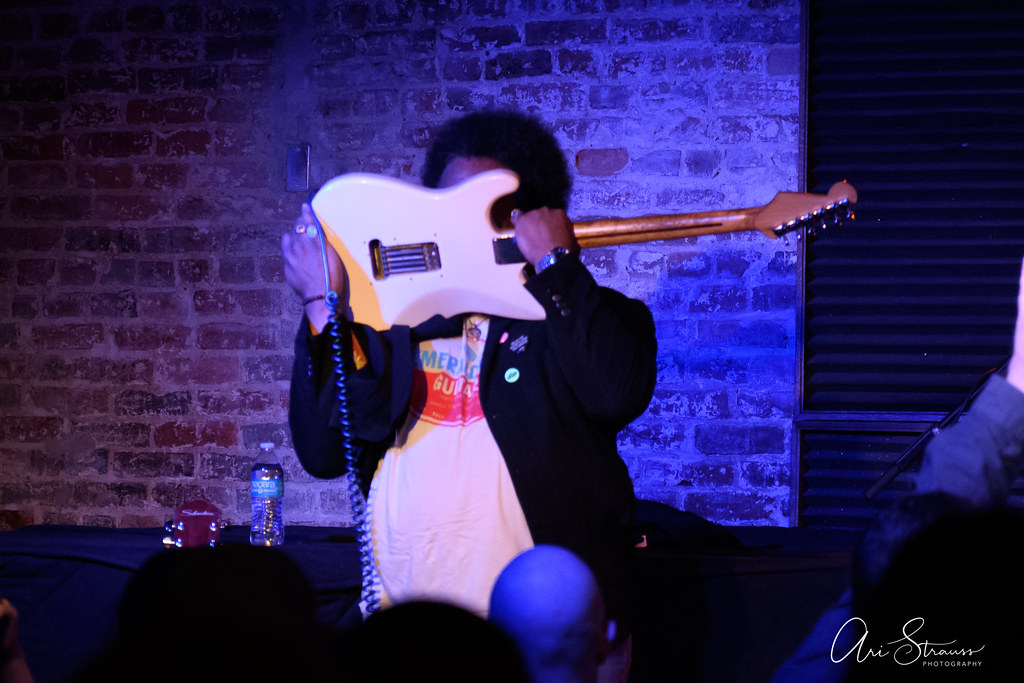 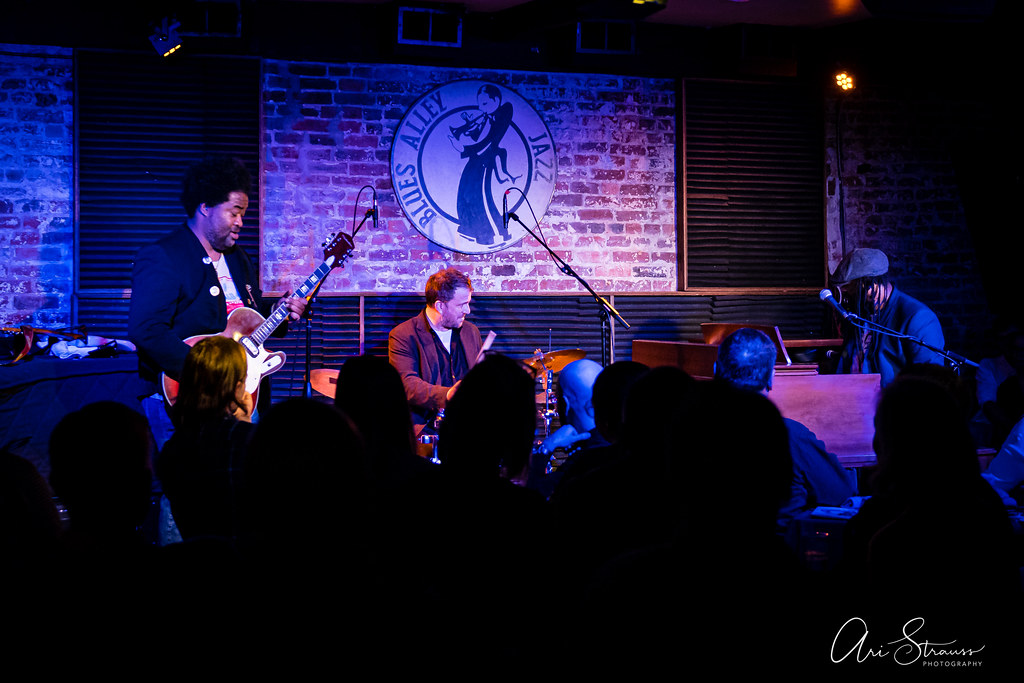 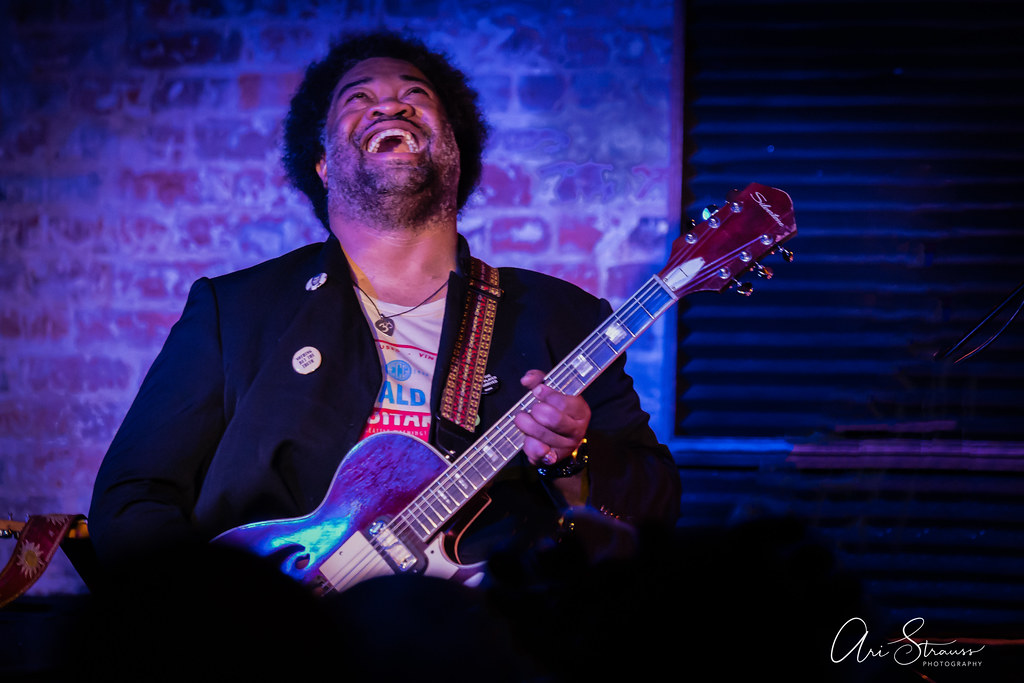 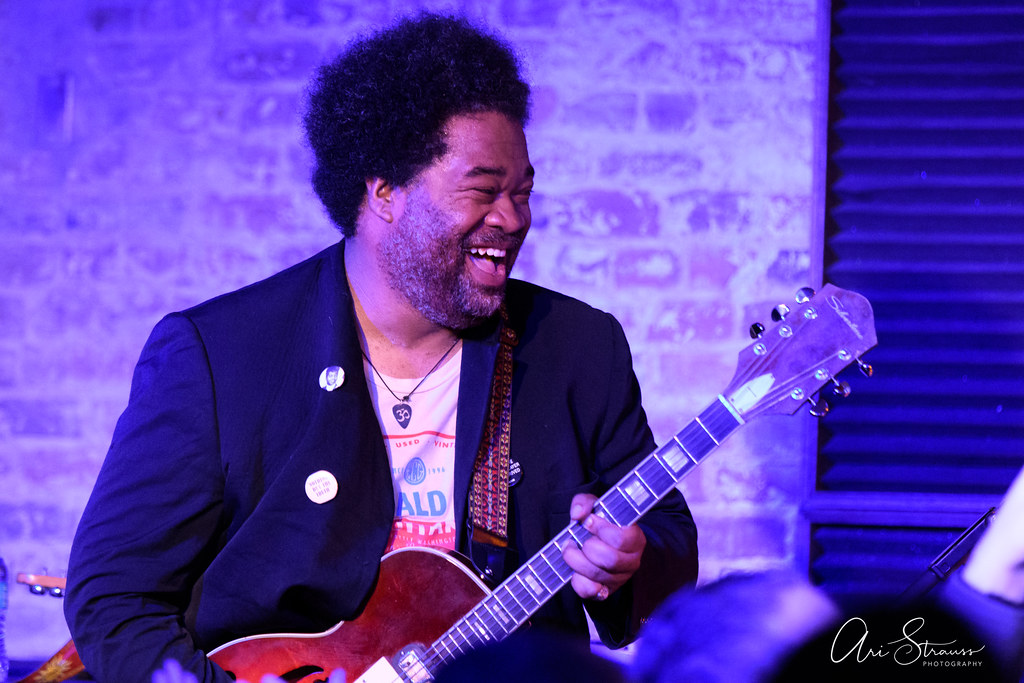 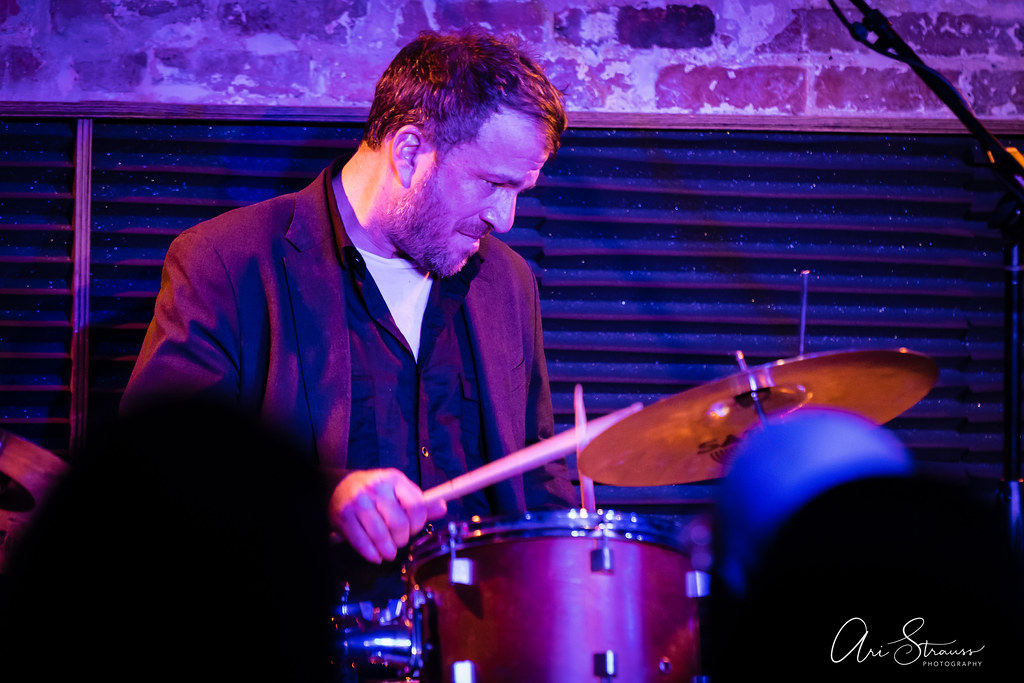 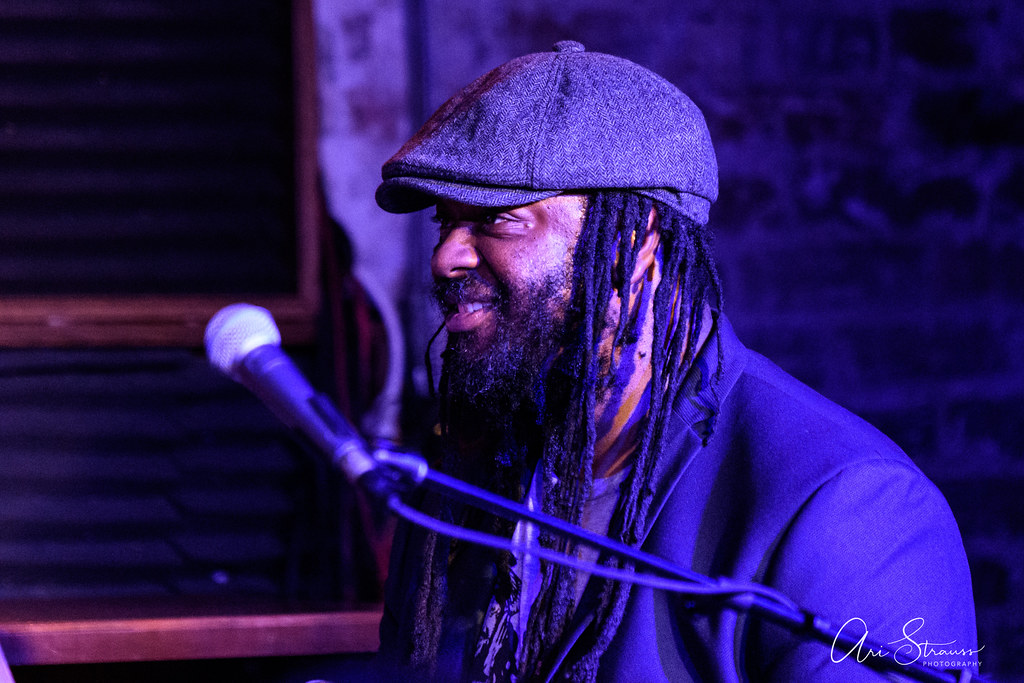 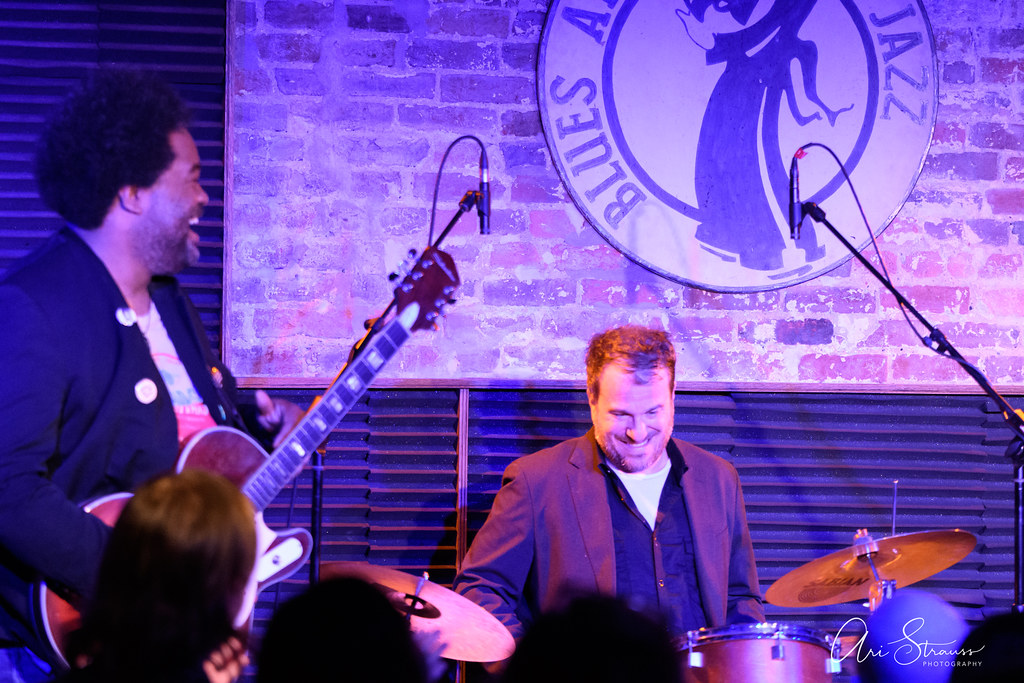 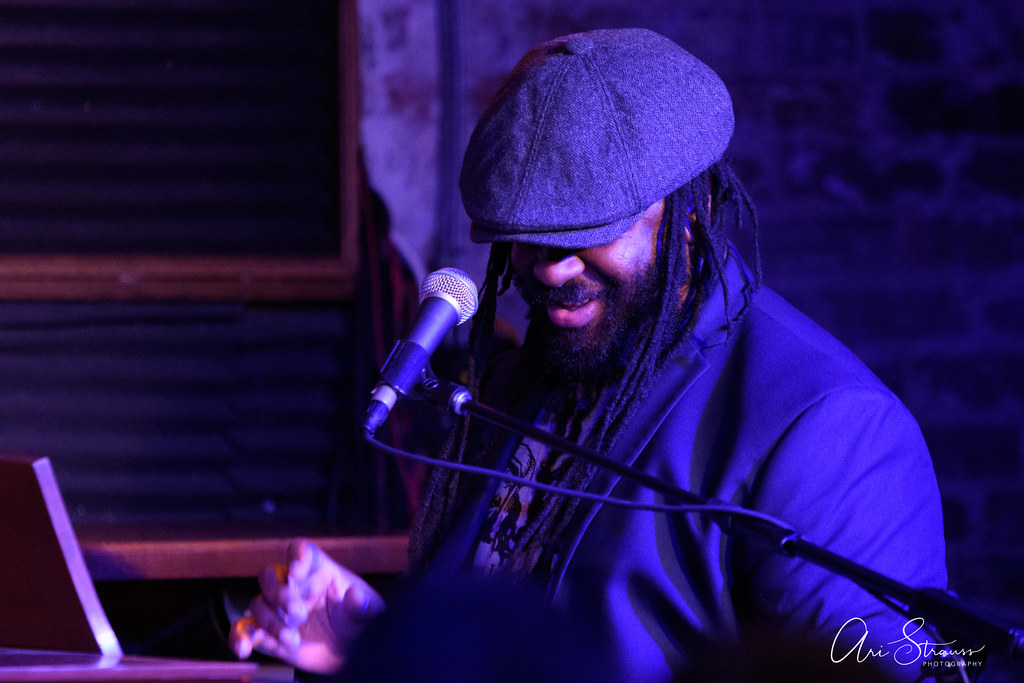