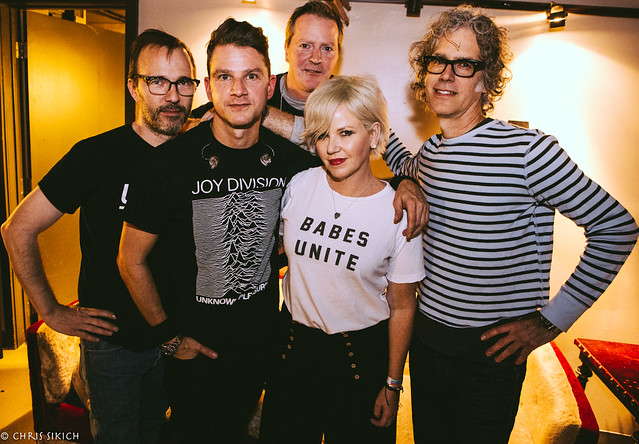 Power pop quintet Letters to Cleo came roaring back a few years ago with new music, and now Kay Hanley and company toast (or roast?) Christmas at Union Stage on Tuesday, Nov. 19!

On Friday, Nov. 15, Letters to Cleo release OK Christmas, a new EP, which includes three covers of “holiday classics” and cult favorites made famous by the Kinks (“Father Christmas”), Elvis (“If I Get Home on Christmas Day”), and the Dogmatics (“X Mas Time — Sure Don’t Feel Like It”) along with one original, “Miss You This Christmas.”

The band made a unanimous decision to take a subtle yet powerful stand against gun violence with this EP release, changing the “machine gun” lyrics in “Father Christmas” to “Can you melt down all the machine guns / so kids are safe on the streets.”

“The lyric change in Father Christmas was initially brought up by [guitarist] Greg [McKenna], after the mass shooting in El Paso,” Kay said. “I decided to turn to Twitter to ask the Kinks if they had any suggestions, which encouraged fans to chime in with ideas of their own. One Twitter follower, Eric Reiberg (@Eric_time) came up with the idea that I ultimately used to construct the new lyric.

Watch Letters to Cleo: Live at The Paradise on PBS to relive a recent performance by the band:

Formed in 1990 by Kay and Greg, Letters to Cleo perhaps remain best know for their breakout single “Here and Now,” which hit the charts in 1995 after the release of the band’s debut album, Aurora Gory Alice.

Watch the official music video for “Here and Now” on YouTube: