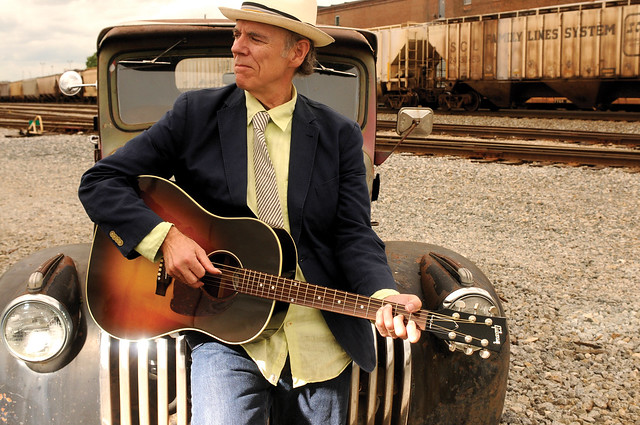 In a solo acoustic performance, John Hiatt used his substantial charm to engage the sold-out crowd at The Birchmere Tuesday. And, of course, the songs. John played songs that have been covered by Buddy Guy (“Feels Like Rain”), Bonnie Raitt (“Thing Called Love”), and I’m With Her (“Crossing Muddy Waters”).

Inspired by his partnership with The Goners, the Louisiana trio of guitarist Sonny Landreth and his rhythm section, John composed “Feels Like Rain” shortly after writing “Drive South.” John hooked up with The Goners after making his breakthrough album Bring the Family, which featured an all-star cast of musicians that included axe wizard Ry Cooder. When John was unable to afford taking those musicians on the road with him, Asleep at the Wheel frontman Roy Benson referred him to Sonny Landreth, “the other slide guitarist.” John made a sly comment about Roy’s inference that there were just slide guitarists.

Sonny and the Goners played on John’s 1988 album, Bring the Family. Together, they “toured the crap out of that album.” On the road for 15 months, John joked that his family forgot who he was.

While John didn’t discuss the background to “Crossing Muddy Waters,” the context for the song is well known. It addresses the suicide of his first wife, the mother of his first child, singer-songwriter Lilly Hiatt.

Armed with his acoustic guitar and harmonica at The Birchmere on Nov. 12, John opened the proceedings with “Real Fine Love.” He dedicated it to Tom and Sandy, who met at his show in 2004 and were celebrating their eighth wedding anniversary. Before “The Open Road,” John remarked on how he forgets that “there is a lot of people in this room.” He exclaimed, “It’s a Tuesday, for Christ’s sake!” While this was not his first sold-out at The Birchmere, John still seemed genuinely flattered by the turnout.

After “Lift Up Every Stone,” John talked about getting back on Facebook. He likes to use the social networking site to connect with fans and hear their stories. Plus, his wife and daughters are on the site, though his son is not. “I got hooked up with the Instagram,” he added, but “I just don’t know how that works.”

John whistled his way through “Perfectly Good Guitar,” a condemnation of the guitar-smashing antics of some rock stars. Then he opened up about goings-on in his life, telling the audience that he and his wife moved recently. His wife of 33 years, he said, planned the move to take place while he was on the road.

During the move, she called John, frantic about how things were going. She knew, he said with a practiced halt to his speech, that he wouldn’t be there “to tell the guys to move the boxes. That’s what I’d do.” He then deadpanned that he is really “a helpful guy. I’m a good guy.” Despite his wife’s concerns, the movers completed the job, leaving their new home crowded with boxes. Because of the mess, he told his kids that he wouldn’t be having them over for Thanksgiving this year; he told them to go eat with their friends.

John turned to his most recent album, The Eclipse sessions, playing “Aces Up Your Sleeve.” He recorded the album in August 2017, during the week of the eclipse, and released it a little more than a year later. John recalled the confused animals he saw around the time, describing the expression on a deer’s face as “What the fuck?” “Cry To Me,” released as a single in advance of the album, is “about a girl I used to know.”

In his previous appearance at The Birchmere, in August 2018, John celebrated the 30th anniversary of his album “Slow Turning.” On Tuesday, he played the title song and several other cuts from the album. He traded his guitar for the keyboard on “Is Anybody There?”, then went back to the guitar for “Tennessee Plates,” followed by “Icy Blue Heart.”

Two years into his second marriage, John wrote would become the lead-off track on Slow Turning, “Drive South.” He had just moved back to Tennessee, after spending “five years in Los Angeles one night. I was so thrilled to be back in Tennessee,” he explained, that “I wrote this little ditty.”

John played the title track from his 2005 album Master of Disaster, produced by the legendary Jim Dickinson. The North Mississippi Allstars, who include Jim’s sons Luther and Cody, served as John’s band for the album. John said that Jim was a good friend, and that he misses him. Jim, he said, is at “that big hoe-down in the sky.”

Turning again to Bring the Family, John completed his set with “Have a Little Faith in Me.” The crowd showed its appreciation with a standing ovation, and John spryly returned to the stage for an encore. He sent the crowd home with “Memphis In The Meantime,” a celebration of that’s culture and role in music history.

The Birchmere may have been packed to capacity, but John made the experience feel close and intimate. He has a genial, Midwestern way — he’s originally from Indiana. His cleverest songwriting is peppered with subtle humor, but his humor is always in an affectionate spirit, and his concert was a truly uplifting experience.

Experience John Hiatt for yourself and catch him on tour. Visit his website for more info!