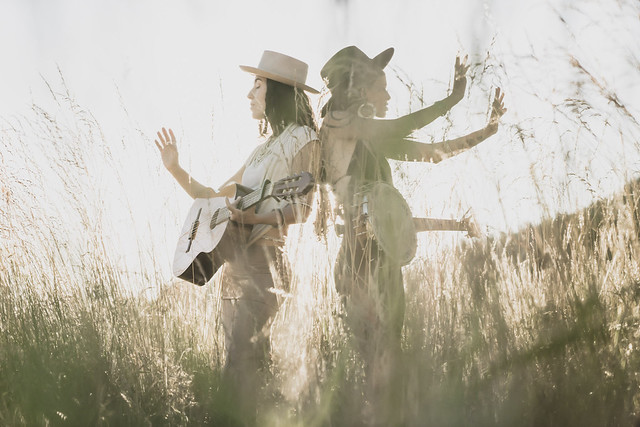 Rising Appalachia is a self-made success story. Sisters Leah and Chloe Smith — each world travelers for nearly two decades — merge multiple global music influences with their own Southern roots to create a unique world folk sound. The band has built a legion of listeners through relentless touring, tireless activism, and no small degree of stubborn independence.

After self-producing their first six albums, Leah and Chloe opted for the first time to team up with someone outside the band, legendary singer-songwriter/producer Joe Henry, to produce their seventh album, Leylines.

Parklife DC’s Ari Strauss emailed Chloe to ask about the new album and what is in store for the band’s upcoming show at The Hamilton Live on Wednesday, Nov. 20.

Ari Strauss: You’ll perform in DC soon at The Hamilton. What can we expect from the show and how will it differ from your last two DC appearances at the 9:30 Club?

Chloe Smith: We have always loved performing in the diverse and thriving city of DC. Some magic and flavor is always in the air at our more urban shows that I believe we all thrive on. Being from Atlanta, there is a camaraderie between cities. This years show will feature our new 6 piece band, which we have never brought to DC before, as well as songs from our new album Leylines. It’s been thrilling and creatively rich to perform these songs.

Listen to Leylines by Rising Appalichia on Spotify:

AS: Throughout its existence, Rising Appalachia has maintained its independence from the mainstream music industry. Your first six albums were self-produced. For Leylines, you opted to bring in multi-Grammy Award-winner Joe Henry to produce the album. What influenced your decision to bring in someone from outside the band to produce and how did you come across Joe?

CS: For the first time, we wanted to stretch and try out a producer. Someone with a poetic and creative mind themselves to nudge us in the studio and help us craft not only a recording experience but a body of work that sounded raw and “in the room”. We interviewed a few rather amazing folks that our manager brought to the table, and after one conversation with Joe we knew we had found our producer. He is mysterious, deeply poetic, and not heavy handed in terms of his producing style. We felt he would steer in a good way, and that is precisely what happened. Additionally, we rocked suits and fedoras in the room…. which brought the spirit of celebration and swagger out for each of us!

AS: What are some examples of how Joe’s involvement influenced the creative direction of the album? I understand Leylines is your first album not recorded in the South. Instead, you brought the band to live together for 10 days in a castle-like studio in Marin County, CA, to cut the album. Was that Joe’s influence or did you make that decision on your own?

CS: Most of Joe’s work was encouraging us to either keep a track or give it another go. That can be a hard decision for musicians because you are too close to the music, so having someone listen from more of a bird’s eye viewpoint IN the studio is invaluable. Its like a painter stepping back from their work to see which colors pop and what needs to be brought to the foreground. Leah and I picked the actual studio because it fit the rustic DIY style that we love and had a texture and creative pulse to it. The building was originally a gentleman’s house that he built from old pier wood and scrap stone from San Francisco in a bunker-like manner. Once the studio folks invested in the building they knocked out some walls and put in these amazing huge windows overlooking the pacific ocean… which drew us to the place. Nature is our number one muse, so its always been important for us to avoid the “basement” studios that feel too cavernous and dark for the light and air of harmony to usher in.

AS: You have some special guests on Leylines such as Ani DiFranco, songwriter Trevor Hall, and jazz trumpeter Maurice Turner. What was it like working with these artists? What did each contribute from their individual musical background to the album’s concept?

CS: Well, first off, having Ani Difranco on the album is still a breathtaking dream. She is one of our ultimate sheroes and it was a long time coming to meet her and collaborate somehow. As a pioneer in the music industry, she has influenced both our songwriting as well as our business structure in terms of maintaining ownership of all our material and learning the ropes ourselves. “Speak Out” is a political driven song that I wrote after the protests in Charlottesville, VA, and having Ani’s harmonies on that track is nothing short of wondrous for us. Trevor Hall and Maurice are both good friends with sultry subtle musicianship that we wanted to highlight as well on Leylines. Trevor’s voice is one of our favorites in our contemporary circles, and Maurices has recorded his infectious trumpet on every single one of our albums. That’s been a tradition for many years.

AS: Can you tell us about the inspiration for the last song on Leylines, “Resilience”, and the #IamResiliant movement?

CS: I wrote “Resilient” between Standing Rock and the election. That was a heavy time for many of us. We performed at and witnessed the power of the Standing Rock movement first hand after being invited to play at an all women’s concert at the center fire of the main camp. I was touched and incredibly moved by the indigenous leadership and cultural backbone of the native peoples there and worldwide who dove in and sacrificed so much to fight that pipeline.

The world resilient came to mind one day when I was seeing myself and so many people being bent and broken in hard times, but also somehow mustering the strength to stand up for their communities and keep coming to the table, again and again and again. That has always been the way of change. To not bow down. To show up when it’s hard and listen. Resilience shows up in our individual lives in small ways every day, and reaches out to a broader spectrum in community. The song has taken its own path and it’s a beautiful thing to witness.

Rising Appalachia performs at The Hamilton Live on Wednesday, Nov. 20!