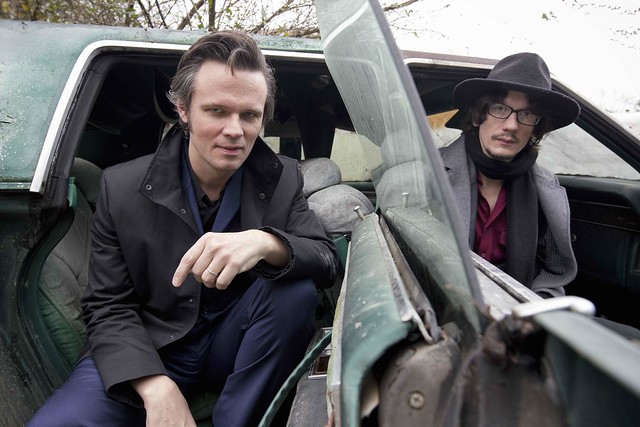 “World boogie” came to the District recently. That’s the term the North Mississippi Allstars use for their Hill Country blues-based, hard-rocking, seriously funky style. For some three hours, the NMA jammed out in front of a packed house at The Hamilton. Based in tradition but looking to the future, the NMA showed the audience just what is possible when creative, forward-looking artists put their spin on roots music.

Brothers Luther (guitar) and Cody (drums) Dickinson make up the core of the trio, which recently added a new bassist, Jessie Williams. Second-generation musicians, Luther and Cody are the sons of Jim Dickinson. Jim worked as a session pianist for the Rolling Stones and Bob Dylan and produced Ry Cooder, the Replacements, and Alex Chilton, in addition to recording as a solo artist and with various groups. Luther and Cody were born in Memphis, and Jim moved the family to north Mississippi while they were young. There, they grew up steeped in the Hill Country blues, learning from masters like R.L. Burnside, Junior Kimbrough, and Otha Turner.

Luther opened the show with a little solo work, playing Junior Kimbrough’s “Lonesome Road.” When Luther finished playing, I turned to another fan and commented on how beautifully he plays. “The tone!” he exclaimed. The Black Crowes, among others, have called on Luther’s exceptional guitar skills.

Earlier this year, NMA released a new album, Up and Rolling. Luther talked about the 16-page album book, which features photos taken by Wyatt McSpadden. On one day in 1996, the Dickinson brothers showed the photographer around their home region. The brothers took him to Junior’s juke joint and Otha’s home; their presence set the bluesmen, who tended not to trust photographers, at ease.

Stream Up and Rolling by the North Mississippi Allstars on Spotify:

Another blues classic came next: Peter Clayton’s “I Got to Find My Baby.” Luther changed gears, sending one “out to John Fahey and Jack Rose, a great guitar player of our generation who passed way too young.” Luther continued, “It’s funny, our dad was a great musician and had a hip record collection.” Jim tried to persuade Luther to give Fahey a chance, but it wasn’t until he discovered Jack Rose’s cover of him that he realized how special Fahey was. By that time, however, Jim had passed away. But as, Luther said, garnering applause, music “transcends time and space,” and it allows us to “commune with our loved ones who have passed.”

Men like Casey Jones and John Henry, Luther told the audience, attained legendary status through folk songs. So Luther decided to write folk songs about his heroes. For the last number of his introductory solo set, he played one about Junior Kimbrough.

When Luther said he’d back in just a few minutes, he wasn’t kidding. Soon, NMA was onstage, getting into the deep grooves of “Goin’ Down South,” off their debut record, Shake Hands With Shorty. They slowed it down with the title cut of their latest album, “Up and Rolling.” The next one went out “to Miss Mavis Staples, who’s still marching on that Freedom Highway.” NMA revved up the gospel classic “What You Gonna Do?”, originally recorded by the Staples Singers in 1965, and went directly into their rendition of the traditional “Hush, Hush, Somebody’s Calling My Name.”

“We got the mosh pit going in here,” said Luther, and the band kicked into “Mean Old Word.” He introduced “a Memphis classic, back by popular demand,” Johnny Cash’s “Bad News.” As the song wound down, he exclaimed “Jerry ‘The King’ Lawer,” referencing the Memphis wrestling legend who went on to become a color commentator for WWE. “Eat your heart out, Widespread Panic!” he declared.

After “Need to Be Free” Cody stepped out from behind the drum kit to play the washboard. As he got going, Luther took over on the drums. Luther joked about how band’s equipment van is the “grimiest, dirtiest, most conspicuous” vehicle, yet it just “rolled right in” to D.C. in the face of law enforcement. The band played “Peaches,” and then Cody and Jessie took a break, leaving Luther alone on stage.

Luther played “Hurry Up Sunrise,” which was recorded as a duet with Lucinda Williams on Electric Blue Watermelon. Luther and Cody have also worked with John Hiatt, backing him up on his album Master of Disaster. This spring, Luther released a side-project, Sisters of the Strawberry Moon, which featured a number of female roots music artists: Amy LaVere, Shardé Thomas, Alison Russell, and Amy Helm.

Luther played “Yard Man” and the band came back, jumping into “K.C. Jones (On The Road Again).” “Mean Ol’ Wind Down Died” had a call-and-response between Luther and the rest of the band. Luther pleaded “Lord Have Mercy,” then gave instructions to “Meet Me In The City.” They got down on “Shake (Yo Mama).”

The brothers traded instruments as Cody sang lead vocals on “Deep Ellum” and “Going Down The Road Feeling Bad.” They swapped back, and Luther explained that the next song, “Drunk Outside,” was “about driving around in Mississippi.” They used to have a friend, he said, who’d show up early on Sunday mornings, knocking on their door, waking up them and their girlfriends.

Introducing “Stayed Up All Night (Let Me In),” Luther recalled the brothers first show in DC, opening for T-Model Ford at the Black Cat. They wound up their set with “Prayer for Peace,” dedicated to the “living king of the blues, Buddy Guy,” and “Shake ’Em On Down,” bringing the set full circle, back to Shake Hands With Shorty.

As we waited for NMA to return for their encore, someone near me shouted, “Six more songs!” We didn’t get six more, but the three songs that NMA played went for a solid 20 minutes. In no uncertain terms, “Bump That Mother” expresses opposition to the Mississippi state flag, which contains the Confederate stars and bars. NMA sent the audience home with a pair of blues standards, Otha Turner’s “Station Blues” and R.L. Burnside’s “Po Black Maddie.”

Music is in the blood of NMA, and their soul is full of the Hill Country blues. “World boogie” is Southern rock for the 21st Century, virtuoso musicianship that that redefines a heritage for the contemporary world. And it’s guaranteed to put a smile on your face and make you wanna dance.