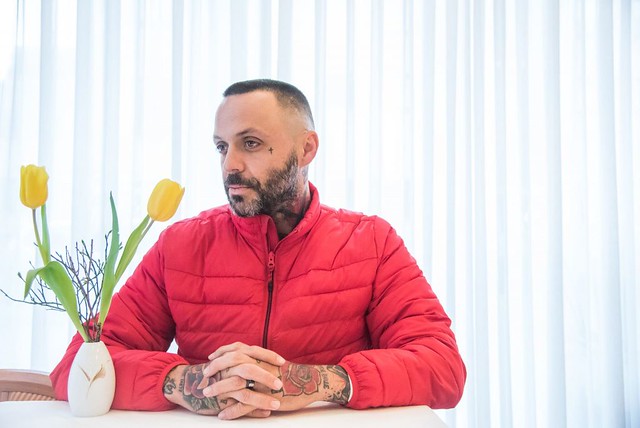 I had the pleasure of seeing Blue October for the second time this year recently. Justin Furstenfeld and company made a stop in Baltimore at one of my personal favorite venues — Baltimore Soundstage — as they finished the last few dates of their current tour.

After the show on Nov. 14, the one thing that I keep thinking about is how I’ve felt during and after experiencing Blue October. It’s pretty normal to feel *good* after seeing an amazing concert (I did after both). This feeling is more complex than that, however, and I am not exactly sure how to describe it. It’s some sort of mix of happiness, contentment, hope, and inspiration. You wouldn’t think that a band whose best-known songs (songs like “Hate Me” and “Into the Ocean from 2006 breakthrough album Foiled) talk about suicide, hate, and failure would inspire feelings of hope and happiness — and yet, they do.

I think this is in large part due to frontman Justin’s transformation and life changes — something that he talks about openly in the songs and throughout the performances.

As dark as times may have been in life, we have to remember to play the tape back and remember where we came from. It’s not about dwelling on the past or the mistakes, but rather keeping them in your memory and appreciating how far you’ve come. I’ve never heard or seen a band that expresses this better than Blue October. That is what Justin and the band are about. That is what their songs represent. It’s not hard to see and feel the joy that Justin is living with; to see how far he’s come.

You can experience that journey on Blue October’s latest album, I Hope You’re Happy, released in 2018 via Up/Down and Brando Records.

Stream I Hope You’re Happy by Blue October on Spotify:

As was the case in the first performance I saw, Justin once again mentioned his wife by name and called her beautiful. How often do you hear lead singers of rock bands talking about their wives on stage, let alone one with Justin’s history? He also told the crowd how much he loved *us* numerous times throughout the night, even going so far as to joke that he would make out with us but can’t because he’s married.

This wasn’t a band saying “I love you” to the crowd because it’s the thing to do. No, this is a man who truly loves those in his life who have supported him and been with him through the good and the bad. When he expressed his feelings, it felt like he really meant it, and those who know his story know that he did. The fans have been there for him, cheering him on and encouraging him. We often think of musicians helping fans with their music. In this case, the help has been mutual.

Musically and artistically, the concert was fantastic. The Blue October played together so well and sounded good live. Justin’s unique vocals translated well into a live setting. They played a mix of new songs and old songs — including some really old songs that drove the fans wild. They also mentioned they are currently recording a new album, which is very exciting. It’s exciting not only because it means new music, but because it means they are going strong.

Blue October is in an age range where it seems bands become more likely to decide to call it quits, slow down, or even worse, start making bad music. They haven’t done that and show no signs of doing so. I cannot wait until they go on tour again in 2020. Take a listen to their most recent album above. If you really want to get an idea of the transformation Justin has undergone, listen to the new album and then check out some of their older work. I highly encourage you to go see Blue October if you get an opportunity.