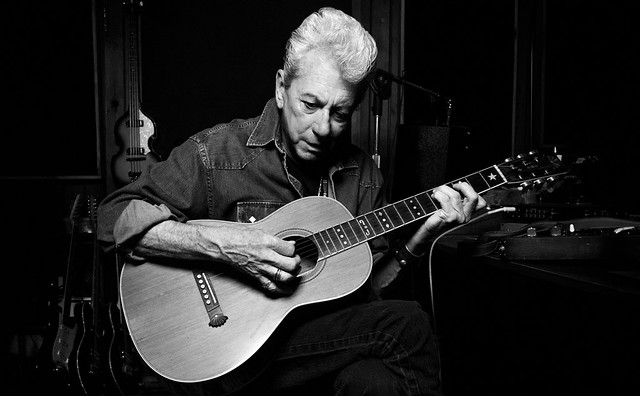 Joe Ely of The Flatlanders (Photo by Barbara FG)

I could start by talking about the importance and influence of The Flatlanders. But I’d rather begin on a personal note. In 2004, I attended the Austin City Limits Festival. The third day of the festival, I think it was late afternoon, I was walking between stages when a performer grabbed my attention. That was Joe Ely, who makes up The Flatlanders with Jimmie Dale Gilmore and Butch Hancock.

Coming of age in the ’90s, I had a certain conception of what country music was: the pop country of Garth Brooks and Shania Twain. In the hour or so I Joe perform, I came to realize that there was a lot more to country music. Over time, I realized that music I’d been introduced to as “folk” on my local public radio was, in fact, Americana, a sub-genre of country music. After Joe opened my eyes, I was on my way to discovering not only Americana, but progressive, Outlaw, and alt-country.

The Flatlanders have, as Jimmie Dale said, been playing for together for “about a hundred years.” They released an album in 1972, but sales were weak, and that was that for The Flatlanders. Joe went on to open for The Clash, Jimmie Dale emerged as a solo artist in the late ’80s and early ’90s, and Butch went on to write hundreds upon hundreds of songs, which have been covered by Emmylou Harris, among others.

In 1990, that 1972 album was re-released as More a Legend Than a Band. In the years that followed, the excitement created by that release would lead to reunion tours and further recordings. But even before that re-release, The Flatlanders exercised an influence that far outstripped their commercial success, shaping not only the Texas music scene, but a diverse range of artists from The Mavericks to Ryan Adams to Neko Case. In his last appearance in the area, Joe shared the stage with distinguished singer-songwriter Alejandro Escovedo, who spoke of Joe’s mentorship of himself and others in the Austin music community.

The Flatlanders take their name from their hometown origins in the dusty plains of West Texas. They grew up in and around Lubbock, listening to fellow native Buddy Holly, Mexican music, and Bob Dylan.

On top of this, The Flatlanders mixed in heavy doses of both Eastern and Western philosophy. Butch recalled how the song “Just the Wave” came to him in a dream. In the dream, he heard the song, sung by Jimmie Dale, being played on a tape recorder. Butch awoke from the dream with the song still incomplete, so he went back to sleep. Returning to his dream, he asked the man with the tape recorder to hit rewind, and he listened to the song from the beginning. This led Butch to wax about dreams within dreams and skepticism about our knowledge of the world.

Jimmie Dale took up the conversation, citing Bertrand Russell that there’s “no way to prove that the universe was created five minutes, complete with memories.” He continued, saying, “Some people are disturbed by that. Others are comforted.” Jimmie Dale counts himself among the latter.

But don’t get the impression this was a totally cerebral affair. “Pay the Alligator” came about because of a misheard statement about a radiator. “Doesn’t that sound like an old saying?” Jimmie Dale asked. “Or a football team slogan,” added one of the others.

Though they grew up in a deeply conservative part of the Lone Star State, they’ve always been politically progressive. They titled this the “Borderless Love Tour,” after a song from their 2009 album, Hills and Valleys. Though the song was written well before President Trump took office, its message remains timely: “There is no need for a wall.”

Stream Hills and Valleys by The Flatlanders on Spotify:

The Flatlanders have a sparse, elegant approach to instrumentation. It’s just guitars, electric and acoustic, and occasionally Butch’s harmonica, yet there’s still plenty of variety. There’s twang, there’s bluesiness, there are melodies that probably lead back to Spain.

“Dallas,” one of the songs from the band’s debut, opened the show. One of their most popular songs, it begins “Have you ever seen Dallas from a DC9 at night?” Curiously, as the book The Flatlanders: Now Is Again details, none of them had over been to Dallas when they wrote the song. Perhaps that is what makes the song work: The lyrics capture the complexity of all big cities, both the positive and the negative.

Exchanging verses, they traded the lead on “Baby Do You Love Me Still?” Joe explained how a conversation they had about their parents’ experiences in the Dust Bowl led to the writing of “Homeland Refugee.” An article about a man who’d moved out to California, and how “it didn’t work out well for him,” inspired them to write a song about Reverse migration.

Butch took lead vocals on “Julia,” and it was Joe’s turn on “Shadow of the Moon.” Butch and Joe added “ooo” to the background “Keeper of the Mountain” doo wop-style. Both songs evoked gorgeous natural imagery, one of nighttime, one of day. This led to “another road song,” the aptly-named “Thank God for the Road.” After going away, the trio came to the only cover of the night, fellow Texan Townes Van Zandt’s “Snowin’ on Raton.” Introducing the song, Jimmie talked about driving through Trinidad, Colorado, near the Raton Pass, with his family as childhood. His mother chided him for hanging out of the window, worried he’d fall out of the car.

When they finished singing “Right Where I Belong,” one of them said he was “not looking forward to that four hundred-mile drive,” and another chimed in, “Neither is Todd, our driver.” The set, which also included “Wishin’ for a Rainbow” and ended with “If You Were A Bluebird,” was loose and free-flowing. As one of The Flatlanders quipped, “We have a list, but we don’t follow it.”

A standing ovation brought The Flatlanders back for an encore. They played “See the Way,” and gave the story behind it. Butch and Jimmie Dale, who were living in separate cities wrote the song together over a period that stretched more than a decade. Finishing the evening with “Wishin’ for You,” they received another standing ovation.

Hear more music from The Flatlanders on the band’s website.