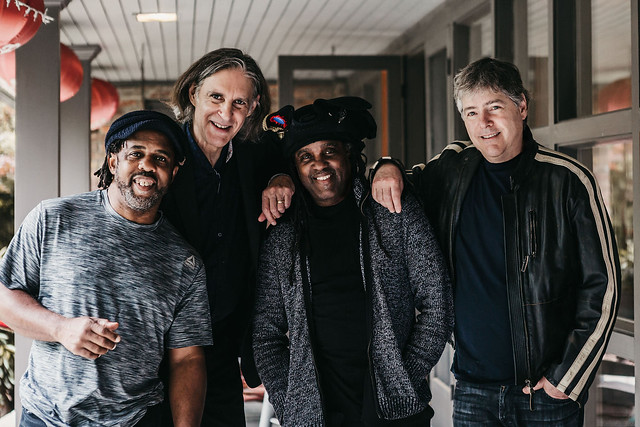 Béla Fleck and The Flecktones (Photo courtesy the artist)

In 1988, groundbreaking banjoist Béla Fleck was asked to put together his “dream band” for the Lonesome Pine Specials television series. The resulting band was The Flecktones, and they launched their first official tour a year later. Now, Bela Fleck and The Flecktones mark their 30th anniversary at the Strathmore Music Center on Monday, Dec. 2.

Over the past 30 years, The Flecktones achieved overwhelming critical acclaim, praised for their prodigious improvisatory skills and genre-bending meld of bluegrass, jazz, rock, and more. In celebration of the band’s 30th anniversary, Béla reunites the original lineup for a very special tour. Pianist/harmonica player Howard Levy is back in the fold along with bassist Victor Wooten, and percussionist/drumitarist Roy “Futureman” Wooten.

As noted by David Nowels for Americana Highways, Béla Fleck and The Flecktones have a new release, Rocket Science, on eOne Records. But the show this year is all about the classic magic.

“Whether it’s Victor Wooten’s simply breathtaking bass playing, or Futureman’s ability to play a standard kit all while handling his trademark Drumitar, the Wooten Brothers are simply out of this world as far as talent goes. Levy’s ability to blend piano and harmonica all while pushing the band’s musical boundaries is sublime. Lastly, Fleck’s talents are the key ingredient here and the one that drives everything home. Innovative and unique, Fleck continues to be an inspiration on the banjo, song composition and the blending of genres,” Nowels wrote.