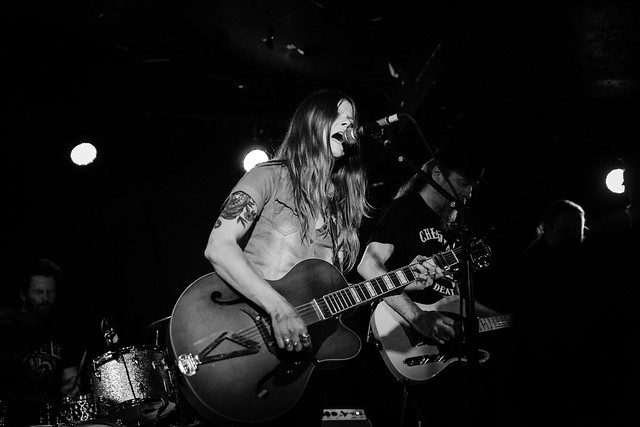 Chicago’s Bloodshot Records made its bones on a style of alt-country that mixes roots music and punk. While they hail from North Carolina, Sarah Shook & the Disarmers embody this rugged Windy City sound. Sarah’s clever songwriting reworks classic country themes and images with a 21st Century perspective, while her band backs her up hard and fast. Even at the last show of their last tour of the year, they played with energy, thrilling the packed Pearl Street Warehouse recently.

Sarah formed the Disarmers in 2015 after working with a couple other backing bands. They independently released their first album, Sidelong, which was re-released by Bloodshot in 2017. The next year, they issued Years. On Nov. 23 at Pearl Street, her guitarist said that, in the three-month layoff they have between tours, they plan to work on their next album. They played two new songs, one of which was about the Devil.

For a band that rocked this hard, Sarah’s lyrics revealed a lot of vulnerability. In her opening number, “Heal Me,” she sang about “a wound so deep inside me my whole lifetime / ain’t enough time / to heal me.” “Fuck Up” dealt openly with her struggles with drugs and alcohol (on Saturday, none of the band members drank during the performance). Even in the face of adversity, she displayed wit and humor: “I need this shit like I need another hole in my head,” she sang in “New Ways to Fail.”

Stream Years by Sarah Shook & the Disarmers on Spotify:

Her songwriting even bent toward the literary. “No Name,” which the band played in their encore, was influenced by Cormac McCarthy’s Western novel Blood Meridian.

Most of Sarah’s songs had a bleakness to them. Some, like “Good As Gold,” examined loss and heartbreak, modern twists on the classic stuff of country music. She described “Keep the Home Fires Burnin’” as “one of the only happy, hopeful” numbers in her repertoire. Her songs also tended to be heavy on the drinking, and she said that it was “nice to take a break from the boozin’.”

A fan shouted “I love you, Sarah!” during her set. Another audience member got Sarah to laugh when he shouted, “I have a well-adjusted level of affection for you!” “I appreciate that,” she replied, “that’s wholesome, man.”

Sarah has a distinctive point-of-view. As she discussed in a recent issue of No Depression, she was raised in a very religious household, and she was homeschooled. She was only allowed to listen to classical and Christian music growing up. Sarah, who has come out as bisexual, has broken with these origins. She promotes the work of other female and queer artists, and generally advocates for progressive attitudes.

Perhaps tired from the road, she said, “Touring is not glamorous. It’s not all star shit.” She then proceeded to describe a ratty motel in New Jersey that was overrun with feral cats. Someone in the audience suggested that was “just like bringing your pets on tour,” which Sarah answered with a sarcastic remark about the friendliness of the feral cats. (I guess feral cats aren’t friendly.)

The band draws a diverse audience: hardcore country traditionalists, tattooed punks, and fellow members of the queer community. These groups might not cross each other’s paths very often, but Sarah’s music provided an avenue for them to come together. It was a lively bunch; during “Road That Leads to You,” they hollered and cheered along with the song. They were definitely into the music, and everyone had a good time.