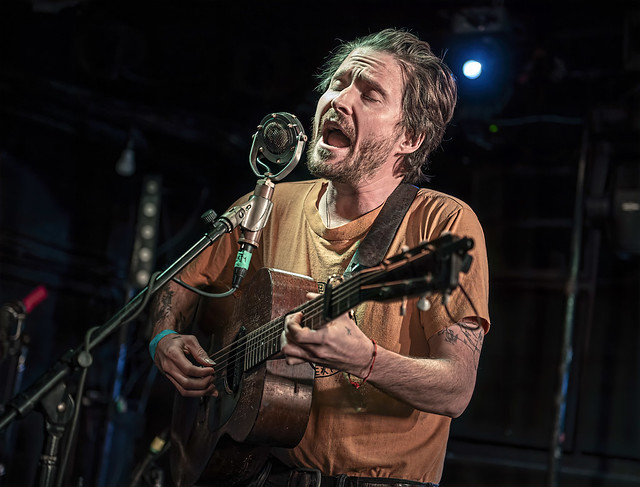 As someone who has called Florida, Colorado, New York, and most recently North Carolina “home,” it’s fitting that the music of Christopher Paul Stelling has a rambling, seat-of-the-pants feel that’s at once untethered and feels like coming home.

The rhythmic finger-picked chords of songs like “Destitute” or “Warm Enemy” is just the start as you hear that calling voice come over the horizon of notes. Until his last album, Itinerant Arias (Anti Records) Chris’s recordings have been mostly himself and guitar, but both on that LP and the forthcoming album, Best of Luck (due for release on Feb. 7th), he’s brought in a host of other instruments but that fiery delivery is still front and center.

I’ve had the fortune to see Christopher perform a few times, both with and without a band, but Saturday night opening for Son Little at the Rock and Roll Hotel it was just Christopher, his guitar, and sometimes both a guitar and kick drum or a stomp pad (more about that in just a moment). And he opened his set with a slew of new songs on the forthcoming album, some of which, has he mentioned, hadn’t been performed before. But even these new songs felt well-worn and familiar. Maybe it’s, as Stelling put it, traveling “coast to coast to coast” that makes these tunes feel lived-in but it’s a recipe for some great songwriting for sure.

Stelling has this deft finger-picking style that seems at once rooted in the folk tradition and in classical or Spanish flamenco guitar. But that combined with a stomp board with another piece that holds a tambourine or castanets created a rhythm that was hard not to fall into. And changing to a bass drum and hi-hat rig to play the recently released single, “Trouble Don’t Follow Me” (and now one of my favorite songs) Stelling was truly a one-man band. It was easy to be struck by the feeling that it’s got to be hard not to feel that smile come across your face when you hear it. And looking across the dance floor I could see my feeling validated.

At one point, Christopher told the audience that after crossing the country six times over the course of touring, he was looking forward to making breakfast in his own case iron skillet, but I think he was already doing some cooking that Saturday night as he played songs like “Hear Me Calling” with a double-time punk feel that changed on a dime to one that was hard not to want to clap to in the old gospel tradition and then back again. But my favorite lines came in “Made Up Your Mind” where he sang, “You already made up your mind about me. Maybe I can change. Maybe I can change. Maybe I can change… your mind.”

At the end of the set, Stelling played two older tunes — “Castle” and “Horse” — as someone in the crowd yelled, “You’ve got crazy fingers!” And even though this current tour is wrapping up, Christopher Paul Stelling will return to DC Feb. 13 to DC’S City Winery. Definitely a performance not to miss.

Here are more photos of Christopher Paul Stelling performing at the Rock & Roll Hotel on Nov. 30, 2019. All photos copyright and courtesy of David LaMason.