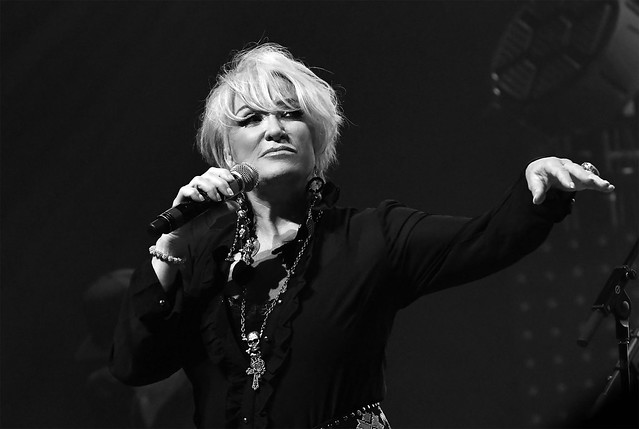 When Tanya Tucker got to “Bring My Flowers Now” at The Birchmere recently, her band left the stage, leaving just Tanya and her keyboard player. In her deep, rich voice, Tanya sang of her desire to receive flowers — and whatever else — “while I’m livin,” rather than at her funeral.

Tanya told the audience that the gorgeous song had been gestating for decades. When she finished singing it, she received a standing ovation.

Brandi Carlile helped Tanya, who doesn’t normally write, finish the song. (The brother team of Phil and Tom Hanseroth also assisted, and together with Brandi wrote all the songs except one on the album.)

Stream While I’m Livin’ by Tanya Tucker on Spotify:

Opening her set with “Some Kind of Trouble,” Tanya received thunderous applause when she greeted the crowd. At the end of “Ridin’ Out the Heartache,” she high-fived her fiddler, Jake. Later, she told the audience that he plays an astounding 38 instruments; he’s also, she said, “a great human being.”

During “If Your Heart Ain’t Busy Tonight,” Tanya asked for the reverb to be turned down. After the song, she told the audience about her busy day, which began with an appearance on CBS This Morning, followed by a photo shot. “They’re wasting a lot of film, if you ask me,” she said; she explained that she didn’t really see the need for more than one or two shots.”

“I love songwriters,” she told the audience, “they’re close to my heart.” Beth Nielsen Chapman wrote “Strong Enough to Bend” for her, and also provided background vocals when she recorded it for the 1988 album of the same name. She took the opportunity to introduce her background singer — her daughter, Chrissie.

Tanya burst onto the music as a young teenager in the early 1970s. “Delta Dawn,” she said, was the “first song I ever recorded. I never get tired of singing it.” She led into the song, which closed out her show, with the first verse of “Amazing Grace.”

After “Love Me Like You Used,” Tanya told the audience, “We’re going to go back to 1975.” She recounted the negotiations that took place when her contract was up with Columbia — and how her father, from their office in Little Rock, presided over a bidding war among the record companies. With a handshake deal in place with MCA, Tanya turned down higher offers, determined to keep her word.

MCA’s production differed from what Tanya had experienced previously. Cher was very popular at the time, so MCA got her producer to work with Tanya. She was using to coming in for the basic track. Doing an impression, she explained that Cher did not come to the studio for the basic track recording, which hurt the quality of her releases (Tanya suggested Cher was off-key).

At the age of 16, Tanya had big hits with “Lizzie and the Rain Man” and “The San Antonio Stroll.” For the latter, the band formed two rows and line danced briefly. Although “people come to hear my songs,” Tanya decided “we’re gonna go off the trail.” She conferred with the band, then lit into a medley of “I’m on Fire” and “Ring of Fire.” “God bless Johnny Cash and June Carter,” she said.

“The Farmer’s Daughter,” Tanya told the audience, was “written and performed by one of my biggest heroes. Referring to the great Merle Haggard, she added, “Miss you, Hag.”

Getting to material from the new album, Tanya sang “Hard Luck.” She told the audience she saw “High Ridin’ Heroes,” the only song on the new album not written by Brandi Carlile and the Hanseroth brothers, as a coming to full circle. On David Lynn Jones’s original recording, Waylon Jennings contributed vocals. When it was recorded for While I’m Livin’, his son Shooter, who also co-produced the album, played piano.

“Wheels of Laredo” was released as the first single from the latest record. “I think it’s kind of cute,” she said of the sassy “I Don’t Owe You Anything.” She also sang the album’s lead-off track, “Mustang Ridge.”

With “Texas,” Tanya gave a shout-out to her home state. She explained that, the next morning, she was flying to Seattle to participate in a show for Brandi Carlile. She’d be covering Brandi’s “That Wasn’t Me,” and wanted to practice the song in front of an audience.

“Two Sparrows in a Hurricane,” she explained, was her gift to her parents on their 50th anniversary. She mentioned that she lost her father on the morning of Thanksgiving in 2006, and her mother in 2012. “I’d like to hear my daddy’s voice more than ever now,” she said wistfully.

From the stage, Tanya signed a few mementos. She mentioned reuniting with old fans who always bring her flowers, and she expressed her gratitude for the love people have shown closer. The audience certainly showed the love with a rousing standing ovation at the end of the show. Tanya’s voice is still amazing; no one belts out country songs quite like her.