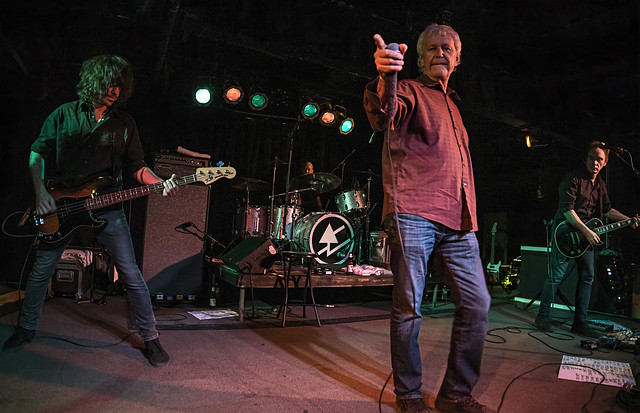 Guided by Voices performs at Black Cat on Dec. 7, 2019. (Photo by David LaMason)

There are things that are on almost everyone’s bucket list, but I submit here that among all the mountain sunrises, skinny dipping, and roller coaster rides there must be a space near the top for experiencing a Guided by Voices show. There’s nothing like it.

In a Guided by Voices show, there are rarely opening bands; the shortest performance is just under three hours (but three and a half is about average); and as the show progresses through the often 50- (sometimes 60-) plus song setlist so does the craziness of the audience. Drunken singalongs aside, though, it’s the music that’s the draw.

Off and on for the past 35 years, Robert Pollard has released, according to himself while at the Black Cat on Dec. 7, 108 albums. Since the time I’d seen them last year for the album Space Gun, Bob and company has released three more LPs (and one of them, Zeppelins Over China, being a double-LP). Since the 2016, the line up has remained the same with Doug Gillard on guitar, Kevin March on drums, Bobby Bare, Jr. on guitar, and Mark Shue on bass. And it has to be said that this is one of the hardest working and tightest bands I’ve seen.

As the line outside the Black Cat — which stretched from the door and down half the block by the time the doors opened — made it inside, and the band took the stage, there was a palpable feeling of community. Many of those who were there had seen the band the previous night in Philly and were ready for more.

Taking the stage and with few words, Guided by Voices started off with a few songs off the very recent LP, Sweating the Plague — “Downer” and “Street Party” (a clear favorite of both myself and the crowd) — as Mark and Bobby rocked out in one corner and Doug tore it up on the other side of the stage. And you know it’s a good show when every member of the band is grooving along with the audience as I saw Kevin smiling and nodding to the crowd.

Stream Sweating the Plague by Guided by Voices on Spotify:

And Bob was in fine form, high-fiving the crowd, spinning his microphone, and stirring things up the way only Uncle Bob can. The show Saturday was one of only five the band was playing in support of the new album, he told the crowd, but keep in mind this is also after coming back to the States after Guided by Voices first European tour in 15 years.

Certainly one of the best live bands out there, Guided by Voices plays one more show this year — a 100-song New Year’s Eve show in Los Angeles. Find more at here.

Here are more photos of Guided by Voices performing at the Black Cat on Dec. 7, 2019. All photos copyright and courtesy of David LaMason.