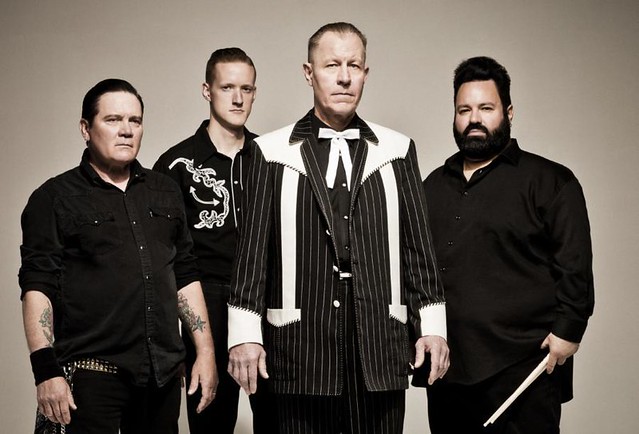 The Reverend Horton Heat brings the party to Black Cat on Sunday, Dec. 15, for Horton’s Holiday Hayride with holiday hijinks and some special guests!

Late last year, The Reverend Horton Heat released Whole New Life, a 12th studio album, via Victory Records. The Rev is touring the album through 2020, and release a video for the single “Perfect” a few months ago.

“There will never be another Roy Orbison,” said frontman/guitarist Jim Heath. “I’ve always thought he was the ultimate perfect singer. There’s a nod to his classic song ‘Pretty Woman’ in here, but this song is my own melody and guitar licks.”

As the first line in the song reads, ‘Perfection is not in the cards,’ Jim, along with bassist Jimbo Wallace accidentally fell into such an imperfect situation in the studio. Technical difficulties forced the band to re-record Wallace’s bass parts when Jim had an idea very unconventional to the Reverend Horton Heat rulebook. “I was thinking about getting Jimbo to play electric bass instead of upright, but he came up with the genius of playing an upright bass with a pick — and it worked out perfect (no pun intended)!”

Jim added: “Frankly, I think the song is kind of zany and psychotic, verging on ridiculous, but Reverend Horton Heat has always had a sense of humor. At the end of the day, it’s a love song. A somewhat psychotic, yet fun love song.”

Watch the official music video for “Perfect” by the Reverend Horton Heat on YouTube:

Call it a new twist on an old sound, Whole New Life was recorded between Fun Guy Studios and Modern Electric in the band’s hometown of Dallas. The 11-track rumination features new sticksman Arjuna “RJ” Contreras. The Texas-based jazz pupil came to the bands attention from a friend’s reference in the summer of 2017, and brought a whole new backbeat to the legendary rockabilly administration. After clicking with Jimbo, Jim hired a new pianist in 2018, Matt Jordan, to flesh out the sound with the pomp and power of Jerry Lee Lewis and Little Richard. “I love playing with these guys, it truly is a whole new band, so the title fits perfectly.”

The Reverend is bringing along the legendary Dave Alvin of The Blasters, California ska punks Voodoo Glow Skulls, and Japanese garage rockers The 5.6.7.8.’s.