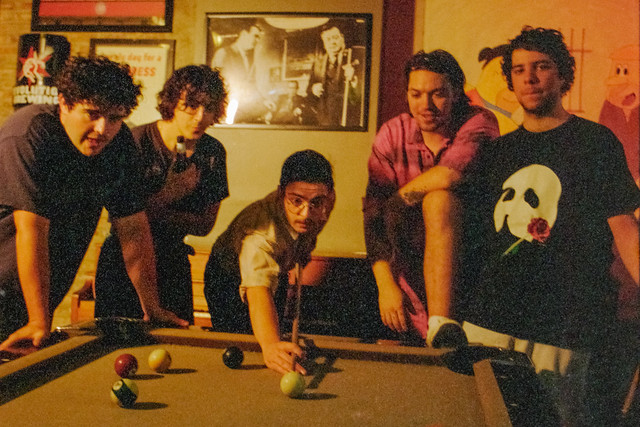 Given that this was the DC stop on a tour in support of their brand new album Lookout Low, I had set expectations accordingly that I may not be able to enjoy some of my favorites from past releases. While the tracklist on Lookout Low boasts a greater depth and more nuanced arrangements compared to previous material, Twin Peaks’ old tunes nonetheless have sharp teeth and raw energy which I find particularly enjoyable in my rock n’ roll.

Stream Twin Peaks’ setlist from their Dec. 11 show at Black Cat on Spotify:

I discovered quickly that my apprehension was unfounded, as Twin Peaks seamlessly navigated through a repertoire that was equally comprised of old and new songs. The lads did a fantastic job striking a pace that kept the crowd engaged, but not overwhelmed, sprinkling more soulful pieces like “Ferry Song” in between heavy hitters like “My Boys” and “Getting Better.”

As the night progressed on Dec. 11, the intensity increased exponentially. By the time Twin Peaks burst into the first chant chorus to “Walk to the One You Love,” the walls of Black Cat reverberated with hundreds of voices screaming along. Indeed, the last tune of their set (before a 2-song encore) devolved into a prolonged, chaotic jam session which included, among other things, a dueling guitar solo between the two leads who were simultaneously engaged in an emphatic, mountain goat-esque head butt battle.

Twin Peaks wasn’t there solely to play songs they’ve already performed thousands of times; they wanted to put on a workshop in live entertainment. I think I first noticed the two backup singers during the band’s atmospheric ballad “Tossing Tears.” Backup singers! Whether they were tour-hardened professionals, or just the bassist’s cousin’s girlfriend’s sisters looking for a fun trip across the country, these two ladies added an incredible element to the night. It made me feel like I was on the set of an Ed Sullivan airing, not a 700-cap club in the district.

It’s also not easy to keep continuity and flow when four of the five band members share in lead vocal duties throughout the course of the night; but Twin Peaks didn’t miss a beat, and the transitions throughout the set were obviously well-rehearsed.

In the quiet night air, as I was walking back to my car at the conclusion of the show, I could feel the post-gig crash begin to set in. A sudden end to intense auditory and visual stimuli is always a jarring calibration. But hey, nothing is forever, and I won’t let it get me down.