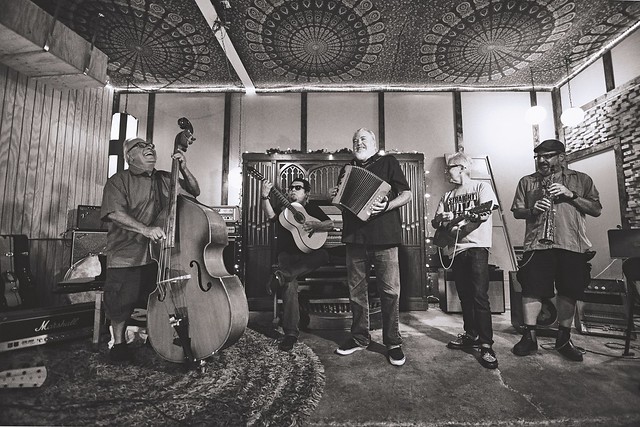 Touring behind their new holiday album, Llegó Navidad, Los Lobos played new tunes and old classics — with the band’s two sets covering territory from traditional Latin music to roots rock in a two-night stand at City Winery recently. They ended their show, as is their custom, with the Dead’s “Bertha,” which they introduced with the line “I’m gonna tell you how it’s gonna be,” from Buddy Holly’s “Not Fade Away.”

Acoustic except for the bass on Dec. 13 (the second of the two nights), Los Lobos opened their first set with the title cut of their 2010 album, Tin Can Trust, a record about hardworking survivors in lean times. The saxophonist switched from baritone to tenor sax for “Marciela.” Two songs from their 1984 breakout album, “Will the Wolf Survive” and “A Matter of Time” took a compassionate look at the lives of the undocumented.

Turning toward lighter material, the band played two songs from their new album,
“¿Dónde Está Santa Claus?” and traditional Puerto Rican “Reluciente Sol.” Finishing the latter, Cesar Rosas exclaimed, “We got through it! Wow!” Lead guitarist David Hidalgo explained they just recorded the album in March, so they’re still getting used to playing the songs. They did an admirable job later in the set when they introduced “Llego a Navidad” as well.

Following a Spanish ballad sung by Conrad Lozano, Los Lobos played the lovely “Saint Behind the Glass” from Kiko, the band’s 1992 album that many consider their best work. On the last song of the set, their duo of percussionists thrilled the crowd with a truly impressive drum solo.

After intermission, the band started their second set with “The Valley,” presumably about the heavily Hispanic San Fernando Valley to the north of the city of Los Angeles. “Shakin’ Shakin’ Shakes,” the next tune, came from the soundtrack to the 1987 movie La Bamba, for which Richie Valens’s widow personally requested the band perform the music. David got the audience clapping along to a celebration of “The Neighborhood.”

Before “Chuco,” a traditional cumbia, a member of the audience shouted “Crank it up!” Conrad asked, “You sure?” and warned, “You’ll be sorry!” For the next few songs, beginning with Arbolito, David traded his axe for an accordion. He told the audience that the great Hispanic country musician Freddy Fender (the only Latino with a #1 country hit single) wrote “Christmas in Texas.”

Louie dedicated “Kiko and the Lavender Moon” to Norah. After a Spanish tune, the band finished its second set with “Don’t Worry Baby.” When they returned for an encore, David mentioned that today is Louie’s 44th anniversary with his wife. With his phone, Louie took a shot of the audience cheering for her. “Christmas and You” went out the to the couple on their special day.

And, as they always do, the band ended the set jamming on the Grateful Dead’s “Bertha.” Jerry Garcia had a unique playing style, but David Hidalgo does a hell of a tribute to his playing. Los Lobos always use this as an opportunity to show off their chops, and they sound terrific.

Together for nearly 50 years, Los Lobos have long been one of America’s great bands. They have a distinctive sound, and their years of coming up hard playing weddings and parties gave them the skillset to command an audience. There’s a real emotional core to their music, a celebration of perseverance in the face of hardship, and of the joys of friendship and of community. From a rich historical tradition, Los Lobos make poignant contributions to the great conversation of rock ’n’ roll.