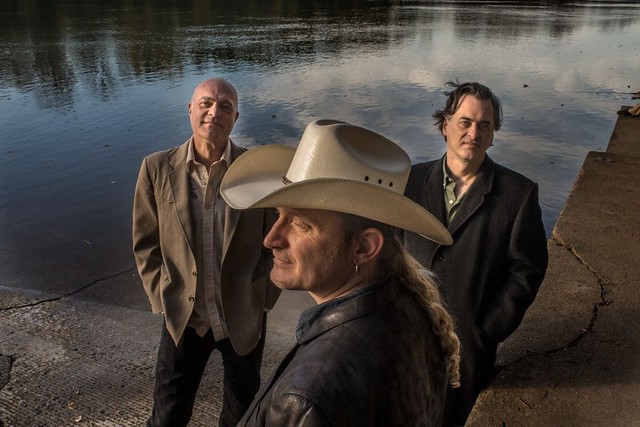 Last Train Home came together in DC in the late ‘90s, led by Eric Brace, who was then a reporter at the Washington Post. When the band took off, Eric left the Post to become a full-time musician.

After a hiatus, Last Train Home came home to The Birchmere recently.

Prior to the latest record by Last Train Home, Eric released an album, Riverland, with Peter Cooper, a fellow journalist and historian of country music who lectures at Vanderbilt, and Thomm Jutz, a native of Germany’s Black Forest who has toured as a guitarist for Nanci Griffith and others. The title of the album references the Mississippi River its surroundings; as Eric said at The Birchmere on Jan. 3, introducing a tune from the record, “it’s incredible how much of America flows in the Mississippi.”

If someone unfamiliar with LTH were told it’s a country band, they might find the band’s instrumentation surprising. While they have some of the traditional implements of country music in the mandolin and pedal steel, the band also includes horns. The presence of the saxophone lends a roots rock vibe to many of their songs, while the trumpet adds a novel, interesting flavor.

Given the description of “country,” one might not expect to hear songs in a foreign language, either. Eric’s forays into Spanish and French (and the attendant musical cultures) have contributed to some critics labeling the band “Americana.” During the second set, LTH played the bilingual “Et Maintenant/What Now My Love,” which contains lyrics in both English and French.

From the tracks that LTH played for their hometown crowd, “Sleepy Eyes” and “Flood Plains,” the new album promises to satisfy the group’s dedicated fans, who’ve only gotten a few EPs to scratch their itch in the last decade.

Eric provided Parklife with some notes on the songs, revealing “Sleepy Eyes” and “Flood Plains” are covers. Eric said, “I first heard this in the early aughts when Last Train Home played in Pennsylvania with a band called Frog Holler, a splendid combo fronted by songwriter Darren Schlappich. I wanted to record this from that first listen, and now we have. It’s of the best love songs to a place you’ll ever hear. Seek out Frog Holler, who are still at it with the same shambolic joy. You’ll love what you find.”

Of “Flood Plains,” Eric said, “We met Steve Wedemeyer while on tour of Germany in the fall of 2004. A rising singer-songwriter from Austin (via Houston), Steve’s debut album was out on Blue Buffalo, the German label that had also released our Bound Away record. His guitar playing was as stellar as his songwriting, and we asked him to move to Nashville and join the band. He did, and we recorded and toured together until he moved back to Texas in 2009. His spirit and sublime guitar work are all over our albums Last Good Kiss and Live at IOTA, and Steve’s song ‘Can’t Come Undone’ is on Last Good Kiss as well. I’ve always loved his song ‘Floodplains,’ and now I get to sing it. Thank you, Steve. We miss you!”

LTH pulled their show-opener, “Home for Christmas,” from their most recent recording, the 2017 Holiday Limited EP. After intermission, they mined the album “I Have My Love to Keep Me,” with “Christmas in St. Paul” a few numbers later.

In addition to the Buck Owens classic “Together Again, ” LTH also covered songs by less well-known artists. They introduced Luke Brindley of the Brindley brothers, who own Jammin’ Java and Union Stage, to perform his “Hudson River” with them. Later, they played a tune that Thomm wrote with Tammy Rogers of the bluegrass band The Steeldrivers.

LTH finished their second set with what Eric described as a “wild” cover, and they received a standing ovation as they left the stage. They returned for an encore, and the show ended with LTH playing “Feliz Navidad” as the disco ball lit up the venue. The evening’s set included a number of fan favorites, among them “Dogs On The East Side,” “Doughnut Girl,” and the title track of Time and Water.