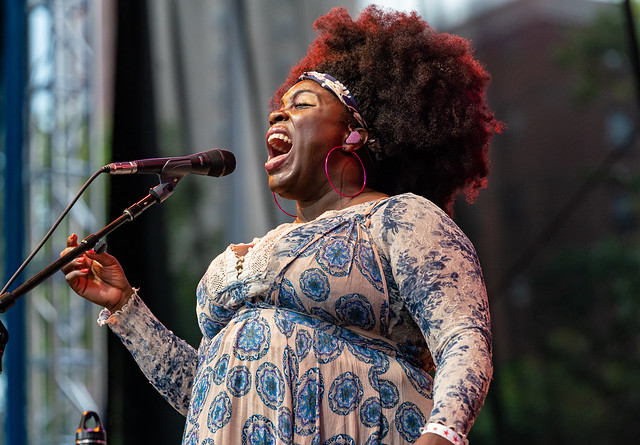 Several years ago, country-soul songwriter Yola was testing a Christmas gift that involved a live flame. Unbeknownst to her, the accelerant she used leaked onto her dress, and, when she went to light it, she caught fire.

To her surprise, Yola responded by breaking into laughter, as she realized she was bizarrely happy at this turn of events. That says a lot about where she was at the time, Yola told a sold-out 9:30 Club audience recently.

Fortunately for Yola, and for music lovers, the laughter shocked her into dropping to the floor and putting the fire out. On Jan. 10, she emphasized to the crowd at 9:30 Club that it’s important to “stop, drop, and roll,” should you ever find yourself aflame. She escaped the blaze without injuries, but the incident inspired the title track of her Grammy-nominated album, Walk Through Fire.

Yola opened her set with “Lonely the Night.” Introducing “Ride Out in the Country,” she said that video for song “makes me look a bit murdery.” “Shady Grove,” she said, is about “how much you give away” in your 20s. She added, “In your 20s, you’re amazing, but you don’t know you’re amazing.”

After “Rock Me Gently,” she asked, “Who in this room is in love?” Quoting Rihanna, she said “nothing but work.” As the title of her next song declared, “It Ain’t Easy.”

Stream Walk Through Fire by Yola on Spotify:

The setlist included more tracks from her album (“Love Is Light,” “I Don’t Wanna Lie), as well one from her 2016 EP (“What You Do”) and a tune by her producer, Dan Auerbach (“Stand by Your Girl”). Yola finished her set with Elton John’s “Goodbye Yellow Road,” which she told the audience she’d wanted to sing “since I was four years old.”

The sell-out crowd, which had a warm, enthusiastic vibe all night, chanted “Yola!” to bring her back to the stage. Inviting the crowd to sing along, Yola performed a medley of Joni Mitchell’s “Big Yellow Taxi” and Joe Cocker’s “The Letter.” Paying homage to Aretha, she ended with “You’re All I Need to Get By.”

There’s only one Aretha, but Yola is in the rare class of exceptional vocalists with the vocal power and beauty to come close.