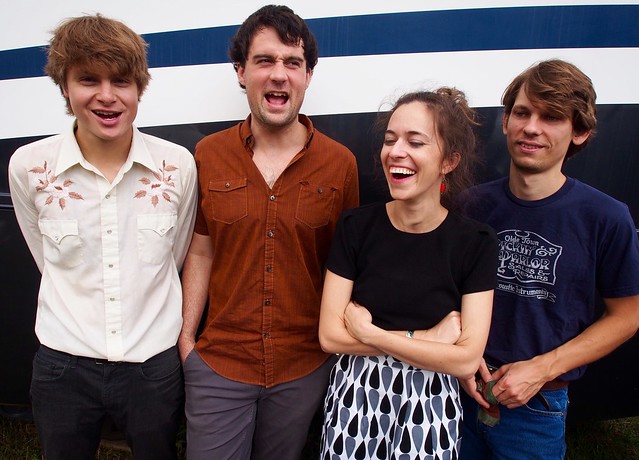 String band music is often equated, at least in contemporary America, with bluegrass, but this is far from the whole story. Bluegrass only emerged in the 1930s (at the earliest), while string music is much, much older. The term “old-time” is used to describe music with even deeper roots in the 19th century (and sometimes even further back in history). It is old-time music, with its connection to the more distant past and world folk music, that the instrumental quartet Hawktail plays.

That’s not say that bluegrass isn’t a part of what the band does. Their second piece of the evening on Feb. 6 at Songbyrd Music House was a dark, moody bluegrass number called “Last One on the Line.” And bluegrass is what most of the group is known for, really. Fiddler Brittany Haas played with the “chamber grass” group Crooked Still, and bassist Paul Kowert is a member of the Punch Brothers. (Along with guitarist Jordan Tice, both have also played in the folk/old-time band Dave Rawlings Machine.)

The fourth member of Hawktail is mandolinist Dominick Leslie. Dominick is the winner of several mandolin competitions, including the prestigious contest at MerleFest. He joined the group after their first album, Unless, had largely been written, and was more involved with writing the songs for the band’s second release — Formations, released on Jan. 10.

Stream Formations by Hawktail on Spotify:

The band’s connection to worldwide folk music was evident in their opening number, “Annbjørg,” inspired by the Norwegian fiddle master Annbjørg Lien. The tune explores the soundscapes of Scandinavian folk, revealing both similarities to and differences from American music.

Hawktail’s first two numbers were off Formations. The band had originally gone into the studio with a plan to record an EP of covers they’d been playing live on tour, but they found they had to material to fake a complete, original album.

The next two songs, “Abbzug” and “Randy” (the latter composed by Brittany) came from that first album, 2018’s Unless. Midway through their second set, Hawktail played the title track of that record.

Hawktail named their label after the next track: “Paddidle.” Intermission followed “Eddie’s Attic,” and the second set opened with “One Hour in Hungary,” a cover of the Swedish acoustic group Väsen.

The second set included songs from both the new (“Dandelion”) and old albums (“El Camino Part 2”). Introducing “Frog and Toad,” one of the men in the band talked about how it “transported me to a different place,” and how we wanted a name to match the feeling. During a walk with his sister, she asked him, “What are you going to call that frog song?”

To close the set, Hawktail played a medley leading into “The Tobaggonist.” Throughout the show, the quality of the musicianship was absolutely superb. The members of Hawktail were also quite friendly and engaging with the audience after the show.