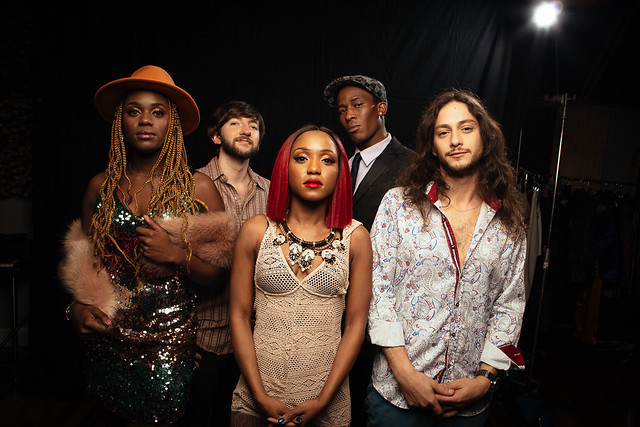 The sound of Memphis blues and soul shook the 9:30 Club recently when Southern Avenue opened for Galactic on the latter’s 25th anniversary tour. While the band takes its name from a street that runs from the east side to the “Soulsville” section of the city (the original home of the legendary label Stax Record), it has international origins.

Guitarist Ori Naftaly grew up in Tel Aviv, Israel, relocating to Memphis in 2013 to participate in the International Blues Competition. Reaching the semi-finals, he remained in the United States to form and tour with his own band.

Ori met vocalist and Memphis native Tierinii Jackson, who in turn introduced him to her sister, Tikyra, who plays the drums and sings backup in the band. Adding Evan Sarver on bass and Jeremy Powell on keyboards, they competed in the International Blues Competition, representing Memphis in 2016.

Since their appearance at the IBC, Southern Avenue has become the “most talked about band in Memphis.” This is certainly due in part to the energy they bring to the stage: They were a kinetic blur of blues fervor at 9:30 Club on Feb. 15. Tierinii, who never stops moving onstage, has a classic blues voice — low, sultry and powerful; a big voice.

Southern Avenue released its first, self-titled album in 2017, with the follow-up, Keep On, coming out two years later. They featured the latter album on Saturday night, opening with “Whiskey Love,” followed by “Switchup.” Later, they performed “Jive,” and they closed the set with the audience clapping along to the inspirational “Don’t Give Up.”

Stream Keep On by Southern Avenue on Spotify:

For the penultimate song, the band went with “Slipped, Tripped, and Fell in Love,” from their first record. They also went to their roots with a cover of the Queen of Soul’s “Rock Steady” that had the audience chanting the refrain.

If performances like this are the norm for Southern Avenue, they can expect to gain popularity, and to gain it quickly. “That was excellent!” exclaimed the woman next to me after they completed their set. Judging by the sound of the applause, she wasn’t alone in feeling that way.

For more music and tour dates from Southern Avenue, visit the band’s website.