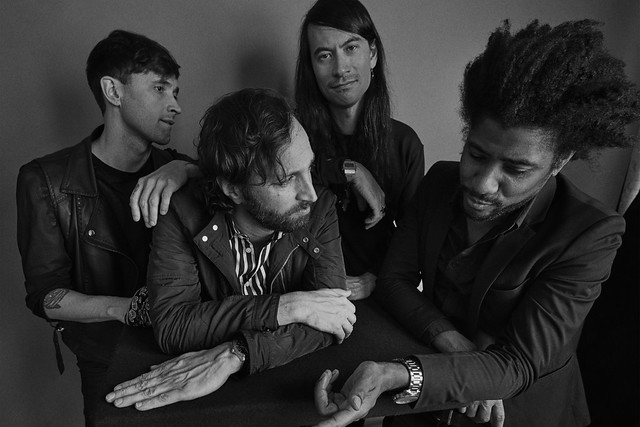 Post-punk meets gospel? You don’t need faith to believe, my friends, as we have the living proof with Atlanta quartet Algiers! Frontman Franklin James Fisher and company return to their favorite place to perform in DC, the Black Cat, on Thursday, March 12!

You can win a pair of tickets to see the show with Parklife DC.

On Jan. 17, Algiers released There Is No Year, the band’s third studio album, via Matador Records.

The mesmerizing visual for the sinuous, dub-inflected latest song “We Can’t Be Found,” which builds to a soaring, cascading chorus, propelled by powerhouse vocals, was directed by Ian Cone.

“I always feel the most successful music videos are the ones that are reflective and convey the mood of the song to the listener over everything else,” said Algiers guitarist Lee Tesche. “In this instance, we collaborated with the artist Lloyd Benjamin, trying to frame some of his sculpture work in a more abstracted way, referencing the urban dystopian cityscapes found in the German expressionist films of the 1930s. The result aspires to be somewhere in between the unsettling work of Darius Khondji and the set design of The Cabinet of Dr. Caligari or Fritz Lang’s Metropolis.”

Watch the official music video for “We Can’t Be Found” by Algiers on YouTube:

Parklife DC is giving away a pair of tickets to see Algiers at Black Cat on March 12! To win, simply leave a comment on this blog. You can leave any comment, but we would like to know your favorite song by Algiers.

Comments will be closed at 5pm on Monday, and a winner will be randomly selected. The winner will be notified by email. The winner must respond to our email within 24 hours, or they will forfeit their tickets and we will pick another winner. Good luck!