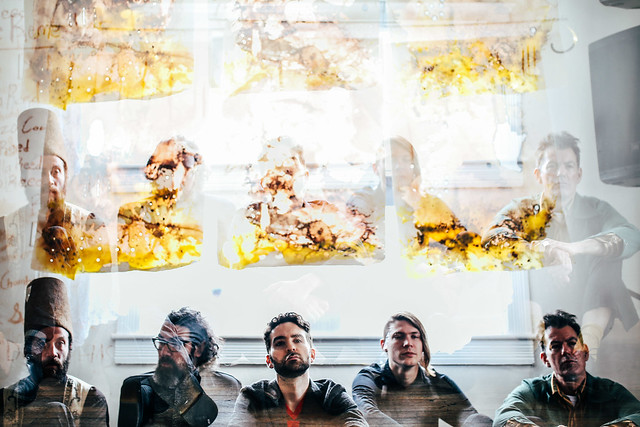 Time Is Fire barrels into the musical future on their new album, In Pieces, a blistering mix of pan-cultural rhythms, experimental noise, and consciousness-raising protest.

The debut LP (out Feb. 28 on Electric Cowbell/ Insect Fields) captures the band’s signature sound, which has been described as “Sufi punk,” “weird world,” and “punk mysticism,” but resists simplistic labels. Produced and recorded by Brendan Canty (Rites of Spring, Fugazi, Messthetics), the album’s nine tracks build on Time Is Fire’s incendiary live shows, which have won praise from critics at NPR, the Washington Post, Washington City Paper, and many other media outlets.

Beneath the record’s polyrhythmic beats and psychedelia is a potent message of resistance against authoritarian forces on the rise across the globe, from Tehran to DC.

“Our mission as a band is to snap people out of their fear,” says Kamyar Arsani, the band’s Iranian-born vocalist and lyricist. “The dance element is there to get people out of their seats and moving. And then the lyrics point toward new ways of thinking, feeling and changing our world.”

Just days ago, Time Is Fire released a video for the single “Poor Is Poor.”

Watch the official music video for “Poor Is Poor” by Time Is Fire on YouTube:

Born in Tehran, Arsani grew up studying classical Persian music while listening to Western rock, which, as he told the Washington Post, “had the same protest energy that I heard on the streets.”

Listen to the singles to date or preorder In Pieces by Time Is Fire on Bandcamp:

While it’s great to listen to Time Is Fire, you’re not getting the full picture unless you catch these electrifying poets live. See them next at their album release show at DC9 on Feb. 27!