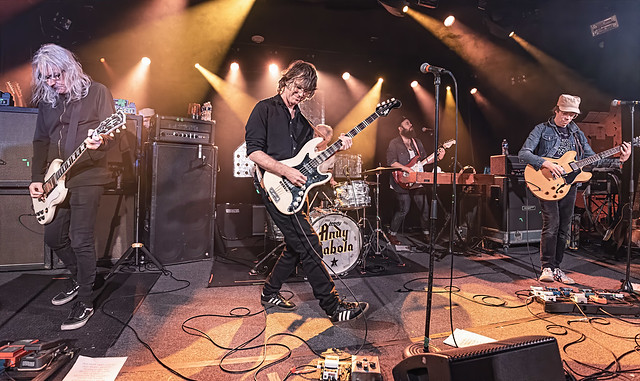 Okay. So, I admit that I’m a fan, so saying that Sloan is one of the best bands around and that next to the term “power pop” in any reputable encyclopedia are the names Chris Murphy, Patrick Pentland, Jay Ferguson, and Andrew Scott is a little biased on my part. Four songwriters and musicians who have been writing and performing for nearly 30 years and right on the heals of releasing their twelfth LP, aptly titled 12, the band is in the midst of celebrating the 20th anniversary of their fourth record, “Navy Blues,” with an extensive tour.

And Saturday night at the Union Stage the quartet rocked the roof off to an awestruck audience.

First, it has to be noted that when Sloan performs they come to impress. Lighting rig, band crew dressed in sailor outfits, a lit up “4” set up behind Andrew Scott’s classic drum kit — all touches that make a Sloan experience something special.

The band started their sets (yes, two full sets AND encore) with Navy Blues in full, starting with “She Says What She Means” with that groovy bass chunk beginning and flawless vocal harmonies. As each song on the list produced, the members switched singing lead — Murph for “She Says,” Jay for “C’mon, C’mon,” Patrick singing “Iggy and Angus,” and Andrew switching from drums to guitar and vocals for “Sinking Ships” while Jay switched to bass and Murph took over on drums. And joining the band was Gregory Macdonald who’s been taking over on keyboards, harmony vocals, maracas, and other odds and ends for the past few years.

During “Money City Maniacs,” a fan favorite, Patrick shredded, walking up to the edge of the stage as Murph got the crowd amped up and clapping as a flashing red light and siren got things started.

Having essentially opened for themselves, Sloan returned after a brief break to play a slew of favorites from their extensive catalog, starting off with “Flying High Again” with each member singing verses and then they flew right into “Who Taught You to Live Like That” from Never Hear The End of It with perfect harmonies.

The band played some of my personal favorites, including “Unkind” and “The Rest of My Life,” and during the set Murph noted that DC legend Ian Mackaye’s new band was performing across town and how as a fan had met Ian years ago and influenced himself and his bandmates.

Returning to the stage, Sloan finished their set with an encore, ending with the classic, “The Good In Everyone.” Just a fantastic performance by one of the greatest bands around. Sloan continues their Navy Blues tour and it’s a show that’s definitely one not to miss.

Here are some more photos of Sloan performing at the Union Stage on Feb. 22, 2020. All photos copyright and courtesy of David LaMason.