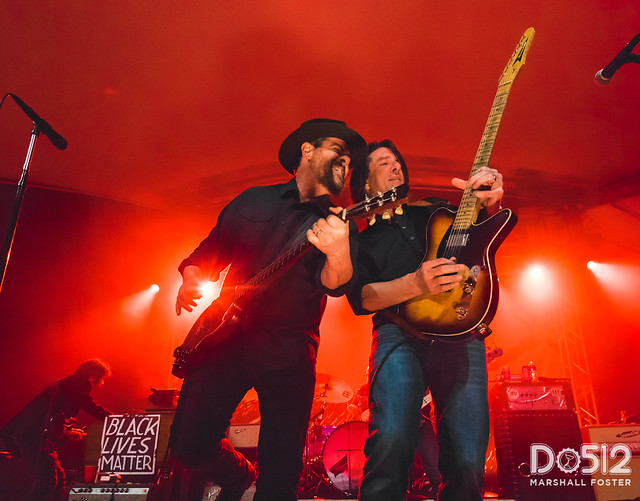 Late last month, the Truckers released their latest studio album, The Unraveling, a brutally honest and unflinching yet ultimately compassionate response to the tough circumstances many Americans find themselves in today. “Heroin Again” is a blistering polemic about the opiate crisis, while “Grievance Merchants” castigates those who exploit the anxieties of white men for their own gain.

Even in songs that are less overtly political, the material from The Unraveling excavated the dark corners of American life at 9:30 Club on Feb. 28. In “Rosemary with a Bible and a Gun,” Patterson Hood sang of “Descending all our hopes into despair.” In “Slow Ride Argument,” Mike Cooley somberly intoned, “You can’t go home again.”

Introducing “Thoughts and Prayers,” Patterson called attention to their opener Buffalo Nichols’ hometown of Milwaukee, Wisconsin, where seven peopled were recently murdered in yet another mass shooting. “We’re doing our best,” he said sarcastically. “We’re sending our thoughts and prayers.”

Stream The Unraveling by Drive-By Truckers on Spotify:

The Truckers skillfully tied all this darkness to fighting for the American dream. “There’s something to be said for hangin’ in there / Past the point of hangin’ ’round too long.” Patterson sang in “Armageddon’s Back in Town.” In the title cut “The Unraveling Is Happening,” they declared, “There is hope in the roar of a thousand pleading cries.” Even as so many continue to struggle, they haven’t given up on the promise of America.

The set opened on a political note with Mike Cooley’s “Made Up English Oceans,” written about the day both Jimmy Carter and the KKK came to his hometown. They sounded a defiant note with “Surrender Under Protest,” and they took up issues of the border and security with “Ramon Casiano.”

While covering Warren Zevon’s “Play It All Night Long,” Patterson paused to address President Trump’s border wall. “I remember when this country stood for tearing down walls,” he said, referencing Ronald Reagan’s admonishment to Mikhail Gorbachev to “tear down that wall.” He posed the question, “Is that wall to keep them out or to keep us in?”

The set included one more cover, the Ramones’ “The KKK Took My Baby Away.” They ended with three audience favorites, “Lookout Mountain,” “Zip City,” and “Angels and Fuselage,” foregoing an encore.

The 9:30 Club was packed with rabid fans for the show. The man next to me was attending his 98th Truckers concert, while a couple of guys behind us sang along to the lyrics — perfectly — all night long. It was a well-deserved reception for one of America’s great rock bands.