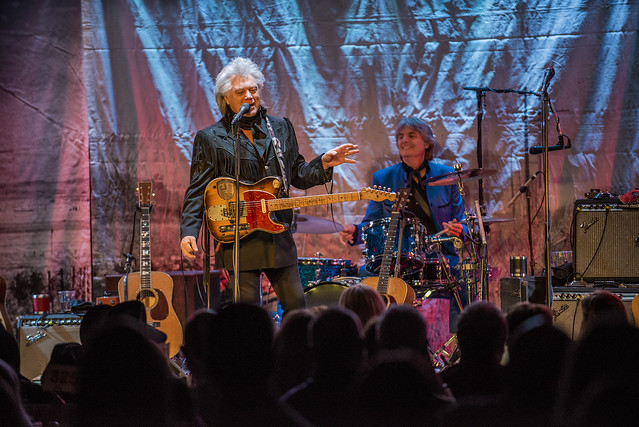 If you have even the slightest interest in country music, you owe it to yourself to see Marty Stuart and His Fabulous Superlatives. The Fabulous Superlatives — “Cousin” Kenny Vaughan on guitar, “Professor” Chris Scruggs laying down the bass, and “Handsome” Harry Stinson keeping the beat on the drums — are an all-star team of Americana players. Marty is a former child prodigy who was already playing professionally with bluegrass legend Lester Flatt as a teenager.

Together, the band celebrated the 20th anniversary of Marty’s album The Pilgrim at The Birchmere on Feb. 27. In the early ’90s, Marty achieved wide popular and mainstream radio success. But, as the decade drew on, he fell out of favor at country stations. At first, he continued to chase that success, but as his mentors, Lester Flatt and Johnny Cash, taught him, you don’t chase, you lead.

Marty had also become dissatisfied with the type of music he was playing at the time. “It wasn’t country, it wasn’t rock,” he said. “It was just loud.” Marty, who features prominently in the recent Ken Burns documentary “Country Music,” has a real commitment to preserving and interpreting the broad traditions of the country music genre. A skilled photographer, Marty has been documenting country music history with his incredible shots for more than four decades. He’s also acquired a huge collection of country music memorabilia, which he’s turned into a museum.

A concept album, The Pilgrim is a country opera based on a story from Marty’s hometown of Philadelphia, Mississippi. The town beauty Rita, defying her parents, marries a crazy ne’er-do-well, Norman, and he becomes possessive and abusive. Rita works at the local hospital, where she meets and befriends the titular Pilgrim.

Rita does not tell the Pilgrim that she’s married. Although nothing physical happens between them, they do fall in love. Norman learns of this and writes a letter to Rita. He gets his gun, and he goes to the hospital. There, he hands Rita the letter, then turns the gun upon himself.

Stream The Pilgrim by Marty Stuart on Spotify:

As Marty remarked, this is a country song if ever was one. He added, “Ken Burns and I agree it’s about the stories.” The album progresses through nearly all types of country music, from Appalachian mountain music to bluegrass to outlaw country and even a bit of gospel. Its impressive guest list includes Johnny Cash, Ralph Stanley, Emmylou Harris, George Jones, and Connie Smith, who is now married to Marty.

While the album earned excellent reviews, it was not a commercial success. In the aftermath of its failure to sell, Marty was released from his major label contract. It became a transition point in Marty’s career — it led to him focusing on his artistry and becoming one of the most respected figures in Americana and roots music.

For the first time in “this part of the country,” Marty performed “Even Trains Have to Cry.” The band had the audience clapping along to “Red, Red Wine and Cheap Blue Songs.” “Observations of a Crow,” Marty told the audience was based on spotting a crow nesting near a truck stop one day. “I love crows,” Marty said, “because they’re weird and strange and they dress like Johnny Cash.”

Marty also played early tracks from the album “Sometimes the Pleasure Is Worth the Pain” and “Reasons.” Concluding with the title track, he told the audience how the Pilgrim became an alcoholic and a hobo, working his way across the country to the west coast. The story ends happily, though, with the Pilgrim returning to Philadelphia and marrying Rita.

Before covering this material, Marty and the Superlatives played a variety of songs from across his career. They opened with the instrumental “Graveyard,” following it with the title cut from Nashville, Vol. 1: Tear the Woodpile Down. Marty pointed at Kenny with both index fingers during his guitar solo, eliciting a round of applause from the crowd.

The crowd really started to come alive, clapping along to “The Whiskey Ain’t Workin’ Anymore.” Next up was “Tempted,” introduced by Marty as one of his old radio hits. “What do you think of the Superlatives?” he asked the crowd, who roared in response. “You have good taste,” Marty said with a smile.

Introducing the instrumental “Mojave,” Marty declared The Birchmere “the surf music capital of the world.” “Mojave” is a track on the critically acclaimed 2017 album Way Out West, which Marty described as a “blue sky psychedelic” tour of the western United States. “It will make you feel like you’ve been on Willie’s bus for 21 hours,” he added.

Gathering around a single mic, Marty and the Superlatives performed the acoustic “Old Mexico” from the same album. Before turning things over to the Superlatives, Marty sang “Six White Horses,” a tribute to country music greats who have passed on.

One of the fun aspects of this show was how Marty really took advantage of the individual talents of his band, allowing each member a turn to sing lead, beginning with Kenny, who sang his “Country Music Got a Hold on Me.” Chris performed the Bob Wills tune “Nice Like That,” and Harry took it “up north Texas to Oklahoma” for Woody Guthrie’s populist ode to outlaw “Pretty Boy Floyd.”

The Superlatives left the stage, and Marty picked up his mandolin. Before he played “Orange Blossom Special,” though, it was storytime: Marty recounted his longest bus ride, back in his teens when he was touring with Lester Flatt. The bus left Halifax, Nova Scotia on a Wednesday, and it got to its destination in Florida on Sunday.

From the bus, Marty spied a curious-looking older man. One of the other men on the bus asked him if he knew who it was. “No,” said Marty, and his bandmate explained that it was Ervin T. Rouse, who wrote the fiddle standard “Orange Blossom Special.” By the time Marty met Ervin, Ervin was in somewhat poor mental condition. Marty recalled how he always referred to the song as just “The Special.”

A standing ovation followed the set, and the band came back to play “Time Don’t Wait,” which earned them a second ovation. Leading into the last piece of the night, “Hobo’s Prayer,” Marty joked about how a waitress had mistaken him for Howard Stern. I guess the audience was pretty happy with the show: They gave Marty and the Superlatives a third standing ovation before clearing the music hall.

This has become one of my must-see shows every year. It’s hard to overemphasize the skill of these musicians and just how well they work together. Their coordination on vocal harmonies is absolutely stunning. And above all, their shows are fun: The crowd showed due respect, but they had a foot-stompin’, hand-clappin’, singing-along-the chorus damn ol’ good time. If you want to experience the pure essence of country music, this is the show for you.

Here are some photos of Marty Stuart and His Fabulous Superlatives performing at The Birchmere on Feb. 27, 2020. All photos copyright and courtesy of Rashad Polk. 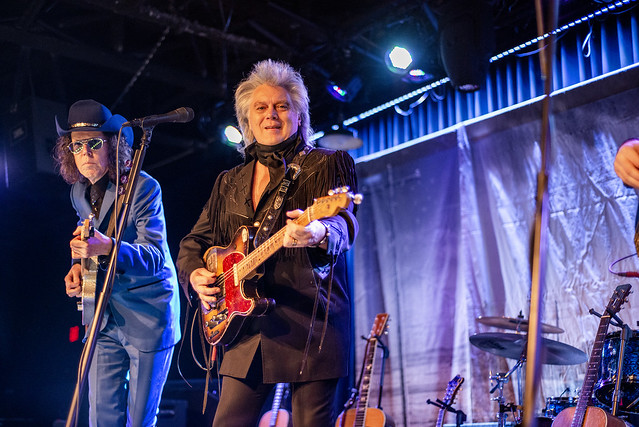 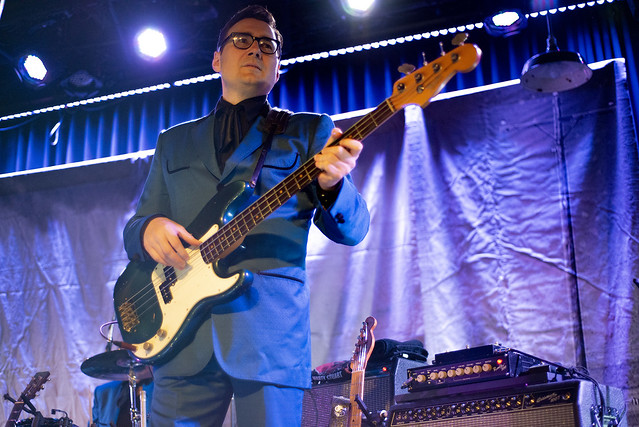 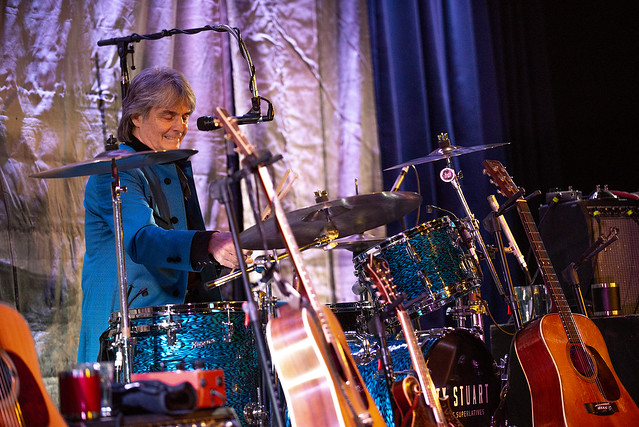 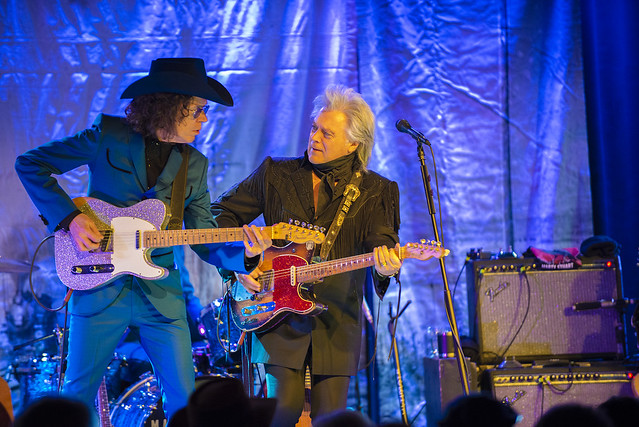 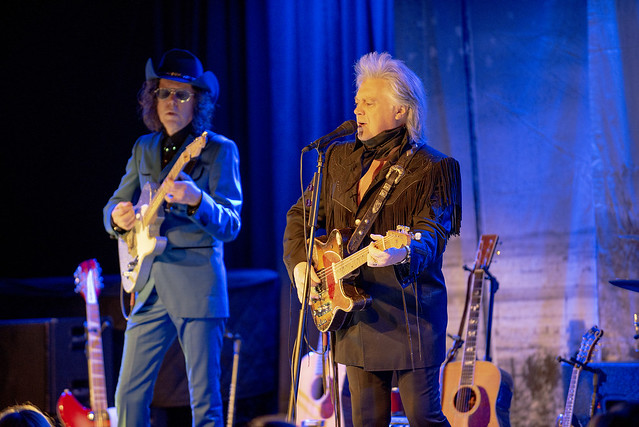 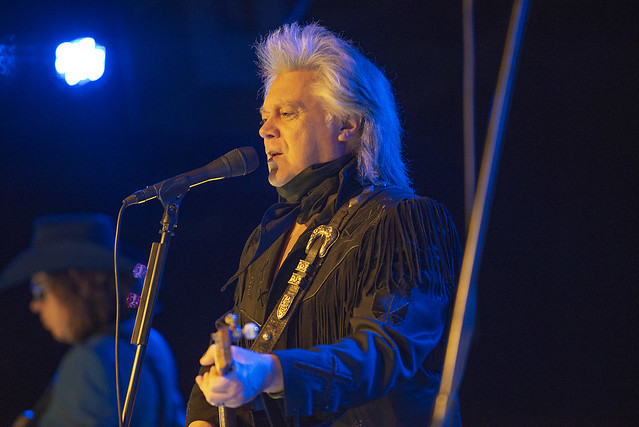 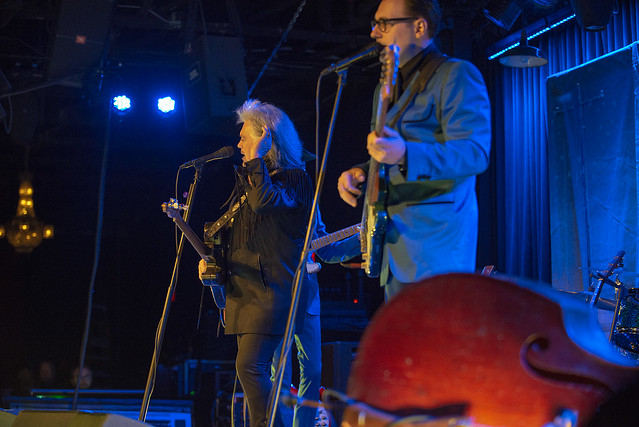 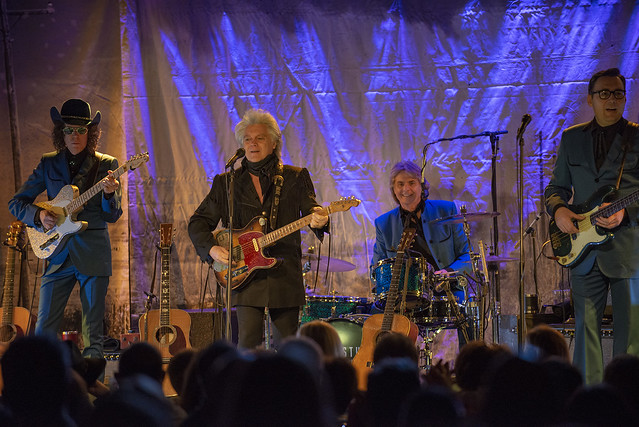 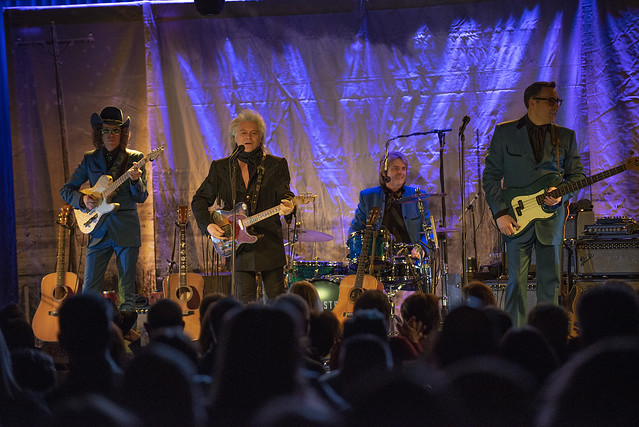 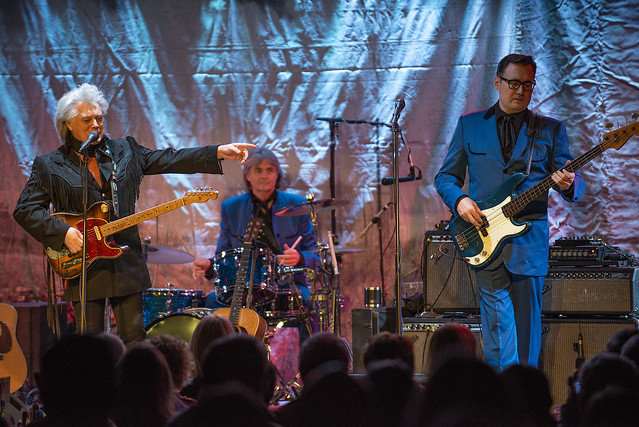 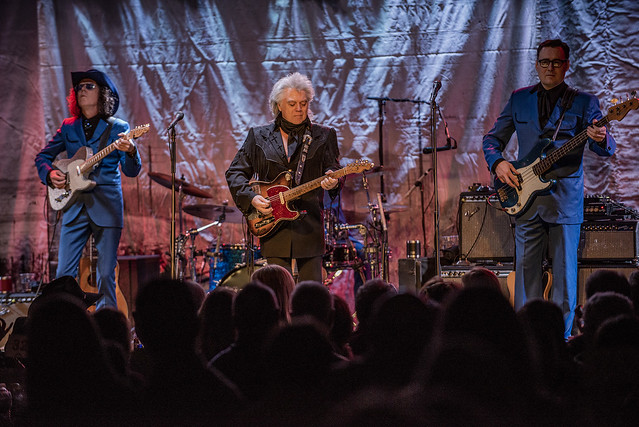 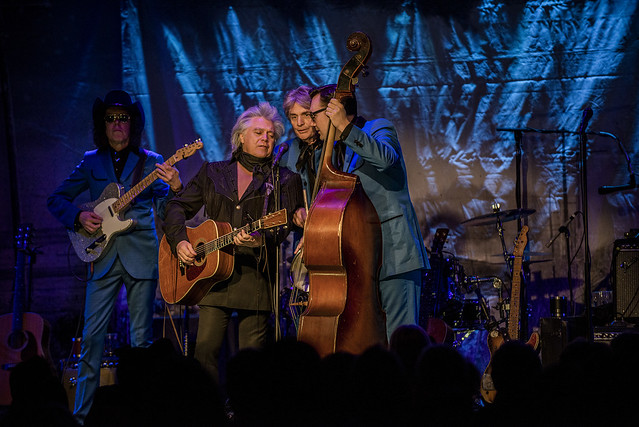 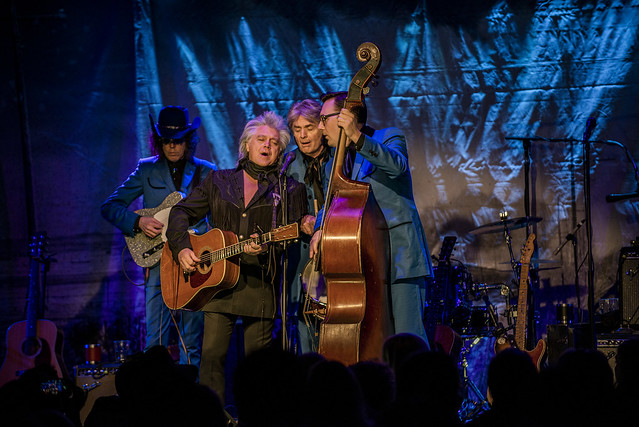 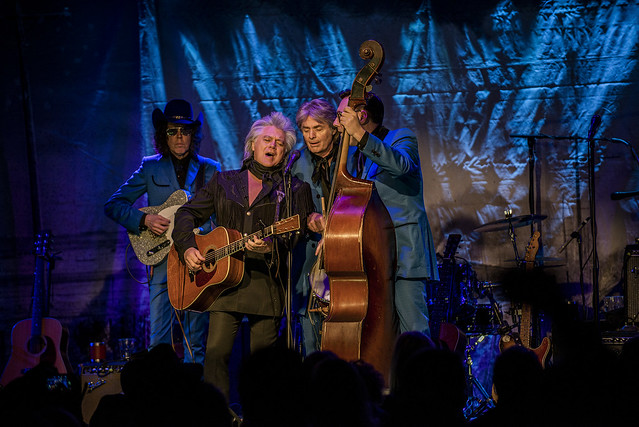 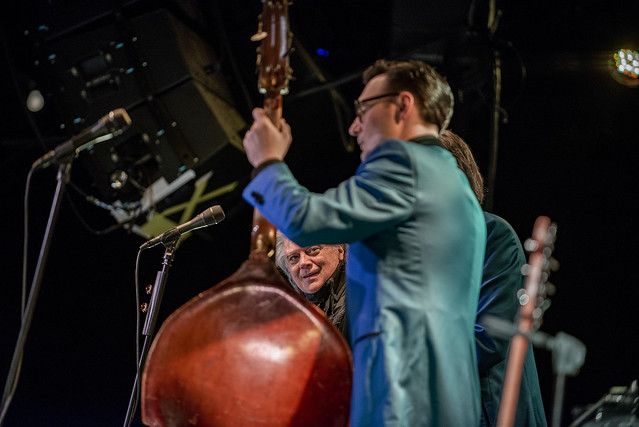 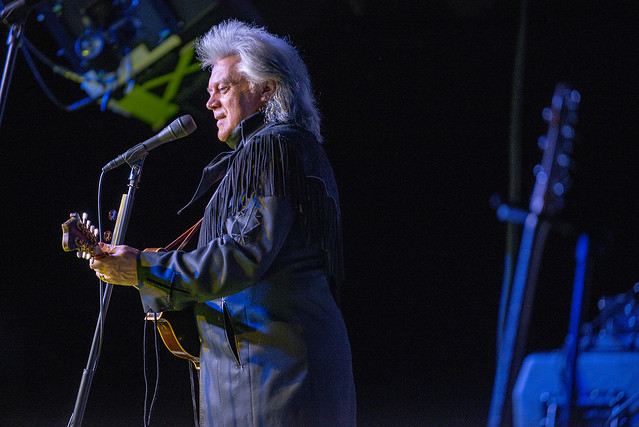 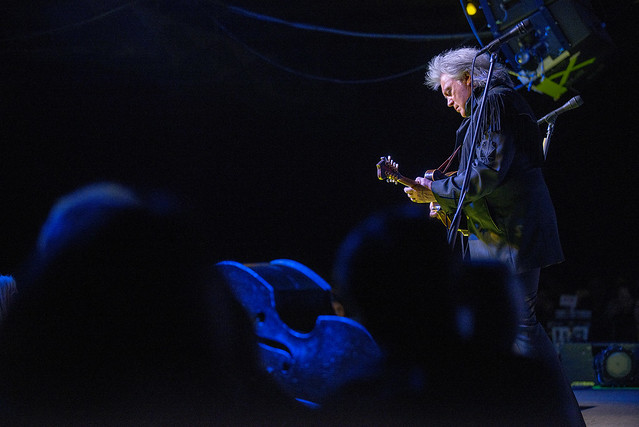 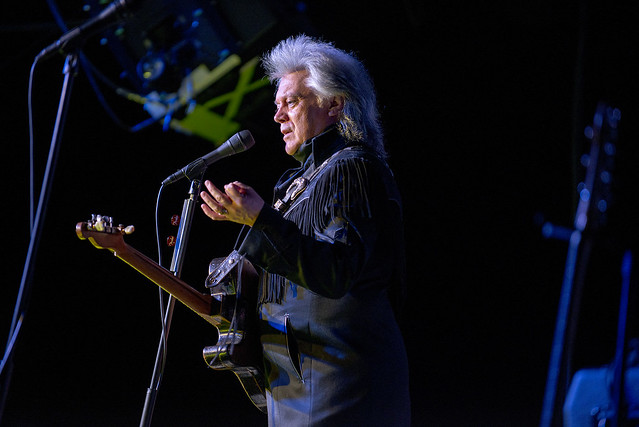